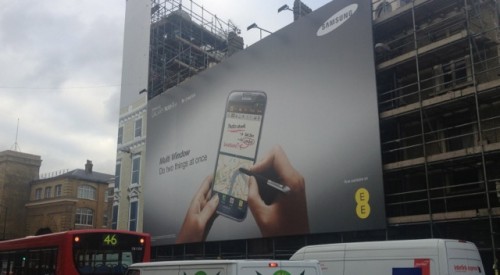 There is a billboard covering a building outside London’s Kings Cross Station. It proclaims: “Multi window: do two things at once.”

The product is the Samsung Galaxy Note II LTE. The feature it describes is the ability, in certain apps, to split the screen between, say, a video in the top half and a web page in the bottom half.

Will this make users twice as fast? Unlikely.

Multi-tasking is illusory. Try watching a video while reading a document at the same time. Stop, and try to recall the last few words that were spoken in the video or written in the document.

Advances in processors and network speeds enable several concurrent functions on a device, or across multiple devices, but the brain itself is unable to absorb them. Instead of multi-tasking in parallel, the brain switches between the different tasks more rapidly, but does so to the detriment of attention levels.

It is a state known as continuous partial attention.

Mobile devices, used in isolation, have hitherto been free from this because it was impractical to have multiple tasks in the foreground on a small screen. However, the increasing pixel density of displays and larger physical screen sizes has brought multi-window environments close to theoretical feasibility on mobile phones.

Designing for continuous partial attention is something we’ve been looking at for some time as part of MEX Pathway #2, entitled: ‘Advance best practice for multi-touchpoint experience design‘. At first glance it may seem to be a challenge of making design choices better suited to partial attention states, but it also raises the question of whether it is, in fact, more sensible to create experiences which disallow partial attention altogether?

Multi window on the Note II would seem to be a step in the opposite direction.