The move to open mobile operating systems is accelerating, driven by growing awareness in the operator community that these platforms can lower their costs and encourage the development of a value-added services ecosystem. 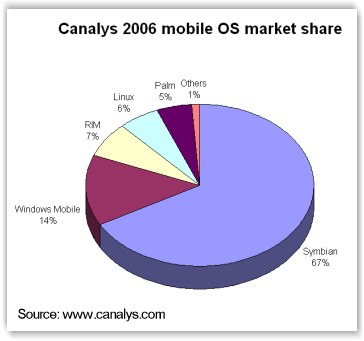 According to Canalys, worldwide shipments of open OS smartphones rose 63% from 2005 to 2006, accounting for approximately 64m units. Symbian had the lion’s share of this market at 67%, with Microsoft a distant second with 14%. RIM took 3rd place with 7%, Linux with 6% and Palm on 5%. Shipments in the 4th quarter of 2006 rose to more than 18m, suggesting there will be further growth in 2007.

The objective of network operators around the world is to source devices at the lowest cost while still providing a platform for deploying compelling value-added services. They also want to minimise their ongoing support costs and ensure their supply chain is strategically managed so as not to become too reliant on any one manufacturer.

Open OS platforms fulfill many of these goals.

While the cost of components in open OS handsets is typically higher than devices produced using a manufacturer’s legacy platforms or a reference design from a chipset vendor, the overall R&D investment to develop a new product is falling rapidly.

Chipset manufacturers such as Freescale and TI work closely with the open OS developers and handset vendors to create reference designs which can be re-used and customised across a broad portfolio of devices. This reduces time-to-market and increases the economies of scale for sourcing components. By standardising at this level of the value chain, cost benefits cascade down to subsequent levels, enabling other component providers and software developers to reduce their costs by working on a handful of mass volume platforms.

The result is a more competitive handset market, where device vendors can tap into a range of standard components and use them across a portfolio of devices. This encourages price competition among the manufacturers as they play-off against each other to win major supply contracts with the operators. As standardisation increases, the barriers to entry fall for new manufacturers who want to use open platforms, thereby limiting the operator’s reliance on individual handset companies.

Symbian has been in business for nearly 10 years and Microsoft has been offering a mobile platform for almost the same length of time, but it has taken some time for these OS to gain mainstream acceptance. Growth has been constrained by the cost of the high-end processors and components required by open OS devices, a tendency for manufacturers to focus their products on lower volume business markets and the relative complexity of their user experience.

These issues are gradually being resolved and as each metric starts to fall into line with industry expectations, a period of rapid growth for open OS platforms beckons. IDC predicts open OS smartphones will reach annual volumes of approximately 250m by 2010.

This will create new strategic challenges for handset manufacturers and network operators. Traditionally, both operators and device vendors have been concerned by control of the applications and interface layer. This is seen as a key part of the mobile experience. Companies which can exert the most control over this area capture the majority of the value in the business.

Symbian, the leading provider of open OS platforms, was formed by Nokia, Ericsson, Motorola and Psion in 1998 in direct response to the perceived threat from Microsoft’s mobile strategy. These major manufacturers did not want to see their businesses commoditised by Microsoft, as had occured in the PC industry.

However, the direction and ownership of Symbian itself has been dictated largely by fear of ceding control of the interface layer. Symbian originally began work on several interface specifications which would standardise screen dimensions and applications packages. These would have been available to all manufacturers.

Instead, Symbian’s handset manufacturer investors forced the company to step back from developing interfaces and concentrate instead on the core OS. Nokia and Ericsson developed their own interface layers – Series 60 and UIQ – which they began to license separately. The twists continued as Ericsson sold UIQ back to Symbian, where it ran as an independent subsidary. To complete the circle, Sony Ericsson recently re-acquired UIQ and it is now part of the Swedish-Japanese joint venture once again.

Nokia’s third party licensing efforts for Series 60 have stalled and the Finnish manufacturer now accounts for the vast majority of Series 60 shipments. It has also increased its stake in Symbian, leading to concerns that the OS provider has essentially become a Nokia subsidary.

However, operator’s concerns over whether open OS platforms provide manufacturers with too much influence over the interface layer seem to be alleviating. Vodafone is working with Nokia to deploy a customised version of Series 60 across its handset portfolio. Hutchison 3G has launched its first X-Series handset on both UIQ and Series 60 devices.

The traditional perception of open OS meaning an identikit UI dictated by the software developer or handset vendor has been replaced by an understanding that open platforms can actually equate to greater customisation potential and lower costs.

Of course, handset manufacturers aren’t simply abandoning their efforts to maintain their share of the value. Instead, there is an increasing focus on providing a few key applications closely linked to the hardware design and software package. Research In Motion has advocated this strategy for some time, focusing on specialist devices closely linked to its enterprise email service and commanding a considerable premium for doing so.

Nokia is also exploring several connected services which will enable it to increase the attractiveness of its devices to consumers, generate revenues from subscriptions and control the user experience. It acquired navigation software vendor Gate5 in 2006 and has started embedding the technology, along with GPS functionality, in some its handsets. Existing users can also download the application for free. Nokia derives its revenues from selling additional mapping components and location guides through an integrated mobile storefront.

Apple, is ploughing its own furrow with by investing heavily in developing its own operating system, UI, applications package and a suite of connected services. It believes it can differentiate through unique design and user experience, enabling it to command a premium price for its products.

Palm is also steering towards a similar strategy. Last year it bought back the rights to the operating system it previously owned from Access, the Japanese company which acquired former Palm subsidary PalmSource. There are rumours it is now working on developing its own next generation platform at the same time as producing Windows Mobile smartphones. Palm hired the highly regarded Apple UI engineer Paul Mercer a few weeks ago.

Developers have been clamouring for truly open and standardised platforms for years. The cost and complexity of deploying an application across the full range of devices available in just a single national market is prohibitive for all but the largest companies. This fragmentation of software platforms and hardware specifications also holds back innovation by forcing developers to use ‘lowest common denominator’ options like simple XHTML sites or basic Java applications to reach the largest audience.

This impacts the economics of developing mobile applications in several ways: firstly, it is difficult to achieve volume distribution without maintaining numerous versions for different handsets. It also means each application can typically do less, so developers can’t charge as much for it. It’s a negative spiral of lower revenues per application, less investment and increasing costs.

As the move towards standardised platforms increases, developers should find their lives becoming easier. Canalys predicts a cumulative total of 1 billion open OS smartphones will have shipped by 2012, providing third party developers with a truly mass audience to target through just a few OS platforms.

I believe the adoption of open OS platforms will cause a change in the dynamics of differentiation in the mobile value chain. Operators will need to differentiate through price competition, customer service, supporting the most active developer communities and providing access to the widest range of applications. Handset manufacturers will focus increasingly on industrial design and a portfolio of connected services tailored specifically for their devices. Platform vendors will find themselves increasingly concerned with pre-integration relationships with chipset vendors, providing tools to developer communities and standardisation collaborations.

The diagram below illustrates. You can download a PDF copy here. 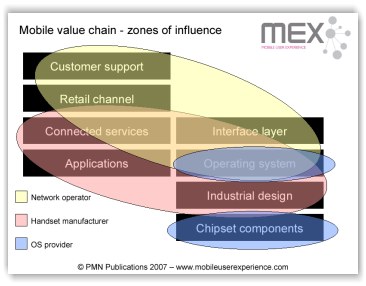 We’ll be tackling many of these strategic issues at the MEX conference in London on 2nd – 3rd May 2007. Customisation and open platforms are central themes of the conference, with several panel discussions and breakout groups focused on these areas. Speakers include Nick Allott, CTO of operator-funded interface requirements group OMTP, Herbert Vanhove, Vice President and General Manager, Qualcomm Internet Services & MediaFLO Technologies, Al Russell, Head of Mobile Internet & Content Services, Vodafone and Matthew Menz, Head of Interaction Design, Motorola. We hope you’ll join us for the debate.