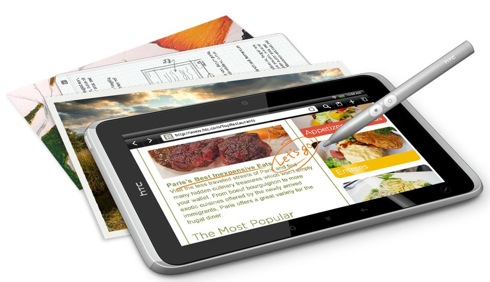 The LG Optimus Pad and HTC Flyer announced at Mobile World Congress 2011 are distinct from the iPad in offering a more elongated form factor, roughly approximating a 16:9 screen ratio.

This shape gives two clear modes. Horizontally, it is used two-handed, grasped firmly on either side. Alternatively, it may be rested on a surface. It is not practical to hold with a single hand in this orientation.

Vertically, the reduced width makes it comfortable to hold with a single hand, while the other is used for interaction. This is different to iPad, where the extra inch from left to right makes it feel unbalanced to hold horizontally with a single hand.

As a general observation, users tend to find square shapes more difficult to hold than rectangles. I wonder if this 16:9 aspect ratio will emerge as the dominant shape for the future for tablets? I’d be interested to hear comments for and against on the blog.