LiquidText is an iPad app which allows the creativity and speed of free-hand annotation to co-exist with the benefits of structured digital notes.

The interface is divided into two, resizeable sections. Content, such as a PDF or Powerpoint, is consumed on one side, while the other side houses an infinitely extendable workspace for creating notes and establishing relationships.

A typical workflow might be to highlight a piece of text within the content, then drag it across to the workspace. This automatically establishes a digital marker, linking to the source location within the original document. This reference may be further annotated and cross-linked with others. Notes may be sketched with a stylus or typed with the keyboard.

The interface is deceptively simple and succinctly explained in an opening tutorial, but dig deeper and there’s a wealth of features. For instance, a pinch gesture on the document can be used to collapse lengthy text into just the areas which have been annotated. Graphical objects can be lassoed and pulled into the workspace alongside text. 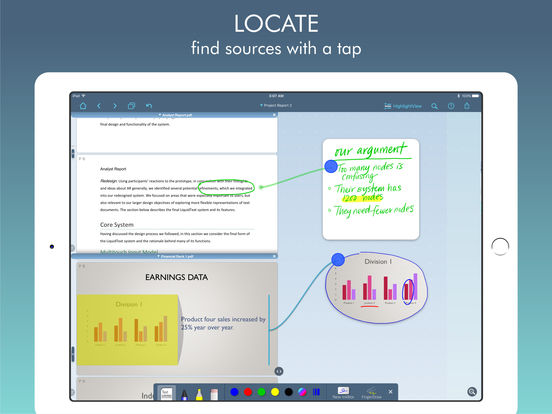 I’ve selected it as a #mexDTI inspiration for several reasons, not least because it closely echoes the findings of our earlier MEX intersection project, where we explored user experience at the pivotal moment between consumption and creativity.

There are well established design patterns for user behaviour when consuming content. Similarly, there is a separate set of familiar UI conventions for creative endeavours. MEX has explored these ‘user modes‘ extensively, defining them as the elemental states of digital behaviour. However, few apps manage to effectively combine multiple states in the same interface.

Tablets, despite slowing sales figures, potentially offer the most flexible environment for these intersection moments and I find myself increasingly interested in the signs of renaissance: the power and fidelity of the iPad Pro and Apple Pencil, Lenovo’s clever Yoga Book with its hybrid laptop and paper approach and Microsoft’s Surface line-up.