Yesterday was a big day for Nokia: it announced the 5800, its first touchscreen handset for the consumer mainstream, launched the ‘Comes with music’ unlimited download offering and revealed the 5th edition of the Series 60 platform, along with a new SDK for developers.

There has been no shortage of hype, analysis and blogging from the industry already, but what does all this news actually mean for the end customer and how does it sit in the wider picture of Nokia’s user experience strategy?

In a series of articles over the next few days I’ll address each announcement in turn and then finish with a summary analysis of the implications for Nokia’s future development and the mobile industry as a whole. 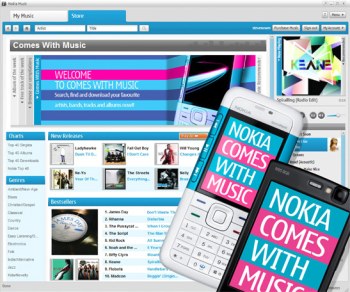 Starting 16th October 2008, users will be able to buy a Nokia 5310 bundled with the ‘Comes with music’ service from Carphone Warehouse in the UK. It will cost GBP 129.95 on Pay-As-You-Go and require a minimum monthly top-up of £10 on voice and text to keep the account active.

This will allow customers to download an unlimited number of tracks from the service for a 12 month period to both their PC and their mobile phone. At the end of the year, they will be able to keep all of these tracks and even transfer them to another device. However, if they still want to download new tracks without buying them individually, they will need to buy either an extended subscription or a new ‘Comes with music’ handset.

There are a few interesting facts worth noting about this:

– Carphone Warehouse will also offer a monthly contract version, where the handset is supplied free on most tariffs above GBP 40 per month.

– Activation of ‘Comes with music’ requires a PC, where the user enters a pin code supplied in the handset packaging. It is not possible to activate the service directly from the phone, but once activated tracks can be downloaded straight to the handset.

– Nokia’s Executive Vice President of Entertainment, Tero Ojanpera, was keen to stress the ‘no catches’ approach adopted by the company – once you’re registered, the prices actually ‘disappear’ from the storefront and you can genuinely download as many tracks as you want for a year. There are no hidden charges, it is all included in the price.

For the first time in the portable audio and mobile phone business, a user will be able to buy a device which enables them to pay a single price and then forget about the cost of music, but still keep everything they download at the end of the deal.

That makes ‘Comes with music’ a unique and highly attractive proposition – for certain segments of the market. I can see it having strong appeal for younger customers (under 21), for whom cost is a major factor and where their purchasing decisions are unlikely to be affected by an existing contract or a company paying their bill for them.

I undertook some informal polling with people outside the mobile industry to see what their reaction was to Nokia’s headline offer of a GBP 129.95 Pay-As-You-Go 5310 and unlimited music for a year.

The question asked was: “Would you pay £129.95 for a Nokia phone that lets you download an unlimited number tracks to both your PC and your phone for 12 months?”

The responses were quite revealing of the challenge Nokia faces. Here are some user quotes:

“For me, I would need it to be compatible with iTunes and my iPod. I don’t want to have to deal with two separate libraries.”

“Is it really unlimited?”

“I read that Nokia were doing this to combat the iPhone.”

“Corporate users like me won’t be interested, as I have my bill paid for me by work and I have to use what I’m given.”

“‘Any song you want’ is a mighty claim! When you said its unlimited, what you really meant was unlimited until I started downloading the whole catalogue!”

“If it is compatible with iTunes, and I can get it worked into my existing deal, I will definitely do this.”

Most responses were characterised by a sense of caution – people seemed to feel there must be some sort of caveat involved. Reactions were also significantly distorted by individuals existing experiences with iTunes, the iPod and iPhone.

If you put yourself in the position of a customer who does not already have an existing music library within iTunes or another proprietary system, Nokia’s offer is attractive. The purchasing psychology works very well in this scenario: you pay a set price to buy a physical object (i.e. the handset) and then you get a year of unlimited downloads for ‘free’.

Of course, customers will know deep down they’re not getting a free lunch in the long-term, but users rarely make rational purchasing decisions. The concept of a service which has unlimited ongoing benefits but no ongoing charges is attractive. The appeal of offers like this is likely to increase as consumer behaviour in developed economies turns away from the credit-based products and monthly repayments which characterised the recent credit bubble.

However, many customers have already made investments in building up a music collection on other, proprietary platforms. iTunes is the obvious example. These investments comprise both a financial commitment and the time spent building playlists and organising tracks. The greater the level of this investment, the less likely users will be to switch to a new system, even if they do get unlimited downloads as part of the deal.

I suspect Nokia is already well aware of this and that would explain the choice of the 5310 for the first ‘Comes with music’ launch. It is a product squarely targeted at teenagers and students, the kind of people who either have large libraries of ‘DRM-free’ tracks they can easily move to the Nokia handset or no particular ties to a music store like iTunes.

Nokia will face a much more difficult challenge to convince older consumers, especially those who are already tied into iTunes and the iPod. In addition to the proprietary nature of the Apple system, which will make customers hesitant to switch if they are unable to take their music with them, there is also the user experience investment to consider. Apple’s distinctive UI provides a high barrier to switching to another platform.

It is worth noting there’s nothing to stop Apple adopting a similar business model and providing an unlimited music subscription with its iPod or iPhone. If the financial terms of the offers were the same, I suspect – at present – most users would choose Apple over Nokia on the strength of its industrial design, software interface and the size of its music catalogue.

The Apple system provides an incredibly high benchmark for Nokia to overcome. Adopting innovative new pricing models is a great start and shows a strong awareness of the breadth of user experience issues by the Finnish manufacturer. For a number of market segments, price will be one of the biggest influencing factors in the customer experience.

However, innovative new pricing models are easily copied. Nokia needs to continue to invest in the other elements of the user experience.

Today, the Nokia on-device music player software, storefront and PC companion application are poor subsitutes for the Apple equivalents. To succeed in the long-term, Nokia will need to marry its pricing power with great hardware, improved applications and a slick and consistent UI. They will also need to discover the ‘secret sauce’ which glues all of these elements together and forms something greater than the sum of its parts. That’s what Apple has today with iTunes and that is why it remains so popular with users.

We shouldn’t forget other potential competitors. Google and Amazon have already partnered to bring royalty free MP3 downloads to the G1 handset on the T-Mobile network. There is the potential there to develop an advertising-supported music service.

Microsoft also announced yesterday it was planning to bring its Zune music system to Windows Mobile devices, most likely with version 7.0, currently planned for release in mid-2009.

The music industry has recognised the urgency with which it needs to explore new business models. Nokia’s ‘Comes with music’ is likely to be the first of many ideas music companies try to stem the revenue decline they have suffered since the advent of digital downloads.

Once Nokia’s competitive advantage in pricing has been eroded, and it is inevitable that it will be, it will need to focus on several other key elements of the user experience to ensure long-term success:

– Using its scale, purchasing power and expertise in supply chain management to produce lower cost music handsets than its competitors. The sheer number of handsets Nokia ships each year (circa. 400m) should enable it to bring to market a wider range of more affordable devices. It should also allow it to drive a better bargain with the music labels on the trade price of the unlimited music subscriptions packaged with each handset.

– Invest in developing a uniquely Nokia music experience. Nokia has some of the most talented mobile telecoms engineers in the world and they should be tasked with creating media features which combine unique communications functions. Sony Ericsson has already demonstrated some of the ways this can be done, with features like ‘shake to shuffle’, taking advantage of motion sensors embedded within the phone. Simply trying to emulate the market leaders or playing ‘spec sheet tag’ does not lead a sustainable advantage.

– Task the ‘Comes with music’ product team with solving the iTunes portability problem. If Nokia wants to be truly disruptive in this marketplace, it should look to integrate features into its own music management software which allow tracks and playlists to be easily ported across from iTunes. DRM is obviously a roadblock issue here, but there are already many third party products which allow easy porting of the DRM-free tracks and playlists. Maybe some clandestine Nokia support for the less ‘mainstream’ products which automate some of the manual ways you can overcome DRM would also be prudent…

– Focus on making the experience as rich as possible on the handset itself. iPods derive their strength from the link with iTunes on the desktop. There is an emerging generation of younger customers for whom the mobile is the centre of the digital universe and the PC is seen as an impersonal and ‘adult’ device. Nokia could establish long-term differentiation and make its products highly attractive to these future customers by focusing on making its music offering highly accessible from the phone.

In part II of this article, we will look at the 5800 handset and how successful Nokia has been with its first touchscreen implementation of Series 60. Stay tuned for this next week.

In the mean time, please contribute to the debate and discuss of this issue by posting comments on our blog. I’d be happy to address any specific questions anyone has about this, so please feel free to ask about any elements where you’d like further insight…