Novel concepts were not absent from Mobile World Congress 2017, but the honeyed lamplight of nostalgia proved the stronger lure for journalists:

Last year, I singled out nostalgia as one of the key societal trends influencing UX in an essay published ahead of our MEX/16 conference:

“We might interpret this as a failure of imagination and a sign that mid-20th century designers represented a zenith we’re unable to surpass. I favour a different view: this [nostalgia] is experience design at the intersection of commercial creativity, brand development and customer insight.” — from the essay ‘Industrial rhythm, migration, nostalgia: the societal fabric enveloping UX‘

Don’t say I didn’t warn you!

Holly Brockwell, technology journalist and founder of Gadgette, summed up this year’s Mobile World Congress in a tweet:

“The Nokia 3310, casually obliterating all the flagships of #mwc17.”

She accompanied it with a Google Trends graph showing how searches for the 3310 eclipsed those for the LG G6, Huawei P10, Sony XZ Premium and the Samsung Galaxy S8. 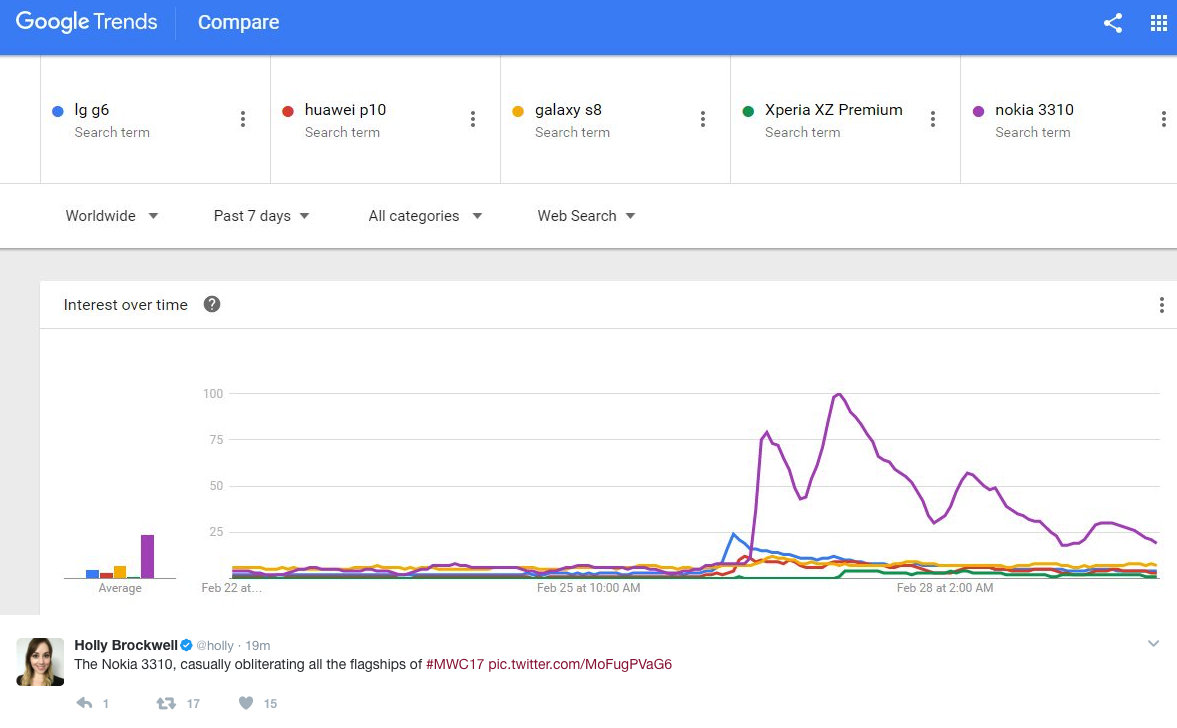 However, let’s not carried away. One of the complex virtues of nostalgia is that it is best enjoyed as an emotion rather than an enacted reality.

Nokia’s new 3310 will not tempt significant numbers of users to abandon their smartphones. It will likely be a commercial success for HMD, but it will remain niche.

Alex Guest, in his recent article for the MEX journal, discussed the user experience compromises inherent in retro phones after trying a ‘digital detox’ with the Punkt MP01, a phone with even fewer features than Nokia’s 3310. Suffice to say, basic isn’t always better.

Alcatel TCL’s Blackberry-branded KeyOne will also be niche. The product has rightly garnered praise for its physical keyboard, performance and use of a QWERTY candy bar form factor to stand out amid a sea of generic touchscreen slates, but even with positive reviews, this design will appeal only to a subset of heavy content creators and a dwindling number of Blackberry fans.

Choice, however, is a wonderful thing and the user experience of its innovative keypad – which combines touchpad, fingerprint sensor and traditional keys – hints at a larger appetite for tactile feedback and one-handed ways to navigate content without touching fingertips to screen. While sales volumes of the KeyOne will be limited, the interaction concepts it explores may cause ripples in the market felt in more mainstream models.

The stylus has been re-emerging as a mobile productivity tool for some time, not least in Apple’s iPad Pro models. It speaks to the need among a premium minority of users for better creative options on the move, a trend we explored in our 2015 series on ‘Intersection: the pivot between consumption and creativity‘. This movement accelerated at Mobile World Congress, with stylus options from the likes of Samsung, Lenovo and Porsche Design adding to existing products from Apple and Microsoft. Samsung even continued to indulge the nostalgic desires of users by partnering with Staedtler to develop a digital stylus version of the ubiquitous black and yellow pencil many will remember from school days.

If there is to be a new phase of growth in tablets, it will require even further development of their creative powers.

Perhaps the greatest trip down memory lane was provided by a small British start-up, Planet Computers, which announced Gemini – a spiritual successor to the Psion Series 5. It is an Android-based clamshell mobile computer, with a QWERTY keyboard, 5.7 inch touchscreen and cellular connectivity.

Martin Riddiford of design agency Therefore, who helped design the original Psion product, has been brought in to lead the ID of the Gemini and the heritage shows.

The company easily reached its crowd funding target of $200,000 shortly after launch and as of 1st March 2017 was reporting $228,000 in funding, with a month remaining.

There has been nothing like this on the market for some years, but it speaks to the latent desire for truly pocketable devices suited to content creation rather than simply content consumption. Whether that promise is delivered through the rose-tinted spectacles of nostalgia or something novel, it feels like a positive development to see form factor choice return to the mobile market.