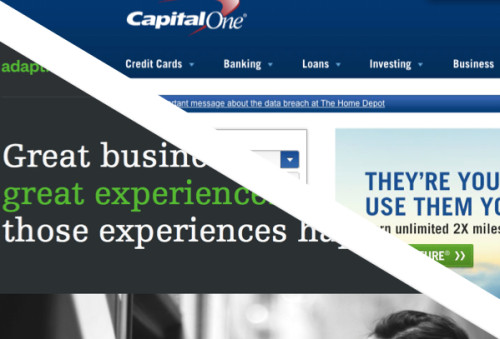 Capital One‘s acquisition of user experience agency Adaptive Path is indicative of the degree to which the financial services industry sees digital strategy as a competitive differentiator.

Reading between the lines, that is the goal of this acquisition: to buy a user-centred design agency and transform it into an in-house team capable of creating unique IP around Capital One’s digital customer interfaces.

It is a logical move when you consider how phones, wearables and other digital touchpoints will come to dominate customers’ financial interactions. Most financial institutions buy their digital platforms from third parties. Some employ internal teams to create their own, but they’re typically rooted in enterprise computing culture. None have tried to build platforms from the ground-up using the customer experience methodologies espoused – and in some cases, invented – by Adaptive Path.

The goal is worthwhile; the desired outcome, however, is unlikely.

It will also means sacrifices. Adaptive Path, with its events, publishing and culture of sharing best practice, made valuable contributions to advancing user experience methodology (and spoke several times at MEX over the years). Capital One’s acquisition specifically calls for this to continue, but I am skeptical. Even with the new parent company’s support, Adaptive Path will not be any more able to perform this role as part of Capital One than it would have been as an independent entity.

Indeed, all the risks to this particular role are on the down side: I predict events and other forms of community engagement (the ‘engine of ideas’ at the heart of any agency I referred to in a previous article) will be the first thing cut when Capital One goes through an inevitable cyclical downturn. It might be in 12 months, it be in 36 months, but eventually someone who prefers numbers to nuance will see a quick boost to the bottom line could be had by cutting back on these activities.

Of course, Adaptive Path and its new owner have no obligation to continue this path of community engagement, but perhaps selfishly, there will be many that hope it will. However, it does raise an important question: does making the transition to being an internal team obviate the need to run events and publish articles and books?

The answer to that lies in understanding how activities like these contribute to practitioners’ ability to create good design, be they working inside a company or part of a third party agency.

My belief, long held and shared in my article entitled ‘A model for nurturing ideas‘, is that the existence of these channels is essential. It creates a virtuous circle of exposure to new ideas, incentives to capture useful ideas which would otherwise be lost and motivates team members by ensuring the value of their work is increased by sharing it more widely.

Adaptive Path should not underestimate how big a challenge it will be to do this within an organisation like Capital One.

Setting aside the self interest of not wanting to lose a valuable community member like Adaptive Path, what of its ability to serve the purpose of their new owners? Will buying Adaptive Path help Capital One create a uniquely valuable set of digital experiences for its customers?

There’s no doubt Adaptive Path has done good work for various clients over the years. Like any organisation, it has also lost good people and experienced growing pains, but I still rate its capabilities. However, the nature of any acquisition is such that – even if it is superbly managed – it will lose more key members of the team to politics and job cuts during the transition. Hiring good new talent to replace them will be harder when the parent company is a bank, even if it pays better.

There’s also the painful transition from delivering specific, tactical projects as an agency supplying a client to the painstaking, long-term strategic challenge of transforming culture in a big organisation. That is exactly what Adaptive Path will need to do if it is to be valuable to Capital One. It is also extremely hard, something discussed by Thomas Foster at MEX in March 2014. He recounted his time leading user experience for one of the world’s largest investment banks, speaking of how people and teams were transient and it was only where he managed to preserve knowledge within specific, sustainable communities of practice that he felt he’d made successful long-term contributions.

Will Capital One understand that Adaptive Path’s capability for good design has been proportional to the diversity of client work it undertook? Will the new parent company allow it to continue working on a diverse portfolio? I’d say it is highly unlikely, not least because no one wants to turn around to the board after making such an acquisition and tell them the best way for the new subsidiary to contribute is to remain only half focused on the needs of the parent.

Such a notion brings us full circle: while it is easy to understand Capital One wanting to make this acquisition, it is harder to understand why Adaptive Path would think it will lead to a better quality of work in the long-term. There are other motivations, of course, and no one would begrudge Adaptive Path’s stockholders their opportunity to sell at a good price. However, those that are left working at Capital One two or three years later may look back with a degree of regret to days when their independence allowed ideas to be nurtured with greater fervour.

Adaptive Path should be remembered as a pioneer. It was early in grasping, developing and sharing the principles of user-centred design among digital industry. It was innovative in how it combined events, publishing and client work. Perhaps this latest move should be seen in the same vein: an unusual step which will provide others with a case study to learn from?