Usage of tablets is transitioning from information consumption to more creative endeavours. For a company such as Adobe, with an established base of customers familiar with its desktop products, there is a balance to be struck between moving existing functionality into mobile format and introducing entirely new features made possible by the unique aspects of tablet devices. 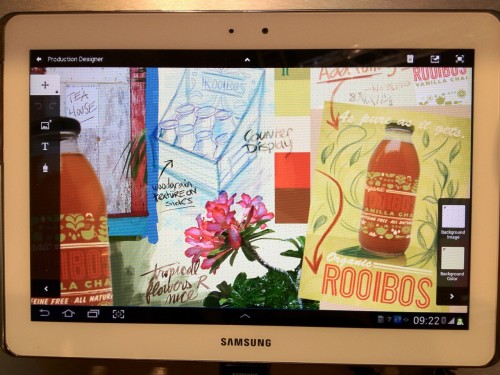 The demos I explored were running on Samsung’s new Note 10.1, which comes with a pressure sensitive stylus. This worked in some of the Adobe applications, such as Photoshop and Ideas, but not all. Also, the Note 10.1 I was using seemed to have a dead area in the centre of the screen where the stylus simply wouldn’t register at all. Pre-production hardware, perhaps, or interference from the security device attached to the centre of the rear casing? 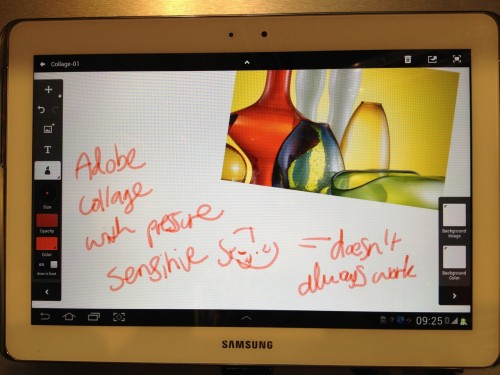 The most interesting of the Adobe apps were Ideas and Collage. Ideas is a simple, fast sketching tool which translated stylus strokes into vectors. A useful tool for designers on the go.

Collage allows users to combine multiple images and backgrounds, then easily sketch over them. Again, another tool to aid the design process.

How will digital design change as more users become equipped with tablet and stylus? In particular, will it allow more design work to take place in context, freeing practitioners to iterate their ideas in the actual environment they are designing for? Adobe also offers a tool for creating wireframes and mock-ups on tablets.

I’d like to see Adobe focusing on the intersection between tablet and desktop tools, continuing its earlier experiments with using tablets as mixing palettes and sketch books, or using the new sensory inputs on connected tablets to introduce entirely new creative possibilities.