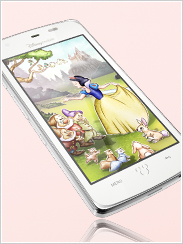 We’ve been looking at how 3D and visual depth can enhance the mobile user experience for some time now as part of MEX Pathway #4. One of the lessons we’ve already learned is that 3D content consumption alone is rarely enough to persuade users of the benefits: there’s a limited appetite for viewing the relatively small library of cartoons and feature films shot in 3D. The real attraction for users is when 3D is used to create new experiences which simply wouldn’t be possible on a 2D screen.

However, recent announcements from DoCoMo, Orange and Disney indicate the industry is still stuck in the content delivery phase.

DoCoMo and Orange announced they’re working jointly with Sharp to procure a handset with 3D screen and 3D camera, but there was little discussion of any new 3D services. Interesting, however, to see this first-of-its-kind procurement partnership between a Japanese and European network operator.

Disney, meanwhile, is introducing an own-branded handset with a 3D screen via its MVNO venture in Japan. The DM010SH runs Android and includes access to Disney’s 3D pop-up storybooks.

As we concluded in recent working sessions on MEX Pathway #4, the potential for 3D to improve the mobile user experience is reliant on a 3 stage process. Stage 1 is seeding the market with the necessary screen technology – we’re seeing the first moves in this area with announcements like these from DoCoMo, Sharp, Orange and Disney. Stage 2 is the realisation that 3D output (i.e. displays) is ineffective without 3D input mechanisms (e.g. gestural recognition or pressure sensing). Stage 3 is tapping into the innovation of 3rd party developers to create wholly new 3D services combining both of these technologies.

There’s still a long road to travel, but we’ll be looking forward to returning to this Pathway at a future MEX event.