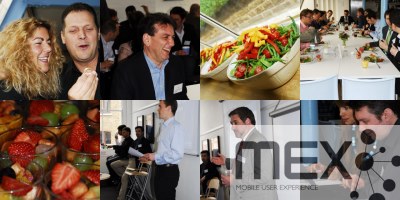 The PMN Mobile User Experience conference re-started on day two with the same high levels of energy and enthusiasm. The opening session saw Antti Ohrling, co-founder of advertising-funded MVNO Blyk, responding to the MEX manifesto statement on the unique requirements of mobile advertising.

Ohrling focused on debunking the popular ‘myths’ around this topic. Among these was the notion that advertising would be driven by content rather than communications. Blyk is basing its business model on providing free voice and text to 16 – 24 years olds so it can send them opt-in advertising messages.

He also stated that push-based advertising will not annoy customers if it is correctly targeted. In fact, Blyk’s research in the UK market (where it will launch this summer) indicates that customers perceive value in receiving push messages if they provide unique offers. Ohrling, who also chairs a global advertising agency, explained that push advertising can be a way of enabling customers to differentiate themselves from their peers by giving them access to information and events unavailable through other channels.

With this stark reminder, two of the breakout teams were sent off the take a pessimistic view and come up with all the reasons they could think of for why mobile advertising would not reach this level. Another two teams were tasked with taking an optimistic view and the remaining three had to get to grips with the reality of which services would be most appropriate for an advertising-funded business model.

When the teams returned from their breakouts, one of the most interesting suggestions which emerged from the discussion was a ‘ringback advertisement’. In return for free calls, customers would have to listen to an advertisement before they were connected to the other party. It’s an idea that goes against our original manifesto statement, where we highlighted the danger of advertisements which interupt a customer’s ‘mission’, but it was received with interest by many in the room.

The UI designers at the conference also recognised the challenge they faced with the visual presentation of advertising messages. The linear nature of mobile interactions, where the device is typically capable of only one action at a time, means that most advertisements will interupt the flow of a user’s process. It will require considerable UI expertise to do this in a way which doesn’t irritate the customer.

The next session on the agenda opened with a presentation from Mike Wehrs, Vice President of Product Management and Evangelism at AOL and Tegic Communications (a last minute replacement for an absent colleague, Bill Schwebel). Wehrs explored the topic of the walled garden, starting with AOL’s experience as a web service provider and how it transitioned from a model of premium subscriptions to a closed service and has now embraced a fully open model where it acts as a gateway to the web.

Wehrs was joined on the panel by Omar Bakhshi of media consultancy iBurbia, Chris Goswami of Openwave and James Pearce of dotMobi.

There was broad consensus on the manifesto statement from the outset: the walled garden was coming down and the industry’s role was now to provide the broadest platform for third party innovation.

The debate was wide ranging, exploring the myriad challenges of facilitating an environment where developers could offer numerous applications and be rewarded for their innovation. Questions were raised over the suitability of the browser as a universal interface for both the handset idle screen and a seamless link to web services. The issue of service discovery was also seen as key, with the conference generally subscribing to the view that the operator’s role was evolving into one where it should help users discover the broadest range of services and provide a platform which ensured reliable delivery and billing.

The developers in the room highlighted the fact that many of the challenges they faced in bringing services to market were usually a result of political and commercial anomalies – such as one manufacturer favouring a particular platform or having to pursue deals with numerous different operators – rather than technological limitations.

Paul Kompfner, Head of Development at ERTICO, introduced the next manifesto statement. The general theme for the session was the generational change which will be caused when mobile devices start talking to machines as well as other humans. Kompfner illustrated this with a presentation about the work his organisation is doing to develop a universal platform for connecting mobile devices to in-vehicle systems and using wireless networks to connect cars to the physical environment.

Inspired by Kompfner’s presentation, the breakout teams were sent off with three different tasks. Two of the groups had to explore the possibilities for connecting mobile devices with the car. Two more groups were asked to look at payment, ticketing and identity applictions. The remaining three groups were given free reign to think up the most creative ideas they could for interfacing with the physical environment through their handsets. All of the teams were told to pay close attention to the user experience considerations of all these scenarios. 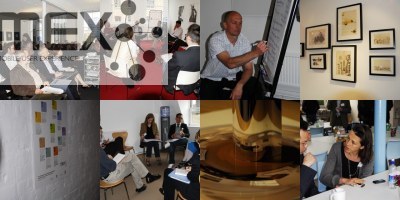 The groups returned with diverse opinions. However, a consistent theme emerged: the novelty of many of these services would create cultural and behavioural barriers to their acceptance. Using a mobile device as an identity token, door key or universal wallet was cited as an example where customers would be unlikely to adopt quickly because of concerns over security. Even though most people in the room were aware that the digital security of a mobile device would be far superior to the physical properties of keys and and cash, they would still hesitate to become an active user.

Reliability was another concern. What would happen if the device failed or the batteries ran out?

The user experience challenges were recognised as being very different from the typical considerations of on-screen menus and icons. There was a feeling that using mobile devices for physical interactions would require much more creativity in visual, audible and touch prompts to take account of the environment in which the handset would be operating. For instance, rather than displaying an on-screen confirmation or audible beep when going through a busy ticket barrier, the device could vibrate, perhaps pulsing a certain number of times to indicate how much had been charged.

Stuart John, who recently left his role as Product Manager at Skype to join user experience consultancy Ocean Observations, addressed the manifesto statement on service pricing in the penultimate session of the conference. The presentation was focused on the mis-alignment of consumer pricing expectations and the way in which mobile services were billed.

John highlighted how the market is changing. In developed markets at least, the days of growth in traditional telecoms are over. ARPU across Western Europe is predicted to grow by just 0.3 percent per year between 2006 and 2010. Most comes from voice and messaging, but this is being eroded by intense competition from other mobile operators and new players such as Skype and fixed-mobile convergence services.

The breakouts were asked to look at the reality of fighting for wallet share in a market where traditional growth has stagnated. How can the mobile industry attract customers to spend money from other areas of their budget on telecom services? The groups were sent off to examine which areas of non-mobile spending could be re-directed into the industry’s coffers and how they could be priced to make them attractive.

Flat-rate tariffs were generally seen to be a big part of the solution. Uncertaintity about the cost of services was preventing a lot of customers from using mobile more extensively. A question was raised as to why the industry simply couldn’t provide an on-screen display to show exactly how much each service cost while it was being used. The technology to do so already exists, but the operators in the room agreed this was unlikely to ever happen as the fear of a spending slowdown was too great.

Day 2 of MEX concluded with a fascinating presentation from Mark Rolston of Frog Design. Frog is one of the most respected interface designers in the industry and Rolston was asked to respond to the manifesto statement on delivering personalisation capabilities into the hands of the user.

Rolston explored the difference between user-driven personalisation and company-driven customisation. While there was value in both approaches, too many companies in the mobile business try to generate brand values around the concept of ‘We are we’ rather than ‘We are you’. Companies like Dell have created highly valued and customer-friendly brands by adopting the ‘We are you’ concept, enabling customers to take part in the product creation process by defining exactly what they want from their PC.

Rolston was joined on the panel by Carlos Oliviera of MobiComp, Herbert Vanhove of Qualcomm and Graham Bradley of SurfKitchen. Vanhove was keen to stress that Qualcomm was already adopting the principles of the manifesto statement, embedding personalisation capabilities from the chipset level upwards.

The main barrier to widespread personalisation capabilities seemed to be a reluctance at operator-level to relinquish control of key user experience elements or invest in easy-to-use tools which would allow customers to define their own mobile environments.

The objective of the MEX community is to help the mobile industry understand customers and translate that knowledge into better mobile experiences. After two days of debate, creative thinking and networking, I believe we have made significant progress towards that goals.

My thanks to everyone who attended for participating with such enthusiasm and contributing their insights. Thanks also to our sponsors TAT and Tegic.

We’ll shortly be making a full package of MEX speaker presentations, research notes and reports from our in-house analysts and facilitators available to purchase. If you’d like to be notified when this is available, please send me an email with your contact details.