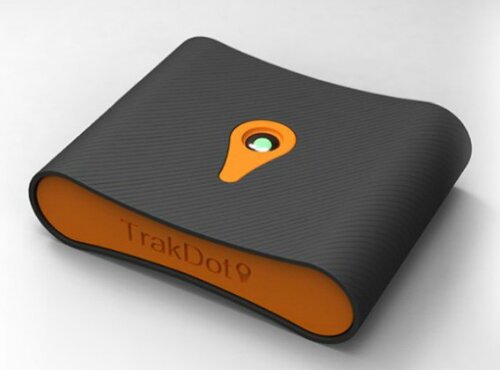 Users’ relationship with places and objects varies according to several factors: distance, purpose and timescale to name but a few. Trakdot’s luggage tracking device is an example of how to adapt technology to those changing needs.

It promises to solve two problems: reassuring users their luggage has arrived at the same airport when they step off the plane and notifying them when it is about to come on the baggage carousel. Trakdot achieves this by employing some comparatively old techniques and combining them with new thinking about experience design.

There’s a motion sensor on-board to detect when the plane decelerates upon landing. This activates a basic GSM cell-ID query, to verify the name of the airport it has landed at by identifying the base station. The device then sends a notification to the user’s smartphone, so as soon as they switch on after exiting the plane, they know if their luggage has arrived too.

It then uses Bluetooth to notify the user at much closer proximity when their baggage is coming through the carousel.

I was impressed by how Trakdot has combined a variety of technologies to achieve the best UX at varying degrees of proximity for the user.

Locate was one of the user modes in focus at MEX in March 2014, part of a collaboration with the UK government’s Technology Strategy Board, which is running a major funding competition to accelerate innovation in this area. It will also feature at the next MEX event, where we plan a series of talks and creative sessions to explore proximity, user relationships and the notion of place.