Made In Brunel has evolved to be more than just an annual exhibition of student design projects, expanding to become a multi-day festival of ideas and networking on London’s Southbank. I visited as part of our ongoing collaboration with Brunel University and was rewarded by seeing a diverse set of project work and thought provoking talks in a well planned event space.

I bumped into Jo Barnard, the student appointed as Managing Director for Made In Brunel 2014, who explained how this year’s team focused on conveying the brand’s meaning as something beyond the event itself. This was reflected in the new tag line ‘Only the beginning’, but also in the refreshingly simplified visual style of the marketing materials and event space. In addition, it saw their activities extending to a well attended ‘school’s day’ where young students contemplating a design path at university could work on challenges alongside Brunel’s graduating class.

A few highlights from the exhibits: 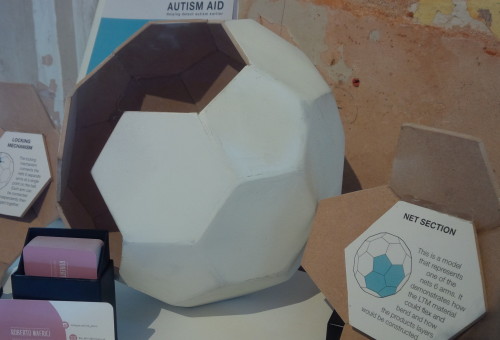 Roberto Mafrici’s project started with technology – a new material which changed colour in response to pressure – but quickly evolved into something driven by user research. Mafrici began to explore how autism is diagnosed in children. He found there is already a known link with interest in spiral patterns, which inspired him to investigate how signs of autism might be visible in play.

The result was an extensive report on user behaviour, which subsequently guided the development of his prototype, balancing the requirement to use a specific material. The analogy with the technology industry was not lost on me: I talk to companies every day, large and small, who are struggling to see why design process led by specific components does not result in products suited to user needs.

Mafrici had also considered the various contexts in which his system might be used, from background monitoring of the light patterns children accessed most frequently, to more structured tests where a practitioner might ask the child to go through specific exercises with the device.

See Diagnostic Ball in the Made In Brunel portfolio. 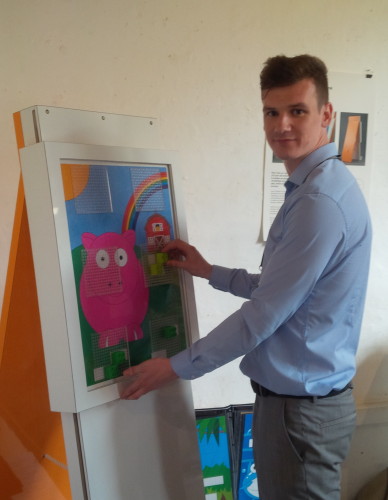 Luke King had also focused his major project on helping children, in this case those with weakness in the shoulders. He worked with Guy’s and St Thomas’ Hospital in London, which has a unit specialising in this condition – at its most acute, children lack the strength to even raise their arms above their head. 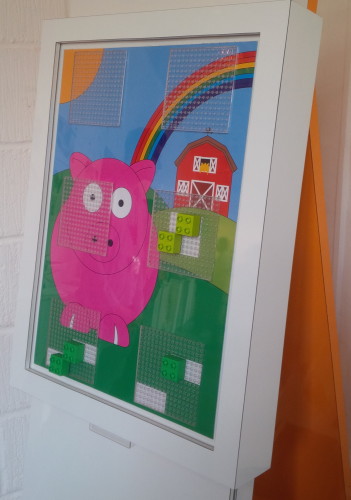 King spent time talking to the practitioners and observing the patients before divising an ingenious solution, applying simple materials to a complex problem. Children are asked to attach standard Lego blocks to a transparent plastic grid. Beneath the plastic are cartoon posters, drawn by King himself, with carefully placed target zones at different heights to test how well the children can lift their arms. For the children, it seems like a game, completing the cartoon pictures with the Lego blocks, but for the medical practitioners, it provides valuable information on the progress of their treatment.

It looks like a more substantial version of the ubiquitous flipcharts found in meeting rooms the world over. However, it hides an engineered mechanism which allows the height of the grid to be adjusted to suit the size of each child.

King was returning to the hospital after Made In Brunel to further evolve the design, with a strong possibility it would progress from prototype to being deployed for ongoing use with patients. A great example of how established organisations can benefit from the fresh ideas of design students.

See Play Time in the Made In Brunel portfolio. 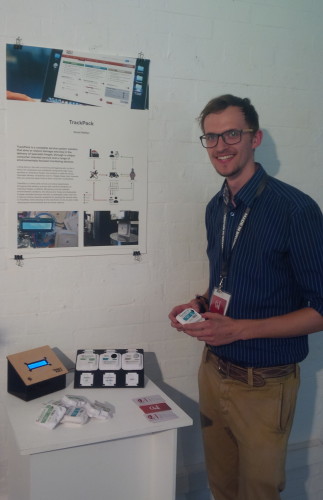 Dave Walker’s TrackPack was another standout, representing a complete solution for monitoring the transport conditions of packages. It intrigued me for two reasons: firstly, it applies technology to return control of the shipment process to users and secondly, because Walker had designed the end-to-end experience. 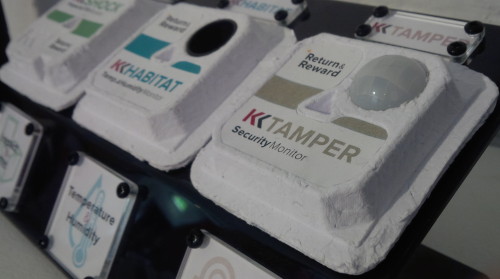 Each TrackPack contains a choice of sensors for monitoring things like humidity or impacts. These low cost sensors are housed in a recycled cardboard casing and activated by simply pulling out a sticker tab. This starts the tracking sensor and the sticker portion is then placed on the outside of the package so everyone who handles it knows it is being monitored. 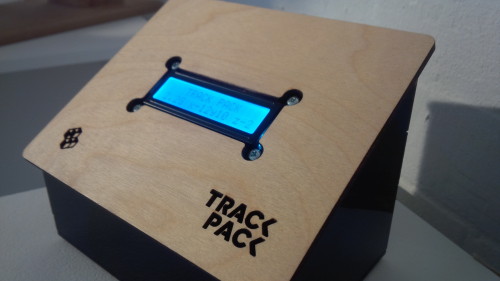 The user and the shipping company see live reports from the sensors throughout the journey, including configuring alerts if certain parameters are exceeded. It struck me this would focus handlers on ensuring safe passage for the package and create a trail of responsibility if something went wrong.

Walker had even considered how the low cost sensors could be re-used in interesting ways or returned for recycling, emphasising the attention to detail which saw him imagining everything from the brand identity to the hardware design of the sensors themselves. 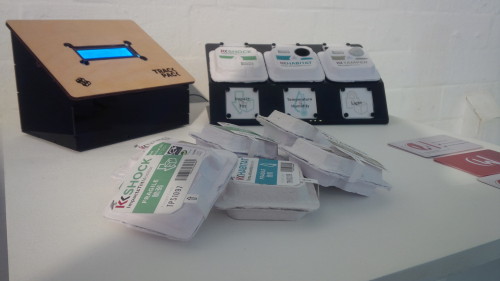 See TrackPack in the Made In Brunel portfolio.

I was also struck by Jara Alvarez Masso‘s playful experiment, using a combination of sensors to create a digital interface which prioritised gestural and audible dimensions. The housing of piano black lacquer and pale wood contained motion sensors which controlled musical notes, indicated on a simple set of LEDs, allowing users to create sounds according to the height and position of their hands. 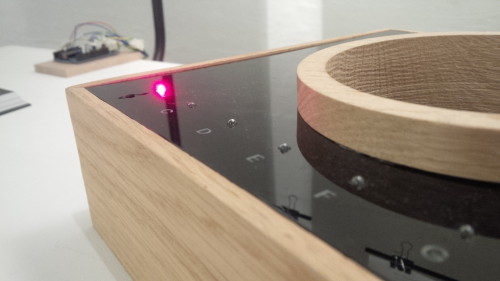 See Soundwave in the Made In Brunel portfolio.

The overall quality of the projects on show would have surprised me, had I not already had the pleasure of working with a team of Brunel designers at MEX. As it was, I was already familiar with the quality of thinking the course at Brunel seems to instil. This was evident both in the long-term projects they were showing at Made In Brunel and in the far more rapid challenge of thinking on their feet at MEX.

It was interesting to discuss the ongoing direction of the course with some of their lecturers, who see an evolving balance of the traditional practitioner skills for which Brunel is already known, strategic thinking aligned with current trends in service design and, longer term, greater commercial awareness to equip a new generation of design entrepreneurs.

In particular, we discussed organising a tour for investors from the MEX community to visit Made In Brunel 2015 to scout projects suitable for seed funding or mentor students who could achieve commercial success for their ideas with some additional guidance. Contact me if you’re interested.

Alongside the exhibits, the students also organise a series of events, including a Pecha Kucha evening curated by Rory Southworth, one of the Brunel designers who participated at MEX. Southworth created a balanced programme, with speakers offering a broad spectrum of views on design. Refreshingly, each seemed to have a rather different take, but the unifying factor was the quality of their presentation and enthusiasm for their subject matter.

There were several MEX alumni on the agenda, including Giles Colborne of cx partners, Jason Mesut of Plan and Andrew Muir Wood, accompanied by two members of Shellsuit Zombie – Alex Vissaridis and Becki Hemming. They closed a memorable evening with a discussion of how fear holds back creativity which had many of the students in the audience nodding in agreement to the words of wisdom offered by the mask wearing, hooded zombies and their beautifully illustrated slides of cats. Quite the most memorable Pecha Kucha I’ve attended.