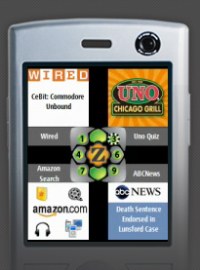 Reuters has this article on ZenZui, a company spun out off Microsoft’s research labs to commercialise a new interface tool for mobile devices. ZenZui’s Zoomspace enables users to customise the interface of their handset with a pattern of individual tiles linked directly to content and services. When browsing through the tiles, the user sees a thumbnail view of the service and simply clicks to zoom into the full content.

N.B. This subject will be a key topic of discussion at the MEX conference in London on 2nd – 3rd May 2007 – register to attend on-line at www.pmn.co.uk/mex/.

ZenZui’s technology keeps the tiles constantly updated in the background, presumably pre-caching some of the content on the device and using powerful server-side processing to grab thumbnails of each service. A company called Snap has pioneered a similar concept for the desktop web, providing instant thumbnail views of the hyperlink destinations when the user hovers the mouse over the relevant piece of text.

ZenZui is still in the early stages of commercial rollout. It has scored USD 12m in a recent funding round and is now looking for operator partners to deploy the service. The business model is based around advertising, promising zero cost to the operator and zero cost to the consumer. ZenZui is recruiting marketeers to sell advertising space relating to each ’tile’, ensuring users receive relevant promotions and advertisers get good leads.

If you want to see the concept for yourself, check out the preview video on their web-site.

I’m impressed with ZenZui on a visual level, but I think their business model will be much less simple than they anticipate. Operators tend to be cautious by nature and are unlikely to deploy a ZenZui as their sole interface solution. This means they are also unlikely to buy into ZenZui handling the advertising sales and will instead want the company to work with their existing advertising partners – e.g. Google, Yahoo, Admob, etc… – which will limit ZenZui’s remit to that of a clever technology supplier.

Of course, this may change if ZenZui can recruit a sufficient number of developers to offer interesting applications for the platform. It plans to release an SDK in the summer and, if it can demonstrate some really compelling services, operators may be convinced that its interface approach truly is a revolutionary way to drive data usage. However, developers want concrete user numbers before they commit significant resources to a platform, so without a major operator partner, they are likely to suffer from the chicken and egg mentality which is holding back growth in mobile services all over the world.

ZenZui’s approach, where users navigate objects themselves, as opposed to lists and icons describining objects, is part of a growing trend in mobile interface design. It is being driven by an an increase in processing power and storage space, enabling users to create and store much richer media on their handsets. It is now not only desireable but technologically feasible to make media objects part of the interface rather than a layer beneath it. 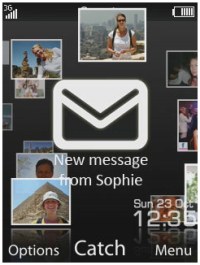 TAT, the Swedish interface platform provider, recently employed a similar approach for managing images on a mobile device. Their PhotoRiver solution displays the user’s image gallery as a series of floating squares scrolling across the UI, which can be ‘zoomed’ to get the full picture with a single click.

In a recent newsletter, TAT described what this approach signifies: “Traditionally the UI has had a subordinate role compared to the mobile applications, i.e. the browser, messenger and media player. This is about to change. The UI is gradually moving from something nice and beautiful, to a strategic differentiator in designing and utilizing all of the functions in the device.”

You can see a video demonstration in TAT’s concept lab (look for the PhotoRiver UI). TAT is also a sponsor of our MEX conference on 2nd – 3rd May 2007, where Hampus Jakobsson, co-founder and Vice President of Marketing, will speak on a panel about personalising the mobile experience at all levels.

Removing the layers between the user and the objects or tasks they want to complete on their mobile device is a logical step. Why should the interface be a passive, structured layer funelling the user through a process flow? In many instances this is counter-intuitive, something Apple has realised with its iPhone product.

Setting aside the pre-launch hype created by the Apple ‘tifosi’, the iPhone is interesting because it emerged from a design team which had no legacy in the mobile phone business – they were able to sit back, look at what today’s mobile users want and design a solution from scratch. The result is an interface totally different to the traditional two button softkey approached employed by most of the major manufacturers.

The nascent mobile search engine sector is quickly discovering some important trends in the way user’s interact with content in the mobile environment. When they search, they want to be taken to things which match their request rather than a long, Google-style list describing a series of pages which may or may not contain what they’re looking for. If someone is searching for a soccer star, they respond much better to a results page with photos, a table of their team’s latest scores and video clips of their most recent goals than a series of text links to associated web pages.

These behaviour patterns will have an effect on mobile UI requirements. The traditional mentality of application silos, itself a legacy of PC-style computing, is inappropriate for users who consume a lot of content in the mobile environment. Why should a user who wants to send a photo of their favourite celebrity need to open a web browser, access a search engine, save the image into a gallery application and open their messaging client to achieve their objective. This would be tedious enough with a mouse and desktop screen, let alone the limited form factor of a mobile device.

If the industry wants to encourage data consumption, surely it makes more sense for the mobile UI to be built around a user’s personal store of digital content rather than a series of lists, icons and applications? Companies like ZenZui, TAT and Apple are moving in this direction and I think these are positive steps. However, there is still some way to go.

I suspect the ideal solution would be an interface which combines easy access to content objects, intelligent association techniques, search and action history. For instance, rather than just being able to scroll back through their call history from the idle screen, users would also be able to navigate through thumbnail images of the web-sites and photos they’d viewed and messages they’d sent to contacts. The software could also build links between those objects, so a photo would be linked to the contact details of everyone that image had been sent to.

There’s a whole generation of younger users emerging for whom virtual spaces and digital content are a natural part of their communications language. In many ways, content is part of their vocabulary – they are as likely to express themselves with a photo as they are a spoken or written sentence. Their thought processes don’t delineate between applications and objects or even between the physical and the virtual world. To capture the imagination of these users, mobile UIs must be based on the same principle of flexibility.

Our MEX conference in London on 2nd – 3rd May 2007 will take an in-depth look at this topic. In particular, there will be a panel session on making any mobile service accessible from the idle screen and simplifying search and discovery. This session starts with a keynote from Matthew Menz, head of interaction design at Motorola, and also includes Markus Grupp, Handset User Experience Design Manager at Canadian operator Telus, Dave Evans, CTO, SurfKitchen and Pim van Meurs, Director of Innovation, AOL/Tegic Communications.

Register to attend MEX at www.pmn.co.uk/mex/register.shtml.