The Apple Watch occupied about 20 times more floorspace than the new MacBook when I visited the company’s Regent Street store in April 2015. The Watch’s display units stretch the full width of the store and are the first things a customer sees upon entering. The MacBook, in contrast, is tucked away at the back on a single table with about 8 demonstration units. Is this a reflection of the superior margins commanded by the Watch or rather an implicit acknowledgement this new product category requires more education of the customer base?

It was the middle of a Tuesday afternoon and the Watch displays were well attended by potential customers, but could not be described as busy. I was able to walk up and start using one immediately. I suspect this will change, of course, once it is possible to actually buy an Apple Watch in the store. At present customers may use the demonstration units, but purchases may only be made online and the waiting list is already about two months long.

It is a refined and elegant product when seen up close. The quality of the materials and the manufacturing process is immediately apparent in the physical curve of the thick glass and the crisp resolution of the digital display. Its superiority to existing smartwatches is obvious in that first glance.

It is notable that even this first generation screen panel may be of sufficiently high resolution to last several years without users feeling they have been left behind by subsequent improvements in pixel density. It is just ahead of that crucial threshold where individual pixels are barely discernible – a noticeable difference from the comparatively pixellated display of the first generation Moto 360 and other Android Wear products. That thought may reassure those hesitating to spend the premium price tag because of concerns it is going to be out-of-date within a year or so. If Apple maintains its reputation for ongoing software upgrades and support, the first generation Watches may last a few years rather than the more fleeting lifespan of our increasingly disposable laptops and smartphones.

My visit to the Apple Store was prompted as much by curiosity about how the Watch would be merchandised as by the product itself. A few months ago I wrote of the disappointingly poor presentation of the Moto 360 at an upmarket London department store. Apple, with its ability to curate the entire retail experience through its extensive network of stores, has a major advantage in this regard. 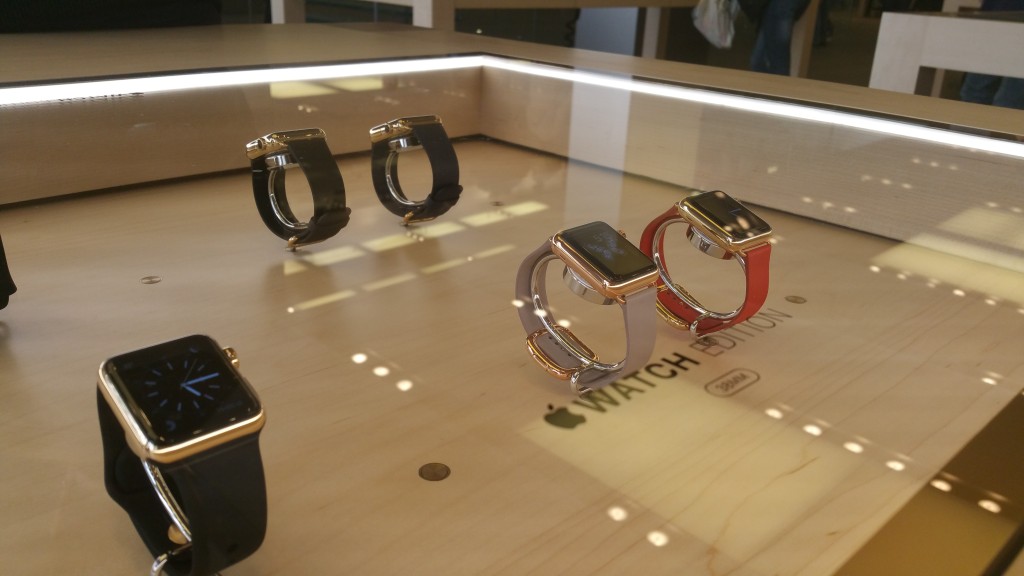 Apple has used two different types of retail station in London. For those who just wish to look, there are glass-topped display tables, where an extensive range, from the entry level Sport with its colourful plastic bands to the gold Edition, are laid out in rows. The overall effect allows for at-a-glance comparison between the two sizes and numerous different band options, giving the impression this is something which can be personalised to each user’s taste.

In addition, there are numerous individual Watches available for users to try for themselves, each one paired to a special digital companion display (likely an iPad embedded in a plastic housing). This is where Apple’s retail experience really shines through. The Watch and the companion display are in perfect synchronisation, so that as users navigate the features of the Watch, the display changes to provide information on that particular function.

It is a great way to help users discover the new interaction patterns introduced by the Watch. It also reduces the need for a significant increase in staffing levels to support the Watch rollout, something I’d speculated would be necessary given the challenges of demonstrating a personal product like a watch in the retail environment. In the 30 minutes or so I spent with the Watch, the only noticeable member of staff was the security guard who paced back and forth between the Watch display units and the store entrance. 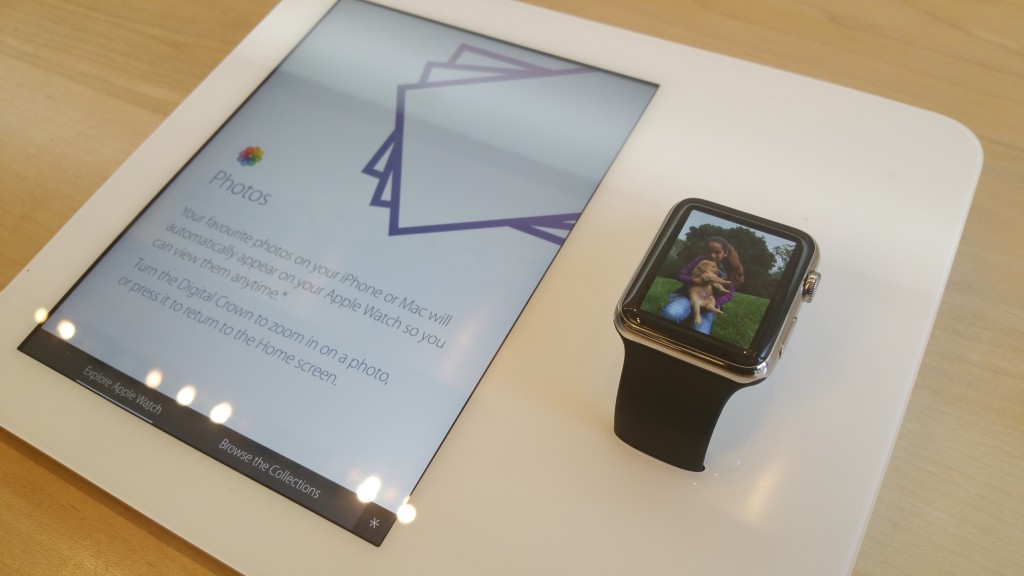 Another consideration is the degree to which this ability to create a synchronous digital experience between the Watch and the iPad will flow through into the design of third party apps. It is clearly possible for actions on the Watch to influence the iPad in real time, something Apple has used to great effect in these retail demo units. I suspect it won’t be long before developers are also able to take advantage of this mode to create overall digital experiences distributed between the Watch and secondary displays in a way that goes beyond today’s basic, asynchronous modes.

I’d read several reports describing the Watch’s interaction model as counter-intuitive, even for experienced iOS users, but I found it clear and surprisingly mature for a first generation product. It benefits from Apple’s trademark understanding of how to communicate affordances: the ‘bounce’ which characterised the end of list interaction in iOS is here too, albeit in an evolved form which gives a little extra zoom and then a snap back when the user reaches the upper limit of the digital crown’s ability to zoom in.

The decision to assign a dedicated button to a list of favourite contacts also makes sense in practice, even after I’d found myself questioning its place in the UI model from a theoretical standpoint. It acknowledges the importance of being able to employ the Watch as a rapid, in-motion communications tool, by ensuring this feature exists in a UI channel of its own and always accessible in the same place. I suspect this will be appreciated by users as they start to employ the Watch while walking or on public transport.

Another hallmark of Apple’s products has always been the way they invite casual tactility. The MacBook had the texture of its aluminium, which you can often observe users caressing absent mindedly. Or the MagSafe connector, which some toy with, snapping it on and off, unaware they are even doing it. On the iPhone, it is usually the concave home button, which users stroke with their thumb or use to spin the device around, pivoting between thumb and forefinger.

It is the digital crown which will channel this casual tactility on the Watch. It will be twirled in idle moments, the focus of the little bursts of nervous energy we all have from time-to-time. Apple seems to have anticipated this in both the physical design of the crown, with its little grooves for extra grip, and the interaction model, which permits those kind of sub-conscious and purposeless moments of fiddling without causing any significant or irrevocable interactions.

I was disappointed, however, that the novel experience of Apple’s Taptic messaging was impossible to demo. With the Watch displayed on a circular pedestal, the vibrations which would normally be transmitted to the wrist couldn’t be felt. This is potentially one of the most compelling aspects of the Apple Watch experience and certainly the most distinctive versus other products.

Unfortunately I fear Apple has come up against the limits of security here: it simply isn’t viable to allow customers to freely strap on watches without supervision on the shop floor. This might be helped by the next evolution of the retail experience, when Apple rolls out whatever new format it is planning and starts actually selling the Watch in store. There’s real potential here to use Apple’s unique retail presence to educate customers about the potential for haptics.

I left with a lasting impression: for all the hype and build up, Apple has remained true to the principal which has been the foundation of its success: the Watch feels human, in its proportions, appearance, interaction model and features. This is what so many technology companies fail to grasp, especially when entering new categories on a wave of techie euphoria. Apple has eschewed technology for technology’s sake and, through its patience, arrived at something which stands a chance of finding a meaningful place in users’ lives.