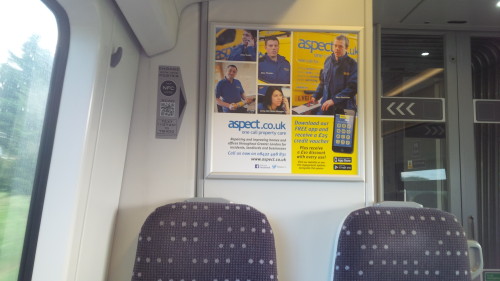 What’s wrong in the photo above?

To provide some context, it is a scene I encountered on a train journey in the UK, where there was an advertisement positioned on the wall facing my seat, accompanied by an ‘action point’ with an NFC tag, QR code and instructions on how to send an SMS to a shortcode. 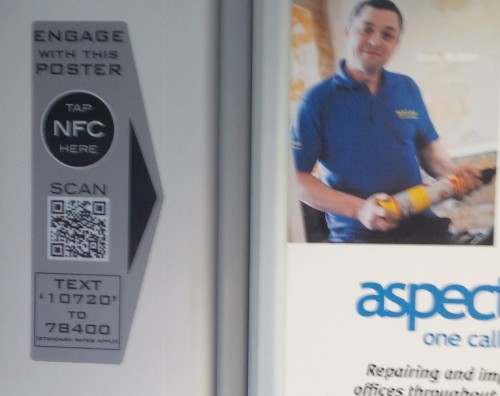 The action point invites users to ‘Engage With This Poster’, but I’d guess it has led to no ‘engagements’ whatsoever for a few simple reasons: 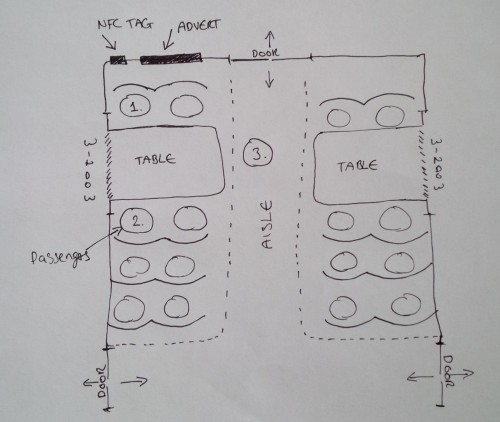 The diagram above is a plan view of the train carriage, showing the location of the passengers, furniture and advertisement. Consider the user experience for the 3 numbered passengers, if they wanted to ‘engage’ with the advertisement.

Passenger 1, seated in front of the poster, cannot see it to read the QR code or SMS details. The only way they could touch the NFC tag would to reach around at an incredibly awkward angle, twisting in their seat. The situation would be similar for the passenger sitting next to them.

Passenger 2, seated opposite the poster, can see it, but it is too far away to read the SMS details. They might try to scan the QR code, but if someone is seated opposite them, they will be sitting there pointing a camera in their face. As it happens, the QR code was actually so small that it could only be scanned by leaning in until your camera was about a foot away from the advertisement. What about NFC? Well, if I’d have wanted to touch my phone to the NFC tag, I’d have had to lean over Passenger 1 to the degree that my armpit would have been almost in their face to touch my phone to the NFC point.

Passenger 3, standing in the aisle, would face similar challenges to Passenger 2. With the ‘action point’ located in the far corner of the train, they cannot get close enough to see it and it would be impolite and weird to lean in close to enough to touch or scan it.

Once my fellow passengers had left the seats opposite, right at the end of the train journey, I took the opportunity to lean over and test the NFC tag. It didn’t work, presumably because no one had bothered to update it with the correct link.

The QR code did work at close range, as did the SMS shortcode, but both used a web link which seemed unrelated to the advertisement and I suspect would have put off many casual users uncertain of where it was going to lead them. 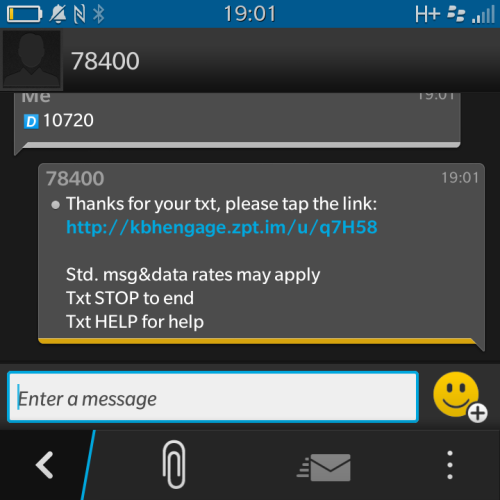 I wonder how much was spent to install these new ‘action points’ and how expenditure was justified with predictions of increased NFC penetration and demonstrations of QR codes in action. I wonder how many of the advertisers have been sold on the prospect of mobile ‘calls to action’?

The concept of using a mobile device to engage with the physical environment has strong potential and is something we’ve been investigating at MEX for some time, through our events and research. However, it is yet to capture public interest because – like this advertisement example – most implementations have been beset with basic usability problems.

Here are just a few of the design principles which have emerged from previous MEX sessions which could have improved the experience:

How could this situation be improved? One very simple step would be to do what mobile does best and bring the advertisement to the user, rather than expecting the user to go to the advertisement. Why not simply position to the ‘action point’ with its NFC tag and QR code on the table top, where it is within easy reach of the passengers, instead of next to the poster, where no one can use it?

In addition to our explorations of user experience at the MEX events and in our research publications, MEX also works directly with companies to troubleshoot these kind of barriers to customer engagement. In 2 days, we can identify where a company has a customer experience issue, help management understand its implications and agree a plan to solve it – why not get in touch and challenge us to do it for your company?