This article by Marek Pawlowski, founder of MEX, describes a low tech, experimental workshop technique used at a recent MEX Conference to get people thinking about the fundamentals of user experience.

A few months ago here at MEX we started to wonder what would happen if we brought together 100 people at the cutting edge of mobile technology and set them a user experience challenge in its most basic, raw and practical form. This is the story of what happened… 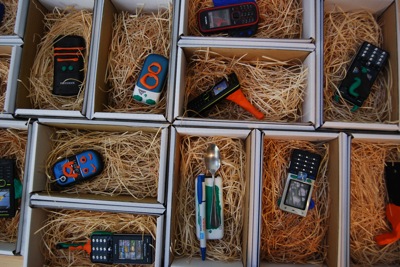 We’ve always believed user experience goes much deeper than the visual interface. This has been a consistent message, a mantra, since we launched the MEX initiative in 2004. All our research work and events focus on broadening the industry’s understanding of the myriad factors which determine a customer’s experience with a particular product.

With this in mind, we set out to design an exercise for the opening session of the May 2010 MEX Conference.

There were two objectives: firstly, to help participants understand the building blocks of customer experience in a tactile, practical way. Secondly, to establish a mandate for creativity from the very first session of the event – something we hoped would pay dividends later on when attendees worked together on other intellectual and practical challenges.

Upon taking their seats for the first session, every delegate found a sealed box in front of them. 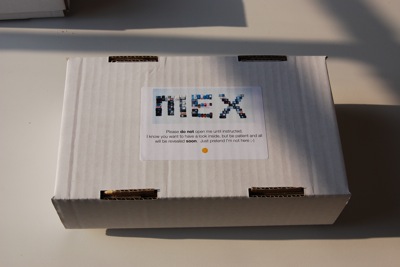 Each box contained a different phone model and some packets of Sugru modeling clay. 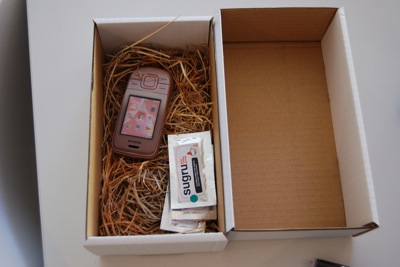 The challenge was simple. Participants had 20 minutes to modify their phone model, using the Sugru, to make it either easier to use or more attractive.

Sugru is a fascinating substance. It feels like modeling clay, but adheres strongly to almost any surface. It cures in the air and, once set, remains flexible, yet is waterproof.

We were lucky enough to have Jane ni Dhulchaointigh, the inventor of Sugru, volunteer to come along to MEX and inspire delegates with the story of Sugru’s creation and some examples of how it is already being used.

Jane pointed to the re-emerging trend among customers to ‘hack’ their own user experience improvements onto products. Renewed interest in self-building, growing awareness of sustainability and a desire to express ownership by modifying mass produced, impersonal devices is fueling a generation of physical hackers. There’s a wonderful gallery on the Sugru site showing the diverse ways in which the substance is being used.

We had no idea how the participants would react to the exercise – we had given them no warning this would be their first task at the conference – but the scene which unfolded at MEX was fascinating. 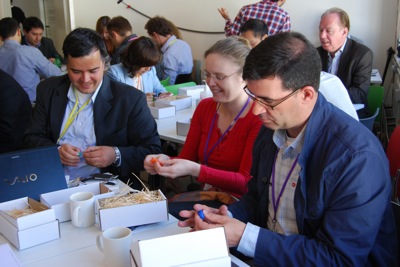 There was an immediate and unexpected move to share, compare and contrast. The participants were seated around shared tables and, upon opening their boxes, the ice was quickly broken as participants from very different parts of the world started to exchange colours of Sugru and explore the wide range of different phones we’d provided (everything from high-end touchscreen slates to low-cost clamshells). 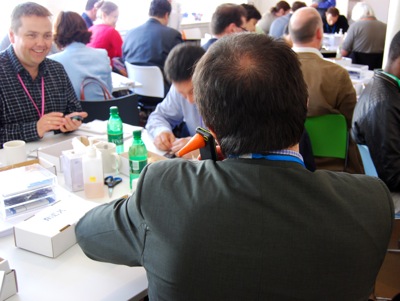 We also quickly learned that scissors (to open the Sugru packets) and hand wipes (Sugru is not sticky, but can leave a slight residue on your skin) were useful additions – luckily we had all these available.

This represented a strong start for our second objective. MEX is a purpose-driven event – the participants are there to create a collective response to specific issues – so the success of each conference is heavily dependent on how well we can get people from different backgrounds, countries and job functions working across language and knowledge barriers. The communal spirit in which everyone approached this exercise helped to establish an atmosphere of shared adventure which persisted for the full two days. 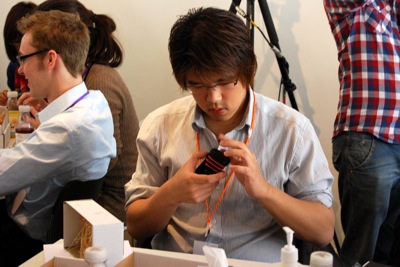 We were less certain about whether such a low-fi approach to modeling the user experience would deliver on our other objective: focusing attention on the range of aspects outside the software UI which influence customer perceptions. Here again, though, our expectations were exceeded.

The models produced in the 20 minutes allocated covered a broad spectrum of user experience enhancements. They seemed to fall into 5 categories:

While the tools were purposely very low tech (and therefore did not exclude or intimidate, as sketching often can), the result was a remarkably comprehensive and tangible examination of the 5 main areas where physical differentiation can impact the user experience. Do you think there are other aspects which we missed? It’d be great to get your feedback in the blog comments. 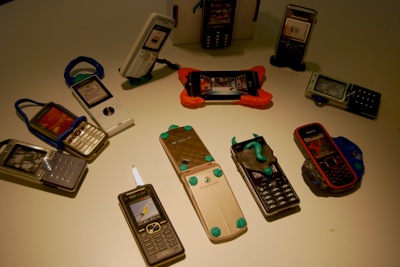 The exercise concluded with every participant putting their model back in the box and handing it to a member of our staff. We then stored the models overnight so the Sugru could cure. As participants left the conference on Day 2, they were re-united with their models to take home, along with a little thank you from the MEX tea.

On balance, we found it to be an effective workshop. There were some very positive comments from the participants and we know a number of them have since gone on to use Sugru again. The more in-depth challenges which participants took on in the main breakout sessions later in the event also resulted in some of our best ever outputs from a MEX Conference, due in no small part to the creative mandate established in this first exercise.

We have since developed the workshop further and used it in our consulting work – the results were again very pleasing.

We’re now working on something equally engaging for the next MEX Conference in December 2010 (registration now open). Suggestions welcome!