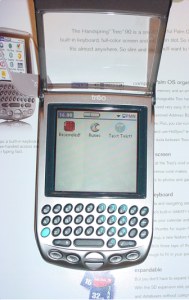 Many years ago I started learning the breakthrough Graffiti system incorporated in the then new Tandy Zoomer. Jeff Hawkins, the brains behind Graffiti the Zoomer, and later, the original PalmPilot and Handspring, pioneered this counter-intuitive way of requiring humans to input unambiguous characters to accommodate the low-powered, low drain processors of the day. But as Palm OS moves away from the ‘gearheads’ and early adopters into the general market, there’s good reason to suggest that thumboards will spell the end of Graffiti as a common input mode.

Handspring’s Treo 90, clearly aimed at the mass-market, does not include Graffiti. All user input is through the keyboard or touchscreen. For most new users, that’s one less thing to have to learn. Even after better than a decade of practice, I find the error rate for my Graffiti is still uncomfortably high. Although I’ve gained considerable speed with Graffiti and can easily write it without any conscious translation, the backspace motion is still the most repeated stroke on a daily basis. This is the reason that add-on keyboards are one of the best selling handheld accessories. However these add-ons require extra cost, come with fragile connectors, need software drivers or hacks, and take up a traveler’s precious space.

It may be an overused term, but the Treo line is simply sexy. They are well designed and attractive, rivaling even the newest ‘Chiclet’ phones for style. This is not surprising since the Treo line began with communicators. The Treo 90 is the first of the line to be solely an organiser with no on-board wireless or voice technology. However, software for wireless capabilities, e.g., browsing, mail, etc. is included with the package. You’ll need to add an appropriate wireless phone with IR-link or a special cable.

The Treo comes with a thumb board and touch-sensitive colour screen. There is no Graffiti, virtual or otherwise. The good news is that your error rate and speed will very likely be better than all but the most experienced and consistent Graffiti writers on other Palm OS handhelds. 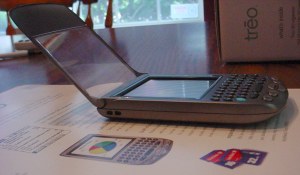 The bad news is that it becomes almost impossible to work in the dark. Finding a Graffiti area by feel works well enough, but typing on an invisible and unlit keyboard doesn’t. Even if you could develop a feel for touch ‘thumbing’ there are no tactile guides to start your thumbs on the home keys. But that is really a minor drawback, since few folks find themselves using their handhelds in completely unlit areas. On the other hand, it is just usable in sunlight, something that rendered the display of its predecessor, the Handspring Visor Prism, virtually invisible – check out a video of the display capabilities (mpg, 892 kb).

We received a prototype model for review testing, which did not have the final display that you will see in production models. We did experience some rainbow banding and the screen required a firmer than normal touch to invoke the digitiser. The vendor has assured us that this will not be reflected on the final models with an improved display. The viewing angle, not terribly important on a one person handheld, was also narrower than other models we’ve seen. If this is important to you, you’ll want to double-check on a release model.

The other minor drawback is the fact that I/O operations other than memory are not supported by the Treo’s SD/MMC slot. That means back up, program storage, e-books and more are fine. GPS, cameras, Bluetooth, Wi-Fi, etc are not. There’s probably a good reason for this lack, but we’re unaware of it and Handspring has not clued us in on the limitation. Update (17/09/2002): Handspring has advised PMN of an upgrade which adds SDIO capabilities to the Treo 90.

The Treo impressed us as compact, colourful, and convenient with a cool brushed finished metallic case. It’s one of the best choices for an organiser without on-board wireless. Expansion options are limited, but it does the basics very well and is easy to use and carry. No Graffiti learning curve means productivity right out of the box for new users or Pocket PC converts.