By Alex Guest and Marek Pawlowski

This essay is the first in a series on the intersection between digital consumption and creativity by Alex Guest and Marek Pawlowski. To follow the forthcoming stream of articles, UI concepts and examples, track #uxintersection on Twitter, bookmark the ‘Intersection‘ category at mobileuserexperience.com or sign-up for the weekly email newsletter. More importantly, this is an invitation for you to get involved in the discussion – we’d love to hear your feedback and ideas for taking this topic forward.

Do you see yourself as a digital creator? Or more of a consumer? Most people will find themselves on a continuum, sometimes creating, now consuming. At times, the consumption of content – be it text, video, static image or audio – will directly prompt creativity. This ‘moment of intersection’, as we defined it, occurs when the consuming of content engenders creativity. It is not the inspiration itself – the instance of ‘aha!’ – but rather the decision to act upon it.

The intersection is the fulcrum about which the individual pivots from consumer to creator, and allows for – and enables – the return to consumption.

In discussion, we noticed how little had been said about the user experience of this intersection. Both ‘Create‘ and ‘Consume‘ have been individual themes at MEX but we wanted to go further and investigate the relationship between them.

The motivations and the states of mind inherent in media consumption have been thoroughly explored, both at MEX and in other fora. At the March 2014 MEX, Alex facilitated a group to investigate user experience design principles to maintain focus during the consuming of digital media. A by-product of that exercise invoked some interesting modes of consumption, where the purpose of consuming was specifically to prepare for creating. While it remained tacit, the existence of the intersection was implicit: whether it leads to inspiration or is informed by it, media consumption will frequently result in various forms of creativity.

Not quite as much is said, outside the worlds of art and of creative enterprises, about the creativity and the range of forms that it takes when ‘ordinary’ individuals turn their minds to producing new works. Nevertheless, it seems relatively well understood. Perhaps where there is a need for greater discussion is at the intersection – the transition zone – between the consumption of content and the subsequent creation of new forms.

While the technological potential of mobile devices such as smartphones, tablets and wearables advances rapidly, their interaction models continue to favour passive consumption at the expense of nurturing users’ creative impulses.

We believe that the creative customer segment has been underserved, giving rise to an opportunity for media owners, device manufacturers, platform providers and software developers to win new users by improving the experience of transitioning between modes of consumption and creativity. In all cases, there is almost certainly sufficient capability to enable more frequent and more deliberate acts of creativity in response to consumed content.

Except in the most trivial cases, the moment of intersection is often poorly handled by app designers. In our view, even the act of sharing media is a form of creativity, however simplistic that might appear. The retweet, therefore, could be considered the most transient and low-input form of creativity that exists in digital media today. If we consider the evolution of retweeting as an action over time, we find this function of Twitter has improved the user experience around an important example of intersection.

A more immersive journey might transport a user from a social media item (such as a pin, post, tweet or status update), via a web link, to a piece of content, which might itself sit within a dedicated app. The viewer, whose attention has been grasped on the social media platform, might wish to respond to the content in a more creative way than simply tapping a retweet ‘button’. For example, a reader of a blog post might wish to comment; a viewer of video might produce a visual response; a music listener might create a playlist. Two points are worth noting:

An example to discuss 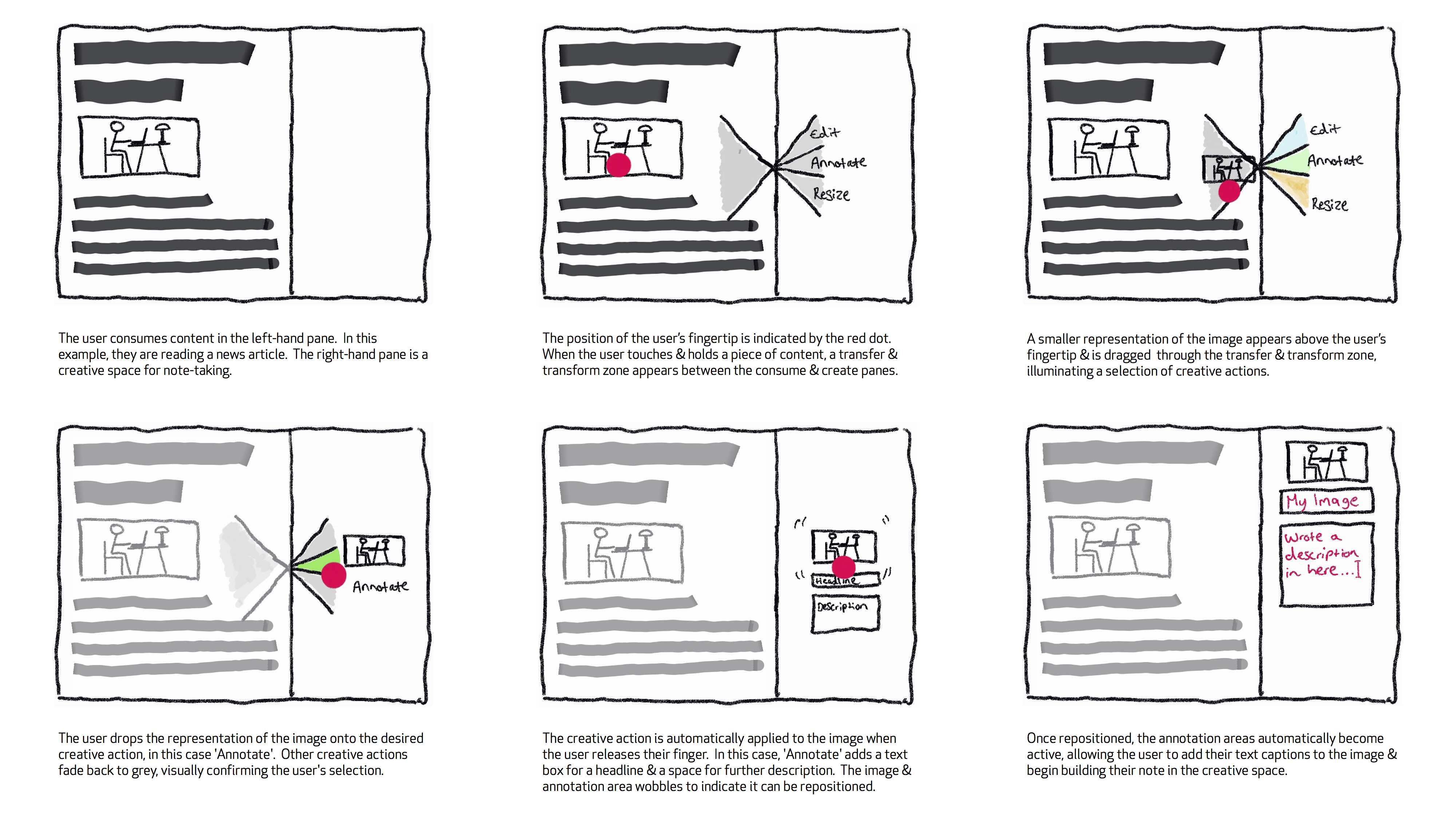 In the interests of prompting a conversation, we developed a rough user interface concept to show how a moment of intersection between consumption and creativity might be enhanced. What do you think of the storyboard above (you can click on it for the full-size version)?

The work was grounded in 3 rules:

Our investigation focuses as much on such moments, wherever they lie on the spectrum of creativity, and from whichever mode of consumption they arise. The degree of intent on either side of the intersection is wide-ranging, and both the profound and the fleeting are valid avenues to informing the intersection. If a retweet lies at one end of the spectrum, then, for example, adapting an image to create a textured surface for a product design, is found towards the other.

The research necessarily discusses behaviours associated with both consumption and creativity, but is primarily tasked with finding design principles for the distinct transition zone between these two states. The ongoing project draws on user observations, comparative research in fields ranging from medicine to art, analysing existing interaction models, original interaction prototyping and material from the MEX archive of user experience insights.

We’d like invite anyone with a view on this aspect user experience of this, whether directly or tangentially, to get involved with feedback by adding your comment on this post. Some questions to get you thinking:

This essay is the first in a series on the intersection between digital consumption and creativity by Alex Guest and Marek Pawlowski. To follow the forthcoming stream of articles, UI concepts and examples, track #uxintersection on Twitter, bookmark the ‘Intersection‘ category at mobileuserexperience.com or sign-up for the weekly email newsletter. More importantly, this is an invitation for you to get involved in the discussion – we’d love to hear your feedback and ideas for taking this topic forward.