It has been interesting to observe how much of the debate about application stores has been about the needs of the industry rather than the needs of the consumer. Amid all the discussion about Apple’s vetting policies, RIM’s minimum pricepoints and the revenue shares offered by each of the major players, who’s really stopping to think about what matters to the end customers, the people who ultimately provide the revenue stream for this industry?

In today’s newsletter I’d like to explore the topic in more depth: reviewing the current user experience of the major stores, questioning whether the industry is on the right path for growth and suggesting some focus areas for making things better.

One of our key Manifesto statements for the MEX Conference next month (19th – 20th May, London) challenges the industry to think differently about this area. MEX Manifesto #1 reads:

“We believe…current app stores are little more than glorified lists. They are time consuming to browse and innovative applications are often buried by poor interface design. The opportunity is for a next generation provider to transcend the traditional scrolling list and establish market leadership through innovative UI design, an open approach to commercial partnerships and advanced customer understanding.”

You can read full details of this Manifesto statement here.

Let’s think about the user experience of app stores as it stands today. Imagine you are a customer accessing the iPhone App Store, Android Market or Nokia Download for the first time.

Once you’ve located the correct icon or menu link to open the store, you’ll find an environment full of traditional UI methods imported from other platforms or applications.

The iPhone App Store and Android Market both employ scrolling lists, category hierarchies and keyword search to help customers find something they might want to buy. Other UI elements include star-based rating systems, different sorting options and a way to shortcut to other applications produced by the same developer. 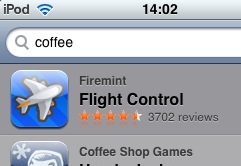 The star-based rating system used on most app stores 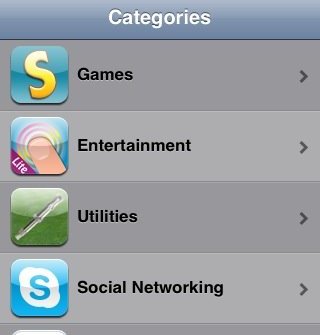 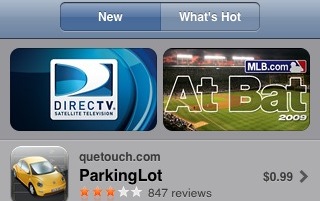 They are essentially flat databases with a few visual tweaks to help users sort, browse and search the information contained within. As a result, the vast majority of customers focus their attention on applications highlighted by Apple’s and Google’s own editorial policies rather than content tailored for their personal preferences.

Nokia’s Download application is a little different. It currently uses an interface reminiscent of Windows 3.1 (circa. 1992) to present customers with a grid of folders and icons. When I accessed it to write this article, no fewer than 3 ‘Yes/No’ confirmation messages were required before I could even load any content I could interact with. First I was asked whether I wanted to download the catalogue, then if I wanted to connect to the internet and finally which access point I’d like to use.

The first of many confirmation messages

Who am I doing business with: Nokia, Fox or Jamster?

My first attempt to explore further in the Download store generated another ‘Would you like to connect’ message, followed by an error warning and then asked me to agree to a disclaimer from a company I’d never heard of (Fox Mobile). I can only presume Nokia has outsourced management of the content in Download to Jamster, which is now part of Fox?

9 clicks, 6 of which were unnecessary confirmation or error messages, and I’d still not been presented with a single piece of content I could download, let alone something actually tailored to my individual interests.

I won’t be too harsh on Nokia Download as it is due to be replaced shortly by the new Ovi Store, but I do find it astounding the world’s largest handset manufacturer has allowed this application to ship on tens of millions of devices.

What do these problems mean for the industry?

The relative ‘success’ of the iPhone App Store is creating a problem for the mobile industry. It may have eclipsed the low benchmark established by previous application distribution attempts, but instead of prompting mobile innovators to think about how they can move beyond the iPhone experience, instead it has the market playing a game of catch-up.

I’m sure any executive at RIM, Nokia or Microsoft would freely admit they’d be delighted to achieve the 1 billion + downloads Apple seems to set to record in its first year. I’d argue they are aiming far too low. If Apple is achieving this with approximately 30m iPhone and iPod Touch customers, surely it suggests much greater potential for a store owner who can reach a larger proportion of the world’s 3.2 billion mobile customers?

We’ll be looking at the potential for change in much more detail at the MEX Conference on 19th – 20th May in London, when 100 of the mobile industry’s most creative thinkers will come together to create a collaborative response to the 8 point MEX Manifesto. You can take part in this think tank environment by registering to attend MEX.

A MEX recipe for change

To get you thinking ahead of the Conference, I wanted to highlight some of the areas where the industry can enhance the app store experience for customers:

1. The user interface
So much more can be done to improve the visual presentation and interaction flow of app stores. The current UI methodology of scrolling lists and categories is the digital equivalent of a grocery store which displays all of its 1000s of products on one huge wall a hundred metres long and 10 metres high.

More thought also needs to be given to how app stores sit within the overall interaction framework of the mobile experience. The iPhone, for example, dedicates a single icon on the main screen to the app store, a feature which provides access to tens of thousands of pieces of content. It is rather like asking users to view an art gallery through a pin-sized hole in the wall. Surely there is a better way to let potentially interesting applications flow into other areas of the overall interaction framework?

2. Payment mechanisms
Nokia recently revealed 8 out of every 10 customers of its N-Gage gaming service prefer to pay for downloads using operator billing. However, Apple requires users to open an iTunes account, Google expects users to subscribe to Google Checkout and RIM is working with Paypal. Only Nokia seems to be making a serious effort to ensure users can pay for applications in the Ovi Store via operator billing. If you don’t accept a currency which the customer is willing to use, how do expect to make a sale?

3. Harnessing network recommendation power
Mobile phones are communication devices first and foremost. Indeed, one could argue human beings themselves have evolved primarily into communication-based creatures. Few of us make physical purchases without first taking some sort of consultation, either with someone who is with us in the store, by reading a trusted magazine review or contacting our social network of friends and family. How can the mobile industry make it as easy as possible for users to recommend, consult and evaluate the people, information sources and networks which convince us to make purchases?

4. Dimensions beyond the screen
Think about the mindset of a user buying a new handset or upgrading an existing device at a retail location. Their level of interest in learning about new mobile services is never higher than at that moment. However, only a tiny fraction of retailers make any attempt to sell users additional applications at this crucial point in the purchasing process.

Why aren’t we equipping the retail network with interaction kiosks which allow users to explore the huge range of applications and automatically configure their device at the point of sale with compelling content? It is also an environment in which trained staff could help the customer to understand these features. Rather than offering dodgy cashback offers from the subscriber acquisition cost (SAC) budget, why not subsidise users’ first few application purchases?

Hopefully these suggestions will get you thinking about the MEX Manifesto Statement No. 1 in advance of the MEX Conference. Please feel free to take part in the debate by adding your comments to the MEX blog.

Speakers on this subject at the MEX Conference include Hampus Jakobsson, Founder and Vice President of Business Development at TAT, who will be exploring some of the cutting edge user interface techniques we can use to enhance app stores. We’ll then be involving everyone at the Conference in an interactive workshop, where independent app store pioneers like Neil Wooding (formerly of Handango), will help small working groups explore a series of challenges and questions on this statement.

You can take part in this think tank environment by registering to attend MEX.