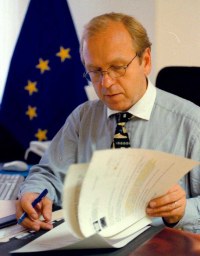 Commissioner Erkii Liikanen is responsible for enterprise and information society within the EU. Formerly a member of the Finnish parliament, Liikanen has led the development of the EC’s 3G telecommunications policy. Earlier this year he met with business leaders from the wireless technology industry to discuss the future of a market burdened with debt and technology delays.

Do you believe the high cost of 3G licenses and subsequent network build-out in key markets such as the UK and Germany will delay the introduction of innovative next generation services?

This complex issue was addressed in a recent report of the European Commission (Communication from the Commission to the Council, the European Parliament, the Economic and Social Committee and the Committee of the Regions: Towards the Full Roll-out of Third Generation Mobile Communications, COM(2002)301 final of 11 June 2002). This provided an overview of the situation of the 3G sector, analysed the major financial, technical and regulatory challenges associated with the roll-out of 3G services and identified some options to support the roll-out of 3G services.

The main challenge that needs to be faced towards the introduction of 3G services is of a financial nature. The sector has been faced with increased pressure from the financial markets and the EUR 110 billion spent on 3G licences has undoubtedly placed an extra burden on the sector. However, 3G licensing costs are just one of the several factors currently affecting the telecommunications sector – delays in network roll-out have also recently been announced or requested in member states where 3G licensing costs were low.

Over the past year, the downgrading of credit ratings has continued and significant erosion of the market capitalisation of both operators and manufacturers has taken place. The availability of investment funds has been significantly reduced, especially for alternative carriers and new entrants. Unfortunately, this has happened at a moment when the roll-out of 3G network infrastructure and the launch of new 3G services still require significant financial resources.

The difficult financial environment has obliged all telecom operators, including mobile operators, to revise their strategies and to give priority to re-balancing their financial sheets by selling non-core business, exploring new revenue sources and identifying ways to reduce capital expenditure. This overall trend of the sector has certainly affected the plans for 3G network roll-out in different ways.

For instance, some operators have given higher priority to explore alternative means to increase their ARPU by offering new services over enhanced 2G networks, such as GPRS services. Reducing investment expenditure has been another priority for operators, as indicated by several cases of sharing 3G network infrastructure, hopefully leading to lower initial capital expenditure.

Has the early success of CDMA2000 1x networks in South Korea and Japan altered your views on UMTS as the most appropriate 3G technology in Europe?

The regulatory framework applicable to the licensing and deployment of 3G networks in the EU, and in Europe at large, is essentially technology-neutral. I firmly believe, as a matter of policy, that the sector is best served by letting the choice of the 3G technology in the hands of the mobile operators themselves, without government intervention. Mobile operators are the ones who will have to make a large financial investment and therefore they should know well how to best serve their own customers.

On the other hand, I am also aware that more than 85 percent of the world’s mobile network operators (according to the UMTS Forum, more than 100 3G licenses have already been awarded worldwide via a combination of auctions, beauty contests, ‘sealed bid’ competitions and automatic awards) have already chosen UMTS as their underlying technology platform to deliver 3G services.

Perhaps, such an overwhelming demonstration of confidence on the UMTS technology is the result of the open standardisation process carried out within 3GPP (Third Generation Partnership Project) involving all relevant players, including operators, manufacturers, applications developers and regional standards organisations from all over the world. The UMTS technical specifications have been defined in such a way to provide a clear evolution path from GSM, therefore building upon the global success of GSM.

Up to now, all 3G licensed operators within the EU member states, have selected the UMTS technology. Therefore, there is a high level of confidence among mobile operators that UMTS is the most appropriate 3G technology for Europe.

Do you see wireless LAN technology as a threat or an opportunity for 3G network operators?

I am aware that several reports have been published by well-known consultancies addressing the question whether WLAN systems are a threat or an opportunity for 3G mobile network operators. There are as many different opinions as the number of reports!

The fact is that WLAN technology has the capability of providing users of laptops, palmtops and other mobile devices with broadband wireless access to the internet and corporate intranet networks. However, WLAN systems essentially offer ‘localised’ broadband access in contrast with 3G systems providing wide area coverage as well as full mobility for services of which internet/intranet access is only one.

In my view, WLAN systems can therefore be regarded as a complementary technology to 3G systems. This means that WLAN systems provide end users with an early experience of advanced ‘always on’ data services, albeit in selected locations only, and at much higher data rates than 3G, ahead of widespread 3G network rollouts.

The use of licence-exempt frequency bands, especially in the 2.4 Ghz and 5 Ghz bands for the provision of public broadband wireless access is becoming widespread in ‘hotspot’ areas such as airports, train stations, shopping malls and hotels. The proposition is attractive since infrastructure equipment is inexpensive, network deployment is relatively easy and terminal equipment is inexpensive. Ultimately, consumers and business users may benefit from other possibilities for wireless broadband access to the internet and to corporate intranets.

In view of completing the single market in the EU and in order to advance the use of broadband wireless as an alternative means of access to the information society, a harmonised approach for the deployment of WLAN systems in the EU is highly desirable. Therefore, it is important to create the appropriate conditions in order to allow the widespread provision of public WLAN services in the EU as one of the multiple broadband access platforms advocated by Heads of State at the Barcelona European Council in March 2002.

At the moment, ten member states (Austria, Belgium, Denmark, Finland, Germany, Ireland, Netherlands, Portugal, UK and Sweden) allow the provision of public WLAN broadband access services using equipment operating in ‘licence-exempt’ spectrum. Five member states (France, Greece, Italy, Luxembourg, Spain) currently do not yet allow the provision of WLAN public services over ‘licence-exempt’ spectrum in the 2.4 Ghz and 5 Ghz bands but it appears that they are ready to review their position.

What powers does the EC have to assist network operators if it becomes clear that commercial introduction of 3G is not viable under the current regulatory framework?

The European Commission has been accompanying the development of 3G for many years. Initially via the funding of related R&D projects, then by supporting standardisation activities and more recently by putting in place a regulatory framework conducive to a timely licensing and commercial introduction of 3G systems. Therefore, there is no doubt that the current regulatory framework is supportive of 3G.

However, questions have been raised about the implications on 3G services of the new regulatory framework, which was adopted by the Council and the European Parliament earlier this year and is currently being transposed into national law by the EU member states (applicable as from July 2003). Such fears are largely unjustified since the new regulatory framework foresees an exemption to new emerging markets.

Such questions, among other issues, have been addressed in the Commission’s report of 11 June 2002 and earlier in a meeting I have held with CEOs and senior executives from a large number of 3G mobile operators in May 2002.

The aim of the meeting was to identify any bottlenecks that might hinder the roll-out of 3G networks and services and to find common ways for the mobile operators together with the European Commission to revitalise confidence in the mobile industry.

On that occasion, I re-affirmed that the Commission’s role was to contribute to the creation of adequate conditions for the success of the mobile industry and to maximise economic and societal benefits i.e. to help creating favourable conditions for the deployment of 3G networks, as well as of 3G services and applications. I firmly believe in the provision of 3G services as an essential building block of the wireless information society and its success is essential to achieve our policy objectives of an information society for all.

Therefore, I am prepared to engage all means to provide political support in order to facilitate the deployment of 3G networks, services and applications.