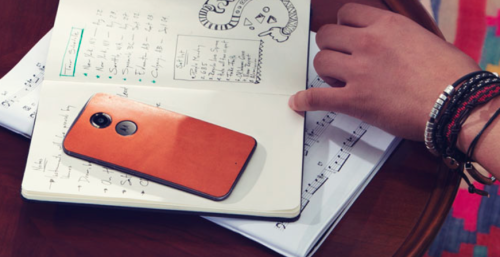 I can’t actually buy the Moto X – indeed, I’ve not even seen one in person yet – but I find myself desiring it. That in itself says something about Motorola’s ability to inspire customers through design.

Firstly, I should set a little background. I’m not inclined to irrationally favour brands. You might even say I possess a degree of cynicism after 20 years of advising and writing about the mobile technology industry. My business is helping companies understand customer behaviour and translate that into better, more usable products. Through years of events, consulting and writing, I’ve become accustomed to the tricks and the hype of new product launches and seen those who imitate and – very occasionally – those who do something original.

Motorola’s work with the X, G, 360 and Hint feels original. It feels like the work of a company where user-centred design, under Jim Wicks, is at the heart of the product development process.

Of course, every company will tell you how important users are to their design process, but many years in mobile has taught me this is usually bullshit. For most, user-centred design remains a sideline, conducted by an isolated team, where their impact is inherently limited by the corporate structure in which they operate. This is why most mobile products – despite the billions spent on developing them – are forgotten within weeks of launch.

Motorola’s ‘launch’ felt different because it was different. If you read the reports of those who were present, they dispensed with the nonsense of pretty models paid to be excited about a phone and the painful, trite ceremony of a chief executive waving a product on stage as employees force whoops and cheers from the back of the room. Instead, they invited press to their home in Chicago and spent a day introducing them to the different members of the team who’d worked on the products.

Erica Griffin, one of the bloggers who attended, made a video which gives you a sense of how refreshing that felt for journalists:

Motorola deserves praise for this and I hope other companies take note.

Seriously, next time your PR team starts planning the stage, the lights, the pretty models, the pumping music and the CEO’s idiotic script filled with hyperbole – just stop. Stop and consider for a moment how any of that reflects on the product you’re trying to launch or will help journalists understand why it is any different to every other product they’ll be writing about that year.

The results speak for themselves. Motorola has enjoyed some of the most extensive and informed coverage of a product launch I’ve ever seen. By giving press access to their experts and enough time to get a real feel for the products, Motorola has enabled journalists to do what they do best: explain news in language their audiences will understand.

This is why, despite not having handled the new Moto X in person, I find myself desiring one. One of the dubious virtues of my job is that I have access to almost any bit of mobile technology I want. I could choose from more expensive or products with more advanced specifications, but the new Moto X has an intangible appeal.

Chris Ziegler of The Verge interviewed Motorola’s head of design, Jim Wicks, and his answers provide a clue as to why the Moto X is inspiring this kind of irrational consumerism in me. In the video below, from about 7:49, Wicks gets to the heart of the design philosophy governing the new products. He says: “We’ve got to let some things go and focus on design that allows us to curate something. We’ll set it up to allow people to make great choices…but we did something which allows a person to get exactly what they want…and that’s more important than me [as a designer] getting what I want.”

Watch the whole video – it’s worthwhile viewing – but pay particular attention to that bit towards the end:

Wicks’ willingness to leave designer ego behind is the reason one customer can go on to Motorola’s website and order themselves a phone with wood trim and bright green accents, while another customer chooses black leather and metallic red.

I recall someone (alas, their name escapes me – if it was you, get in touch!) at one of our early MEX events describing two different approaches to conveying brand strategy through design. “You can be successful as a ‘we are you’ brand or you can be successful a ‘we are we’ brand, but there’s no middle ground.” That has stuck with me, describing the difference between companies which truly commit themselves to catering to individual users – like Motorola with its Moto Maker customisation – and those which commit themselves to defining an individualistic way of doing things – like haute couture brands – to which certain customers then aspire.

The X has other virtues too, like the speed and simplicity which comes from omitting the nonsensical software skins most manufacturers apply to Android. Overall, it just feels like a product which makes sense: customers can choose their own style and know that, regardless of how they personalise it, Motorola hasn’t cut corners on delivering a base specification which works well.

That Motorola has managed to achieve this across a range of products – X, G, 360 and Hint – which feel like they belong to each other, is further proof this is a result of design philosophy which is more than skin deep. Furthermore, that it has been achieved amid a potentially distracting acquisition by Lenovo, also attests to the strength of the design culture in the company.

Aside from my irrational desire for a new Moto X with a wood back, I also find myself wanting Motorola to succeed. A company like this, espousing a design philosophy like this, is good for consumers and good for the mobile industry.