I don’t enjoy wearing a watch these days. My own – a heavy, analogue thing made of steel and sapphire glass – spends most of its time on my bedside table, gathering dust. It has the occasional outing when I remember I like the look of it peaking from a shirt cuff or so I can glance at tide times when I’m on the water and am unwilling to carry a fragile smartphone in the boat.

I am, therefore, an unlikely candidate to appreciate a smartwatch. However, I was eager to try the latest generation of Android Wear devices. The Huawei Watch struck me as among the most appealing of this second wave. I had the original Moto 360 about a year ago and concluded, for all its thoughtful hardware design, it didn’t offer much I needed or even wanted.

I’m conscious this preface makes it hardly likely I will have much positive to say about the Huawei Watch, but bear with me, for in a month of living with the product, I’ve learned from both my own experiences and the reaction of others.

There’s no doubting the quality. For about £300 (the price varies according to which type of wrist band you choose), it is well constructed and possessing of both looks and materials a little ahead of what one might expect at this price. One could pay a great deal more to a traditional watch manufacturer for something only a little more polished.

The box, if such things matter to you, shows Huawei making an effort to emulate premium watch brands. There is embossed text, a soft touch interior and the timepiece itself is presented on an elevated plinth, just as you’d expect. I felt it missed some of the tiny, intangible touches which would have made it feel more expensive, but it wasn’t far off. In true luxury, the final 10 percent of finish and function is usually what takes up 90 percent of the price.

After a month on my wrist, the Huawei Watch has weathered well. The black metal finish is unmarked and the sapphire glass screen is unscratched. The leather band has softened slightly, making it easier to take on and off.

It is described as water resistant, but does not feel like a product one would want to test too vigorously in this respect. I found myself taking it off in the shower or when I was out on the water, not least because leather straps rarely fare well in these environments. Perhaps the metal banded version would have inspired more confidence?

The basics of display quality, battery life and connectivity are much improved from the first generation of Android Wear. The fully circular, always-on 1.4 inch OLED screen has a pixel density of 283 per inch. Individual pixels are just about discernible if you look closely, but it is bright in all lighting conditions – even direct sunlight – and plenty sharp enough.

I found myself constantly surprised by the longevity of the battery. In average use, with step tracking turned on and an ‘always on’ watch face, I could sometimes go two and a bit days between charges.

Unfortunately the included charger had a rather short cable hardwired into the puck, which meant it wouldn’t stretch from my plug socket to the bedside table. The puck is magnetic and, theoretically, should snap the watch into the correct position for charging. However, this was unreliable. There were several occasions when I thought it was correctly aligned for charging and I returned to my desk the next morning to find it had been slightly off-centre and had failed to charge.

This is one area where Motorola’s Moto 360 remains a benchmark, providing users with a wireless charging stand in the box, allowing the watch to serve as a handy night clock while it charges.

Connectivity, both via Wifi and Bluetooth to my paired Android phone (a Moto X), was seamless. The combination of being able to pick up Wifi on its own and reconnect Bluetooth quickly through the phone meant I simply didn’t worry about it. This a marked change from previous Android Wear watches, which came with a sense of anxiety over maintaining proximity to a paired phone, heightened by the unreliable process of reconnecting. All that is gone with the Huawei Watch. In my experience, it just worked.

The speed at which Huawei’s hardware has improved is remarkable. This watch is testament to that, as are its latest smartphones. The company has effectively moved from a low-end follower to a high-end pace setter in two years. Similarly, Google’s progress in solving the basics of Android Wear reliability and function are impressive. A year ago, the software experience was unreliable to the point of being compromised. Today, it works the majority of the time. 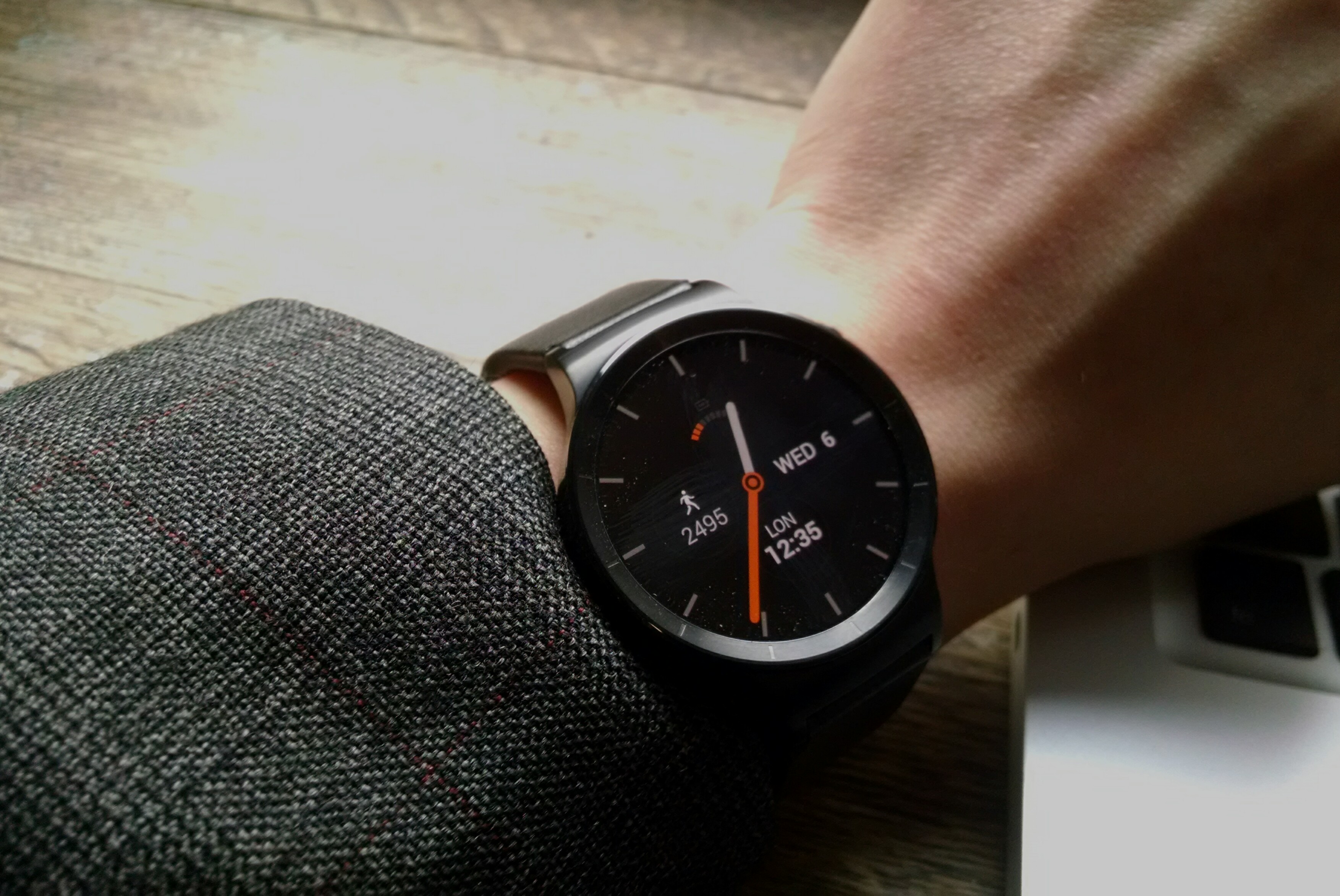 However, I am personally left with more questions than answers about how it fits with my life. Despite wearing it for a month in a wealth of environments, from home to airports, the UK to the US and for work and workouts, I feel no desire to continue wearing a smartwatch. This is not a reflection on the Huawei Watch itself. If I wanted an Android Wear smartwatch today, this one would likely be top of my list.

There were moments when it made sense, but they were rare. I found it useful for pausing a podcast without needing to touch my phone. There was also a time when I felt my wrist buzz with a time sensitive text message notification while walking through an airport. Occasionally, by showing me the caller ID, it enabled me to ignore unimportant calls and therefore avoid interrupting my work flow. Mostly it was just an interesting digital timepiece, eliciting comments from onlookers.

Weighing against this, however, was a sense that my wrist was now something which needed to be managed. The frequency of notifications felt too needy by default. Of course, I could – and did – adjust this in the settings. Each time I had to do that, the balance tipped a little further toward annoyance over convenience and anxiety over gentle enjoyment of function.

Perhaps you see now why I began this piece with a caveat about my personal bias? There will be those who welcome additional data in their lives and appreciate their wrists lighting up with the ebb and flow of digital bits. I’m not there yet, and I suspect the majority aren’t either, but there is a niche which will.

I could imagine the fitness tracking appealing to many. Fitbits seemed to be a favourite gift this year, particularly among friends and family in the US, where the intent to be fitter next year was especially strong this Christmas. For most Android Wear will do a similar job, if one’s goal is just to get moving and to be more aware of activity levels.

In my particular circumstances though I couldn’t find anything uniquely helpful beyond what I already know. It wasn’t accurate or seamless enough in measuring things like heart rate to be a serious training aid. Indeed, it would congratulate me on reaching my ‘goal’ regardless of whether I achieved my ‘steps’ or ‘hours’ by wandering around a mall eating cookies, or running up a big hill in the rain. Great for deceiving oneself, but unlikely to make one healthier.

Smartwatches are getting better and the Huawei Watch is among the better of them. However manufacturers’ understanding of what ‘smart’ really means needs to adjust significantly before they become relevant to the masses. Paradoxically, this will likely mean reimagining them not as smart devices in themselves, with more functions, but rather as smarter links in an overall flow of digital experience. Perhaps in future we will judge these devices on how frequently they enable us to sidestep traditional digital interactions rather than how well they emulate them?