I first wrote about the Moto 360 in December 2014. Suffice to say I was not impressed:

“The Moto 360 looked very different in real life to the media I’ve seen online. Without any attempt to show it in context, or market it as a luxury item, seeing it in a shop felt like a disappointment. My gut feeling is that these need to be sold like watches and jewellery, not consumer electronics.”

However, I decided the only way to really understand the user experience was to live with a Moto 360 day-to-day. After a couple of weeks, I remain unconvinced by the product, and the wider smartwatch market in January 2015, but my initial impressions of the 360 did change over time, albeit not enough to convince me these products are relevant to all but a minority of early adopters.

The category is afflicted by a paradox: smartwatches are currently incapable of sufficiently useful actions in response to genuinely important events, yet are an unnecessary distraction when notifying you of unimportant events. As a result, there are too few occasions on which they are either uniquely useful or serendipitously engaging enough to justify wearing one. 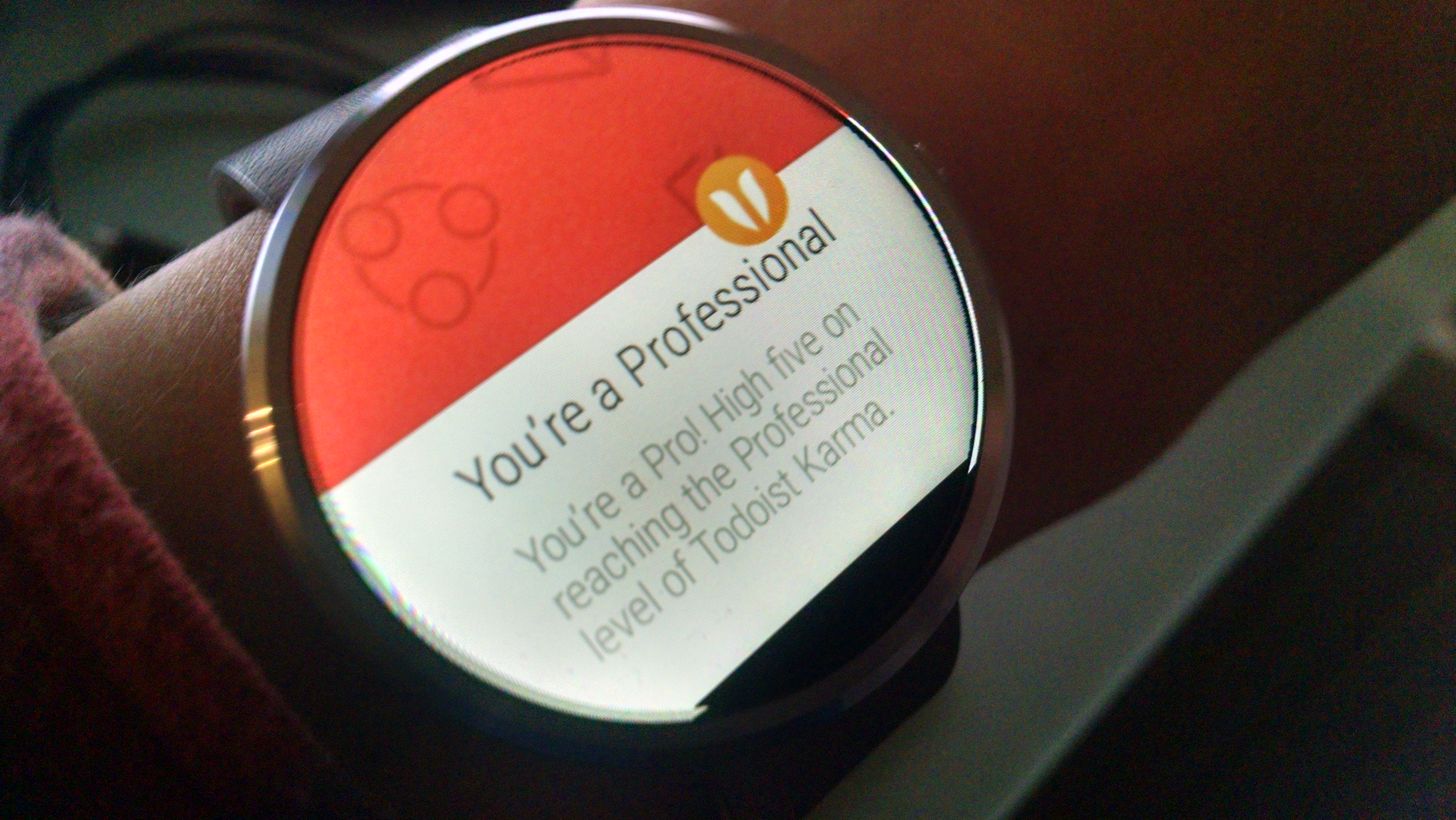 Do users want their smartwatch notifying them when they’ve become a ‘To-Do List Professional’?

In addition, their physical properties – ranging from relative fragility to discomfort – reduce the likelihood users will be wearing them at the times when they may actually serve a useful function.

For example, there are instances when the notifications and simple actions the Moto 360 supports would be preferable to taking out my phone. Cooking or outdoor activities like kayaking and biking are obvious examples for me personally. I’m sure others can imagine plenty of occasions when they’d just prefer not to carry a phone or don’t want to touch the screen with dirty hands or are worried about damaging the phone. However, in all of these scenarios, I found I wasn’t wearing the watch for a variety of reasons: I was worried about waterproofing, it was uncomfortable to wear or the watch was useless because I’d left my phone behind anyway.

As a result, I found myself wearing the watch only on occasions when I already had access to other, more capable and easier to use devices, like my phone, tablet or PC. In these situations, the watch seemed like a frivolous accessory and the least usable touchpoint for interacting with my digital world.

Some of these issues are already being address by other smartwatch models. There are some, like the Sony Smartwatch 3, which are more water and dustproof than the Moto 360, or others, like the Samsung Gear S, which have their own built-in cellular connectivity and GPS rather than relying on a phone paired over Bluetooth.

The physical limitations can and are being overcome, but a wider issue remains for the Android Wear platform and smartwatches as a whole: what are they uniquely suited to doing better than all the other digital touchpoints in users’ lives?

I caught glimpses of possibility in my time with the Moto 360. For instance, I like to listen to podcasts through the loudspeaker of my phone when I’m doing odd jobs around the house. The Moto 360 senses when I start playing a podcast on the phone and displays a set of controls, allowing me to pause, skip and change the volume from the watch.

However, in practice, it failed for two reasons. Firstly, the most likely time for me to be listening to podcasts is when I’m doing something like cooking, carrying firewood or in the workshop, all of which are jobs where I didn’t want to wear the watch because I was worried about damaging it. Secondly, the Moto 360 seemed to lose its Bluetooth connection to the paired Moto X as soon as I walked into another room. It was unreliable at reconnecting, meaning the play controls were rarely displayed when I wanted them.

Similarly, it had potential as a device to work in concert with the Chromecast plugged into my TV. I would have loved the option to be able to start a playlist on the phone, use the Moto 360 to transfer it to the TV and take advantage of the better sound system. However, Android Wear doesn’t seem to support those kind of multi-touchpoint interactions yet. There are also practical limitations around the flaky Wifi connectivity of both the phone and the Chromecast, which need to be reliably connected to the same network for most functions.

The overall connectivity of all these devices doesn’t seem robust enough yet to deal with the reality of how people move around their houses or offices.

Another possibility which intrigued me was to use the Moto 360 as a remote interface for my phone camera. The notion of separating the viewfinder and shutter button from the camera itself could open up new categories of photography. In use, however, this function is limited because the 360 can currently only serve as a remote shutter button, with no way of previewing the viewfinder on the watch. Essentially you’re shooting blind. The photo below took 7 attempts to even achieve the right phone position to capture a shot on a walk. The captured photo is shown on the watch after the shot is taken, but cannot be shared from the 360 – you need to go back to the phone to do anything with the image. 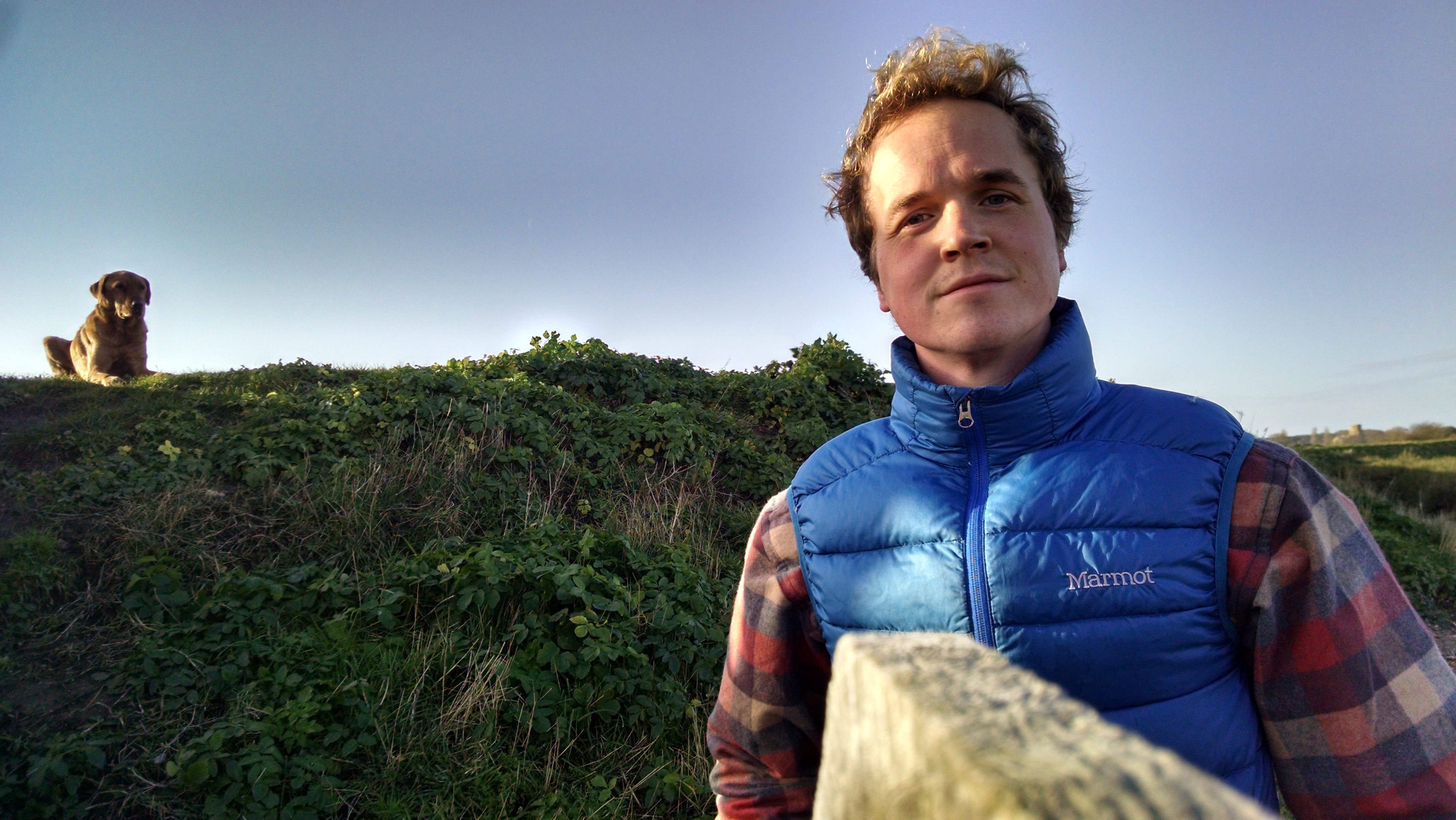 There were some pleasant surprises around product quality. My initial impression had been formed by using a Moto 360 in-store and, with hindsight, I’d say the retail presentation did it a disservice. The packaging and watch itself surprised me with quality materials and a premium feel. It never created a ‘wow’ factor, either with me or others I showed it to, but it did feel well built and handsome.

Also, the confusing and seemingly broken Android Wear user interface I observed on the in-store model has been much improved by subsequent software updates. There is still a learning curve which would deter the majority of mainstream consumers, but it has reached the level where it is usable for those with a passing interest in technology.

There are logical underpinnings to the Android Wear user interface framework now, with the gestures for dismissing notifications (swipe right), taking actions (swipe lift), muting the device (swipe down) and bringing up the watch menu (tapping the watch face) consistently implemented.

Voice interactions, however, are almost useless. My success rate in waking the watch with the ‘Ok Google’ command, dictating text or inputting commands was about 10 percent, even in quiet, indoor environments with good connectivity. As a result, almost all of my interactions with the watch were through touch input, and I abandoned even trying to use voice commands within a few days. 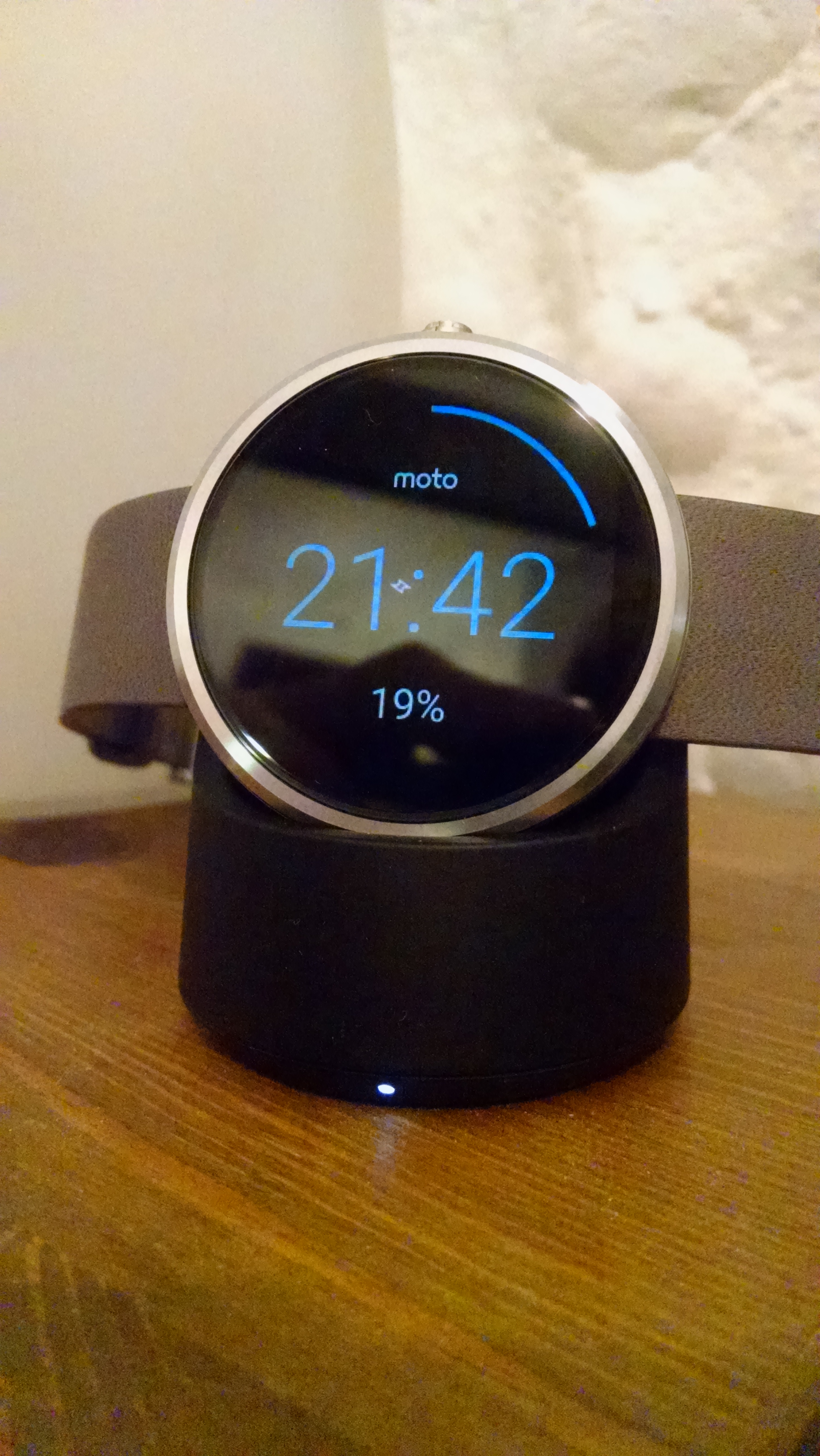 Moto 360 in its wireless charging dock on a nightstand

Battery life, a common cause for complaint among early reviewers, has improved with the latest software updates to the point where most users could expect around 2 days from the Moto 360. I found it irrelevant for the simple reason I always take my watch off before bed and liked the night clock display which activates when you drop it into the wireless charging cradle. As a result, I was naturally recharging it each night anyway, and never came close to draining the battery during the day.

The wireless charging dock itself is a strength of the product. It is nicely weighted so that it feels anchored to your nightstand, recharges quickly and is conveniently angled for both dropping the watch into the dock and showing a soft blue time display easily viewable at night.

The Moto 360 is also equipped with an integrated heart rate monitor. This might have been enough to convince me to wear it more often for outdoor activities (despite the creepy language – see photo – Motorola choose to inform you they’re ‘looking forward learning more about you’!), or to rely on it more heavily as a health tracker, but in practice it is pointless. It only seems to track your heart rate upon command, meaning any data will be skewed by if and when the user remembers to activate it.

I looked at my heart rate occasionally when I was sitting at my desk and once when I remembered on a walk, but never remembered or could be bothered when I was doing meaningful aerobic exercise like biking and kayaking. These are the times when heart rate data may give a more meaningful picture of fitness levels than you can obtain from a phone app alone, but they are also the least likely times it will be convenient to mess around with a smartwatch. 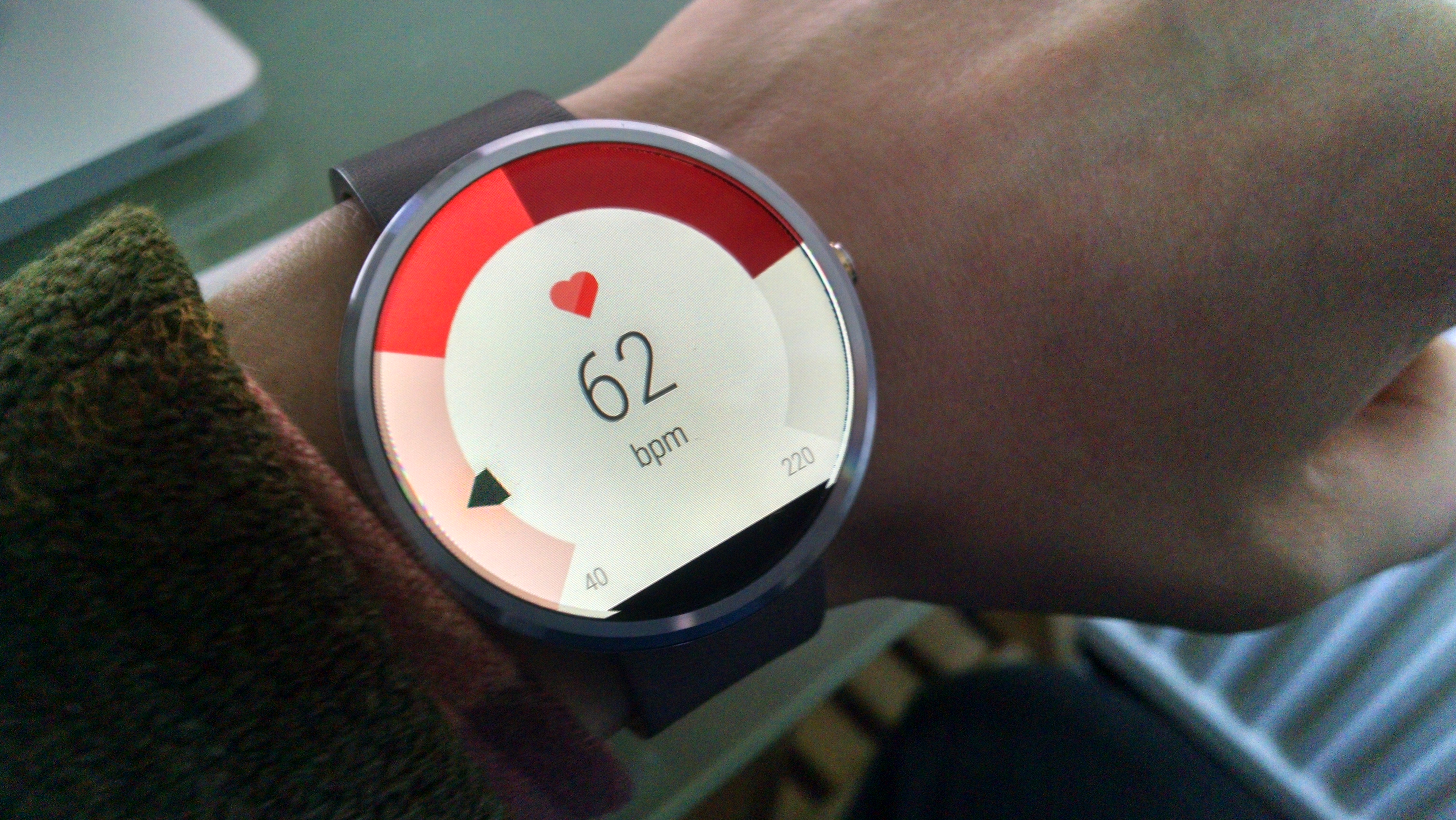 Moto 360 as a heart rate monitor

My limited experimentation with Google’s Fit service also highlighted the inconsistent way in which Android Wear integrates with phone and web apps. I’d been using Fit on my Moto X for a while previously, but it didn’t seem to synchronise data between the smartwatch and the phone when I first paired the 360 with my X. Instead, I found myself having to trawl through support forums to find an arcane work around to force the watch and phone to start syncing Google Fit data. It worked eventually, but it wasn’t intuitive and I suspect there are few people who would bother investigating how to do it.

After living with it daily, I’ve concluded the Moto 360 and Android Wear aren’t for me – yet – and I can’t think of many other types of user who would find it a satisfying experience currently.

However, my time with the 360 did reveal hints of how a small, wearable digital touchpoint could enhance an overall digital experience by working in concert with phone, PC, home entertainment and other devices. I hesitate to use the term ‘smartwatch’ to describe such a product as I’m not convinced form factors which mimic the wristwatch as we know it today are the best solution to this design challenge.

Whatever form this new wearable touchpoint takes, there are a mixture of basic usability and wider experience questions to answer before it becomes relevant for the mass market: