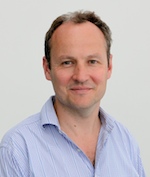 Jason comes to MEX from the world of broadcasting, intrigued by the challenges and opportunities of using mobile devices in his industry. He is a TV and digital journalist with 20 years experience. He’s worked with some of the biggest names in television news and for all three main news broadcasters in the UK: ITN, the BBC and Sky. His career began at the BBC as a reporter and producer, and helped launch the BBC News Channel in 1997. After a stint at Sky, he moved to ITN where he edited all ITV’s main bulletins, including the evening news and News at Ten, both of which won the RTS News Programme of the Year Award under Jason’s tenure. As digital became increasingly important, he took over the newly created role of editor of web development, responsible for the digital strategy for ITV national news, encompassing social, web and mobile. He is currently working with ITV to re-develop the ITV news web-site in early 2012, and mobile news gathering and broadcasting will be a core part of that. Jason wants to see how mobile can help us remove the shackles of broadcasting and allow his teams to file anything, from anywhere, at anytime.