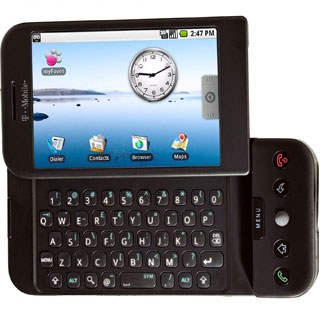 Google, T-Mobile and HTC this week announced the G1, the first handset powered by Google’s Android platform. The press event in New York confirmed specifications already leaked out through various fan sites over the last few weeks: a touchscreen 3G handset, with a QWERTY keyboard and trackball. Other features include GPS, a 480 x 320 screen and 3 megapixel camera.

It will debut in the US next month, followed by a UK launch in November.

The G1 device itself is already attracting considerable consumer attention: the BBC’s morning news programme picked it up on the day of launch and asked me to give an interview explaining what it meant for users and the industry. Today I’m recording a show for BBC Radio 4 which will provide further coverage (this will be broadcast next Monday afternoon, 16:30 – 17:00 London time).

However, this is a much larger and more complex story than the single handset being announced on the T-Mobile network. 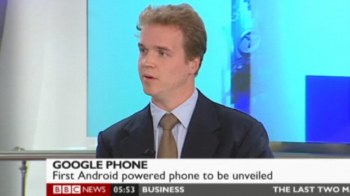 If you’re in the UK you can see Marek Pawlowski’s BBC interview about Android on BBC iPlayer until Tuesday, 30th September. The BBC Radio 4 interview will be broadcast on Monday, 29th September at 16:30.

The ultimate goal of Google’s mobile strategy has little to do with making a success of Android or building so-called ‘G-Phones’. Google’s business is selling advertising space. Strip away the hype, the friendly multi-coloured logo and all those free services we’ve become addicted to and you’ll find Google’s revenue comes from a single source: connecting advertisers with potential customers.

Android, the G1 and future G-Phones from manufacturers like HTC, Samsung and LG are a means to an end for Google. It believes Android will have two effects: firstly, devices running the Google OS will make it easy for more customers to access mobile web services; secondly, the free availability of Android will force other companies in the mobile industry to improve their own mobile internet access features. Both of these should result in Google achieving its goal: expediting the growth of mobile internet usage so it can make money from mobile advertisements.

Don’t expect this to be immediately obvious. Google employs a lot of smart people who spend their time thinking about how customers interact with its services. They know that the quickest way to annoy users is to overwhelm them with advertising. As such, a lot of Google’s current mobile services have no obvious advertising at all – they maintain a single-minded focus on making it as easy as possible to access emails, view maps or any of the other features Google already offers to mobile users.

Google’s management has already stated it believes mobile advertising will become a bigger business for the company than its existing desktop franchise, but that this will be a long-haul. The truth is that no one really knows how effective mobile advertising will be or how to provide a customer experience users genuinely value. It’s going to require a great deal of experimentation. However, we do know that mobile platforms like Android make it easier for companies like Google to learn the behavioural traits and contextual factors which will enable them to deliver more targeted, appropriate adverts and services.

Here at PMN, we’ve long held the view that mobile will require a different approach to what we’ve seen in other advertising sectors. The unique conditions in which mobile devices are used mean that advertisers can no longer be in the business of capturing attention and distracting customers – instead, they must focus on learning as much as possible about the user’s background, current objectives and available time to ensure they can make it as easy as possible to reach the services they want. This is about delivery rather than distraction.

When you think about mobile advertising in this way, the billions of dollars Google has poured into developing ‘free’ services such as email, calendar, reader, photos, videos and maps start to make sense. The more information users entrust to these services, the more accurate a picture Google is able to build of its customers and the more valuable its advertising opportunities become.

The goal for Google is a world in which mobile devices enable it to know where users are, what they are doing, what they’re trying to achieve and how much time they have available.

Android, the G1 and subsequent G-Phones are both a testing ground for this vision and a short-cut to achieiving it.

If Android-powered devices succeed in the consumer mainstream, Google will have a good chance of ensuring the right market enviroment for its long-term business objectives by embedding its key software and services in the platform. However, this is by no means necessary for Google to ultimately prevail in mobile, nor is it guaranteed (Android is modular and open source – handset manufacturers and operators can choose which components they use and which they leave out).

Even if Android only captures a small percentage of the market for mobile platforms (the latest estimates from Strategy Analytics predict the G1 will account for about 4 percent of US smartphone sales in Q4 2008), its presence in the market should catalyse other players to include similar features. In the long-term, this will play into Google’s hands by ensuring all devices come equipped with the location-based technology and rich browsing environment it needs to deliver mobile services powered by smart advertising to users all over the world.

So what does this mean for existing players in the mobile business?

In brief: increasingly intense competition with new entrants who are willing to change the rules. Google’s approach – and it is worth bearing in mind that it is just one of several companies who share similar ambitions in this space – will challenge players throughout the traditional telecoms value chain. Operators, handset manufacturers and software developers will all need to consider their competitive response.

In the mobile industry’s rapidly maturing landscape, it will be the companies who best understand and respond to consumer needs that capture the lion’s share of the value. This is true in any mature business and, make no mistake, Google’s move into this market is a very clear sign that mobile is maturing.

The world in which handset manufacturers crammed the latest technology into devices simply for the sake of having the best specification sheet and operators flogged them to consumers on the basis of megapixels and memory is changing. If we as an industry are serious about providing a great mobile services experience which extends beyond voice and text, we will need to take a much more integrated approach.

It has been fascinating to watch ‘old school’ industry commentators pick apart the technicalities of the G1 spec sheet and Android platform, all the while forgeting to look at this announcement through the customer’s eyes. When we switch our world view around and put ourselves in the place of the average customer, the G1 represents a simple and attractive proposition: Google, email, maps, music and photos on the move.

End customers tend to look at these offerings very differently and that is one of the reasons why the industry is still struggling to expand into new areas despite many years of technological advances. Customers will measure the attactiveness of this proposition by metrics like the in-store experience, the number of seconds it takes them to find something familiar (like access to their Gmail) the first time they pick it up and whether the mapping interface looks like the desktop maps these use on their PC every day.

That’s the reality of what the world looks like when you see it through the customer’s eyes and that is something Google is very good at. It is worth remembering this is a company with the world’s most valuable homepage, yet it still refuses to cash in by cluttering it with anything superfluous to the user experience.

Consider the contrast with Nokia’s current Ovi offering. I received an email today informing me: ‘Ovi is open. Welcome’. It went on to advertise how it would help me ‘keep my life in sync’ and showed off the full range of Ovi services, from contacts and calendar to files, maps and games.

Excited to see the launch of Nokia’s new, integrated approach to mobile services I hurried over to the Ovi homepage to register. The process was simple and in a few minutes I had received the settings on my phone and ‘synced my life’.

I was hugely disappointed to find Nokia’s first foray into the integrated mobile services business lacks one crucial thing: integration. As it stands, the Ovi sync process basically backs up my contacts and calendar to a web-site. The games portal, the photo sharing, the mapping and the file sharing all require separate accounts and sign-on. It is a shockingly disconnected approach.

I truly had high hopes for Ovi. Nokia has been making all the right noises about taking a new approach to developing mobile services and has even re-organised its business structure to ensure a more joined-up approach to building devices and software which work in sync.

However, in its current form, Ovi represents a classic example of what happens to the mobile user experience when a company uses company-specific rather than customer-specific performance metrics. Sure, Nokia’s management can now say it has ticked the right boxes to ensure it offers a similar range of mobile services to the G1 and the iPhone, but the customer reality is a world away from the total experience offered by these competitors.

Long-term, I still believe handset manufacturers like Nokia are best positioned to provide a truly integrated mobile user experience. Not only do they have the hardware and software development resources to develop truly customer-focused products, the economics are also in their favour.

As we can see from offerings like Nokia’s ‘Comes with music’ and Sony Ericsson’s PlayNow Plus, manufacturers can afford to finance these services in order to sell more handsets. While customer’s continue to associate the main value in mobile with the physical representation of their users experience (i.e. the device), the value equation will continue to slant in favour of the device companies.

However, this week – here and now – these companies should take heed of a very loud wake-up call. Google’s first foray into mobile might be a tiny ripple in the great sea of the telecoms industry, but it is the clearest signal yet that there is a new generation of companies who are setting out to eat the industry’s lunch by paying greater attention to the total user experience.

Let’s get some discussion going on the blog about this issue. Do you believe Google really understands how to deliver a properly integrated mobile user experience? What does this mean for operator portals? Post your comments to this article…