In December 2013, I wrote about my experiences with the Q10 and Blackberry 10 operating system, a platform I came to as a novice, concluding:

“Why would anyone use a Blackberry Q10 in 2013? The answer, as I’ve found in four months of testing, is simple: speed, battery life, keyboard and the quality of connectivity.”

At the time, Blackberry’s stock sat at about $5 on the NASDAQ, near historic lows, the company had just appointed a new CEO and it was attended by a storm of negative publicity. Despite my overall favourable impression of the Q10 and the innovations of its software platform, the wider strategic problems were obvious:

“…execution has been poor. The new generation of Blackberry 10 devices took too long to reach the market and when they did they were overpriced. To remain relevant, Blackberry must identify the unique qualities which gave its brand such appeal a few years ago and work quickly to direct the engineering talent remaining at the company to expand on these. The Q10 provides hints: a good physical QWERTY keyboard is a standout differentiator. There simply aren’t any other companies offering this experience, which is still prized by those who create content on their mobile devices. The uncompromising quality of connectivity and battery performance. The speed and efficiency of the user experience, particularly in messaging and content creation. Security and reliability. These are the characteristics which stand a chance of making Blackberry a success again within a significant niche of individual professionals and corporate deployments.”

Blackberry’s new CEO John Chen has acted decisively and, as I write this in September 2014, the stock has doubled to over $10 on the NASDAQ as investors have warmed to Chen’s strategy and execution. Crucially, he has refocused the company on its core of professional users, reduced the workforce and cost base to reflect its current market position, shored up the balance sheet and begun to re-invest – through acquisition and internal development – in core areas like security, messaging and enterprise device management. As an example, Blackberry recently acquired our 2010 MEX Innovator of the Year, Movirtu.

I like Blackberry’s new strategy, I’m impressed by Chen’s execution and I am confident about its future product pipeline. In particular, the Blackberry Passport, released in September 2014, may have been criticised by the tech press for its outlandish looks, but it will be well received by Blackberry’s core of professional, demanding customers. It has the characteristics necessary to impress this niche, namely the ability to do real work on the move by virtue of its large screen, innovative keyboard and big battery. Its unusual looks will actually play in its favour, re-establishing Blackberry as a status symbol device in corporate meeting rooms, because it stands out as different and expensive.

I also wanted to share recent findings from my continued use of the Q10 and new experiences with the Z30, it’s larger, all-touch sibling. My original and extensive piece on the Q10 remains for reference and 9 months on I stand by its conclusions.

However, I’ve also discovered new things, which are relevant both to Blackberry’s future and the wider strategy of mobile user experience:

The moment I picked up the Z30, it reminded me Blackberry knows how to manufacture premium products. The weight, material choices and packaging all speak of a certain quality and longevity. Blackberry has an ability to make components which add up to something greater than the sum of their parts. The screen specification of 5 inches and 720p, for instance, does not stand out on paper, but in practice the quality of the slightly curved glass, coating, brightness and pixel type combine to feel superior to others with theoretically better specifications. It’s intangible, but it’s there.

That theme continued throughout my exploration of the hardware. Everywhere I found little touches which enhanced the experience. The inclusion of stereo speakers, for instance, made this the first device I’d actually consider using for music playback on its own, without connecting to a portable speaker. For a smartphone, the sound quality was impressive, and particularly noticeable when holding the device to watch videos. The single speaker on my Q10 is loud and useful for listening to podcasts, but the stereo speakers of the Z30 are far superior. 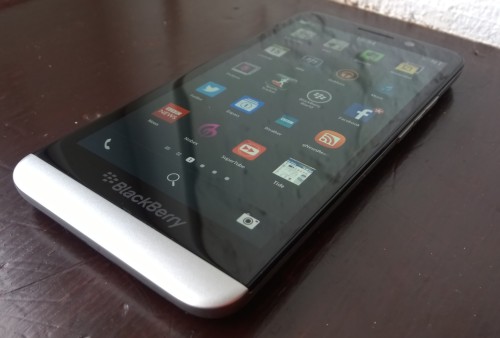 When the Z30 was announced a year or so ago, the majority of commentators chose adjectives like ‘huge’ and ‘heavy’ to describe it. The market has changed somewhat since then and the Z30 is now far from being the biggest smartphone. In fact, I found it easily pocketable and a pleasure to hold. Size never really tells the full story when it comes to mobile devices. Instead, usability is determined by a combination of shape, the resulting balance and material choice. In the case of the Z30, it balanced just right for me and the grippy, durable glass weave plastic used for the rear casing meant it never slipped.

I do, however, have one major gripe about the hardware of the Z30: the voice key on the right-hand side protrudes and is irritatingly easy to press by mistake. This might sound like a minor annoyance, but it has unfortunate consequences: the voice key is also used to pause and restart music playback, as well as activating the voice input assistant with a long press. There were numerous occasions on which I started playing music by accident in my pocket (including in meetings!) or found my finger resting on it and starting the voice assistant. It is a simple thing to solve; indeed, the Q10 has almost the same button configuration, but with the crucial difference that the voice key is less prominent than the volume buttons alongside it – this works much better. Simple though it would be to solve, the consequences were infuriating enough that this is one of the major reasons I’d still chose the Q10 over the Z30.

The Blackberry 10 platform, in the 10.2.1 form I tested on the Z30 (10.3, a substantial upgrade is due in late 2014), feels better suited to a big touchscreen. There were moments when I relished the expansive screen, like browsing my RSS feeds in gNewsReader, watching videos with the SuperTube app or opening web pages. For consumption activities like these, big touchscreens work great.

Maps, including Android apps like Google Maps – which can be hacked on to the Z30 with a little patience – look much better on the 5 inch screen, of course. I could just see so much more of the map at-a-glance that it made a tangible difference to the navigation experience compared to the Q10. A note of caution is needed with regard to Blackberry’s own built-in Maps app in its current form. There are occasions when it works fine, but there were also several when it performed poorly as a satnav. Suffice to say I have seen many tiny country lanes I wouldn’t otherwise have discovered. It is a quaint notion if you happen to have infinite time available, but not ideal when you’re in a hurry.

Luckily, the addition of Blackberry’s Android run-time has expanded the selection of alternative navigation apps and other third party software. There are nuances to it being a non-Google Android device – for instance, some light hacking is required to run Google’s own apps and some don’t work at all – but most Android apps ran well on the large screen of the Z30. The situation is set to improve further in the 10.3 release of Blackberry’s platform, which incorporates Amazon’s Android app store and widens compatibility to the newest Android apps.

Once my focus turned to creating content, however, I found myself missing the hardware keyboard of the Q10. The Blackberry 10 virtual keyboard is very good on the Z30, with its intelligent completion engine placing suggested words above where your finger would move next on the QWERTY layout, but there is something about physical keys which seems to compel me to be more productive. It is, perhaps, indicative of how impatient humans have become that the fraction of a second it takes for a virtual keyboard to appear on screen can, in aggregate, add up to enough of a delay that the instantaneous, always available nature of hard keys feels more responsive.

Other Blackberry hallmarks were also present on Z30. Battery life is extraordinary. This is a device you can use extensively for a full working day, rising early and finishing late, across planes, trains and automobiles without worrying it is going to die on you. I still prefer the replaceable battery of the Q10 and the knowledge I can carry a spare with me for overnight business trips, but in reality there was just a single occasion in my months with the Z30 when I actually would have needed to replace the battery on the move.

The Blackberry Hub, with its integrated list of calls, messages and social media, remains my benchmark for reliable communication on the move. On days when I’m in and out of meetings, on subways and planes, there is just this sense that you can reply to your messages, hit the send button and know that the Blackberry will ensure it is delivered when connectivity returns. It is an intangible quality but one which comes, I suspect, from months of usage when I’ve never once had a message fail to send and never once picked up the device to discover it wasn’t up-to-date or suffering from a synchronisation error. Still, in 2014, that remains are rare quality. 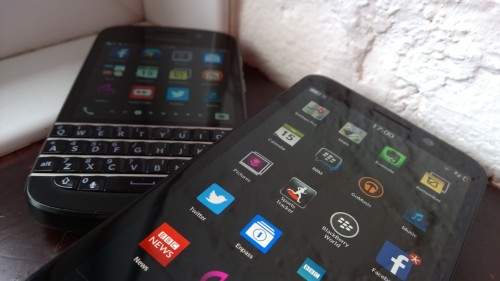 I will return to the same question I asked about the Q10 in December 2013: why, in the current market, would anyone buy a Blackberry Z30? It comes down to 3 ‘Bs’: build quality, battery life and big screen. My lasting impression of the device is of its solidity, durability and suitability for consuming content. I suspect I will return to the Q10, but those standout qualities of the Z30 remain a tempting draw.

More importantly, perhaps, the Blackberry Passport, which combines a hardware QWERTY keyboard and 4.5 inch square screen at 1440 x 1440 resolution, has the potential to combine the most favourable properties of the Q10 and Z30 in a single device.

I will report back with further long-term observations on the Q10, Z30, Blackberry 10 OS and Blackberry Passport once I’ve had time to really understand their user experience.