In 100 years time, will it be important for your descendants to be able to look back at the digital artefacts from your life in the same form you experienced them? For instance, today I could look back at a letter written by my great, great grandparent and experience both the message (i.e. the content) and the medium (i.e. its physical characteristics) just as they did.

However, even within the relatively short span of my own life, there are already digital artefacts I can no longer experience in the same form as they were created. My first digital communications were sent through the CompuServe network, from a Windows 3.1 PC with a 14.4 Kbs modem. Unlike letters – or other communications embodied in physical form – I never had any control over the preservation of the digital medium. 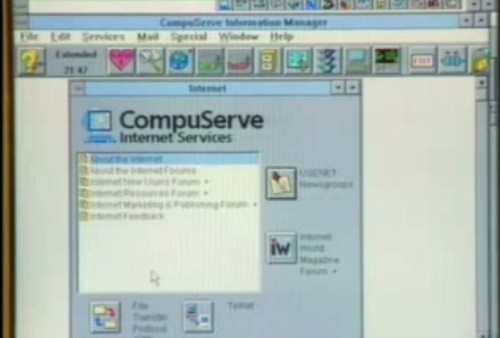 CompuServe is now gone for ever and there is no way to recreate the experiential elements analogous to the physical characteristics which defined a previous generations’ correspondence: the colour, texture and shape of the paper, the style of handwriting, the postmarks and stamps. Comparable experiences like the process of opening the CompuServe programme, listening to the modem sound, checking to see if a number appeared above the ‘new mail’ icon or reading the messages within the original UI have already been lost to the relentless march of technology.

Should we be doing more to preserve both the medium and message of our digital experiences for future generations? For a historian, would there be a difference between being able to read the correspondence of a public figure within the same interface used to create it, versus simply being able to access the content of that correspondence?

I was prompted to consider these questions by a thought provoking talk from Amy Chang, one of the team organising ‘Moore in Focus‘, an exhibition of the correspondence between Sir Robert and Lisa, Lady Sainsbury and Henry Moore. The talk was given at HotSource, the monthly Norwich-based Meetup, and the free exhibition is at the Sainsbury Centre for Visual Arts at the University of East Anglia in Norwich until 20th July 2014.

Amy talked about the importance of being able to exhibit the original letters and postcards which comprised this correspondence. The curators had access to the Sainsbury archive and were then able to work with the Henry Moore Foundation to request the corresponding letters, giving a complete picture of the role these items played in a lifelong friendship between the Sainsburys and Moore.

Amy then asked us to consider how the rise of digital communication could affect exhibitions like this in the future. She raised questions about whether the speed, convenience and increased volume of communication is changing the nature of correspondence itself, but also about the preservation of those exchanges.

It is an area we’ve explored through various MEX activities in the past:

I’d be interested to hear your thoughts on this. What were the first digital communications you sent and what device did you use? Could you still access them today? Are you doing anything currently to preserve digital artefacts for the future?