Michael Trudgeon of the Australian multi-disciplinary architecture and design practice Crowd, responds to point # 6 of the MEX manifesto with an article exploring the relationships between mobile users and the built environment. At the cutting edge of architecture and mobile telecoms, a new discipline is emerging…

In the mind of the mass-market user and the mobile communications industry, architecture is always the passive back ground to active technology and the ever more pro-active user. The home is a castle and public spaces are impassive and solid. Like the background cells in traditional animation, architectural environments never change, while everything else glides past them as the narrative of life unfolds.

The contemporary mobile communications node is designed to function as a music player, camera, e-mail client, internet browser, personal computer, bill paying facility, movie player, tape recorder, torch, search engine and mapping tool. It can tell you where you are, today’s news, where your friends are and it can store all of your personal memories, momentos, projects, photographs, music and movies.

Amid all this technological development it seems natural for phone-to-phone communication to evolve into phone-to-computer exchanges. Parallel with this is the proliferation of computers as a part of every product around us, giving us not only a person-to-person platform but also a person-to-‘thing’ and thing-to-thing communications platform.

Japanese ‘Keitai’ or mobile phones already act as bar code readers and there is an emerging culture of the mobile phone as a portal to unlock information and deliver rewards. So what if you think of the phone as a magic wand and everything in your surroundings has a computer in it or is controlled by computer? What if the products in your built environment were computer controlled and therefore accessible, interface-able and potentially controllable via your mobile phone? Extend this further and we can envisage the products that constitute the built environment itself gaining embedded intelligence – suddenly your entire environment becomes a domain for your control and interaction.

As the mobile phone is maturing into a sophisticated control device, new architectural products are emerging independently as computer controlled or RFID tagged systems. These are being developed to tackle lighting, security, maintenance, entertainment and thermal comfort demands. Contemporary architects are fascinated by the streams of data these systems generate. 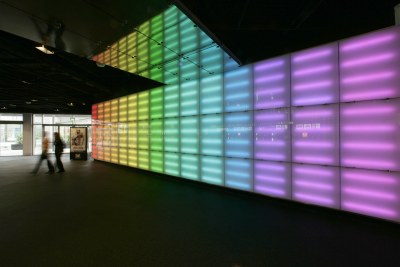 Light wall at Hoyts cinema in suburban Sydney, built so in the future it could support input from mobile devices.

In a climate of dissatisfaction with modernism, many architects see this data as the key to re-conceptualising modern architecture as being an ‘alive’ presence, manifest by visualising the changing streams of data as the building’s new electronic skin or cloak or sculptural form.

Architects take the province of their design remit very seriously. While an interest in dynamic forms and shifting displays may suggest an ambivalent or multivalent authorship in determining the precise user experience, architect’s see any intervention by external parties or users intervening in the details of a building’s expression as entirely inappropriate. It would be like re-arranging Frank Lloyd Wright’s furniture – this is a big no-no and undermines the essence of the architectural gesture.

However, at the very boundaries of architecture and within installation-art a hybrid discipline is emerging that seeks to exploit the potential of this stand-off between ubiquitous computing in environments and the personal control users can exert.

In the 1960s architects like Cedric Price and Archigram saw the potential for new technologies and materials to make buildings very flexible, with systems that responded to user demands, often changing the very shape of the building. Artists like Laszlo Moholy-Nagy, Rebecca Horn, E.A.T. (Experiments in Art and Technology), Anthony McCall and Natalie Jeremijenko have created dynamic or mobile installations that respond to or invite interference or input from viewers or participants. Projects like the E.A.T. Pavilion at the 1968 Osaka Expo put the user at the centre of a dynamic spatial experience. This tradition is now called interactive or performative architecture.

By understanding the mobile phone as a wand, capable of sending control signals, data and images, it is now possible to construct environments that respond to or are modulated by user input and that display user created content as part of the spatial experience. Such an approach focuses on the relationships between people and space rather than thing-to-thing or person-to-thing. 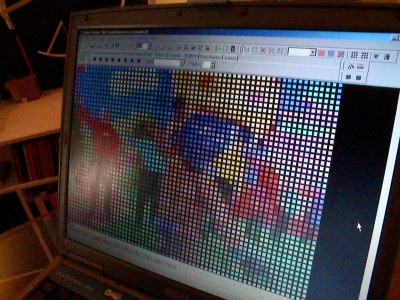 Laptop running software to convert user-generated MMS into a format which can be displayed by an LED wall.

With developments in mobile phone technology like the gestural interface we can see the possibility of people’s motion, waving the phone like a wand in particular patterns, driving shifts in spatial ambience. Users’ actions become program information for the software and configure or control the space.

The consumer becomes the ‘consumactor’.

Marshall Mcluhen and Buckminster Fuller have both observed that space is never really just a passive wrapping, but in the interface between architecture and communications technology, the potential interaction has not been exploited. The phone can become a play-and-production platform. Play is not restricted to individual gaming on your phone – it can become distributed gaming in shared environments. As a production tool, it can launch creative output either as displayed content in the environment or as algorithms to control other devices and surfaces.

In his book ‘The Extended Organism’, the American entomologist J. Scott Turner talks of boundaries where information, energy and material is processed and exchanged. He proposes that the traditional biological model identifying an organism by its physical boundaries fails to acknowledge the significant external processes that are often so fundamental to the organism’s life that they may be considered as external organs. They assist or mediate between environment and the organism’s own internal life support systems.

This model provides an apt description of the complex relationships humans have to their artificially fabricated environments and the attendant social protocols. Electronic communication devices, as communicators, controllers or mediators, sit at the centre of this model, along with ubiquitous computing, GPS systems and locative media.

Currently the graphical user interface on mobile phones does not reflect their potential to act as mediators or controllers. Such devices could become perfectly suited to provide the connection between user and environment, as well as user-to-user.

In the whole area of thing-to-thing communication, the phone can become an active agent in any environment, asking questions and acting as a research tool, looking for products and services that the user prefers or needs. This begins to add another layer to our experience of space, an augmented layer of additional information and feedback. The phone becomes an augmented reality gateway, a transactional gateway for tickets and entry to spaces and events.

There are enormous opportunities waiting in our surrounding environments. We note that in Japan the mobile phone has become a credit card platform to access vending machines. Telcos have become credit providers in competition with the banks. They have the great advantage that their access channel is a multi-use platform.

Gaming technology, is faced with a similar challenge. Sony and Microsoft are locked not only in a gaming platform war but also a home control war. Both companies are aware their software could become the basis for a universal home control protocol and that they are educating and priming the users for this potential application through extended exposure to leisure activities. It’s a perfect marketing scenario: game users become home owners and the interface grows with them.

As architects we have been looking at ways to extend the experience of space using mobile phones as ‘wands’ to reconfigure and ‘re-ambience’, giving users greater control and the ability to build personalised experiences in retail and domestic environments. We have been developing these ideas with our clients in Australia.