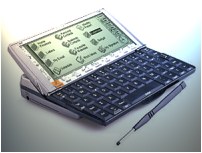 I know several analysts and journalists who still use Psion hand held computers as their primary mobile information device, even though the company stopped making these products 6 years ago. They stick with these large devices, with their slow processors and greyscale screens, because they find them to offer the best way of creating data on the move.

These users belong to a category of ‘data creators,’ whose mobile technology needs are quite different from the mainstream market, but which represent a high-spending and extremely brand-loyal niche. It is difficult to pin down an exact description of the segment, because its constituents are diverse: self-employed consultants, solicitors, doctors, authors and software developers – all of these varied job types are represented.

They are united by a common requirement: the need to create, manage and consume large volumes of data on the move. Anyone with a job which involves a lot of text output and time away from the office – journalists being the obvious example – is a possible member of this category. With work patterns around the world becoming more flexible and macro-economic trends fuelling the growth of knowledge-based businesses, the number of users with these kind of requirements is large and growing.

However, despite ongoing product lines such as the Nokia 9000 series and keyboard-based Windows Mobile palmtops from HTC, this market has been under-served by the mobile industry – hence the die-hard Psion users still clinging to their increasingly dated handhelds. In an industry where most handset users upgrade every 12 to 18 months, it is testament to the lack of suitable replacements that some of the best informed and tech-savvy analysts I know are using pre-2000 products.

There is an argument that many of those who bought Psion, Palm and early Windows CE handhelds now find their needs met combining a lightweight laptop and a high-end smartphone. I suspect many have become Blackberry, Sony Ericsson P9xx, Series 60 and Windows Mobile owners. Some will have focused on the digital camera as their primary function and opted for a 3 megapixel N80, others will have wanted seamless email capabilities and armed themselves with a Blackberry 8800.

My approach currently involves a Siemens sub-notebook with a wireless data card and a Nokia N80. Typically I will carry both during working hours and leave the laptop behind for leisure time. The difficulty I face, and I suspect I’m not alone in this, is my leisure and work times are indistinct and often overlap. If I don’t have my laptop, my actions are limited to browsing emails and web content, capturing photos and sending short messages. I miss having a single device, small enough to slip inside the inner-breast pocket of my jacket, yet equipped with a decent QWERTY keyboard, wide screen and powerful contacts, calendar and office applications I can synchronise with my PC – I miss my Psion Series 5MX, circa 2001.

I am yet to find another mobile device which allows me, for instance, to write lengthy documents in pretty much any location – i.e. small enough that it can be used unobtrusively in a crowded train carriage, yet with a large enough keyboard to allow for extended data entry. Nor have I found a device – other than my laptop – with a screen good enough for accessing the company databases I interact with on a daily basis. 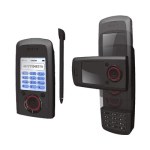 We looked at this user scenario in detail back in December 2004, when PMN collaborated with the industrial design consultancy Alloy to create a handset design entitled ’24/7′. It was part of a wider project intended to stimulate debate in the handset market by showing how products should be designed so every customer feels as if they have been created for them as an individual.

We conducted a wide range of user interviews to identify a broad trend and eventually appointed a single individual from within the ‘power user’ group as our target customer. He was integrated into the design team, working with Alloy’s product developers throughout the process to ensure the final result met his particular requirements.

He was a self-employed consultant, often working from client locations, yet needing to manage several projects throughout the day. He was away from his home base for extended periods of time, often leaving the house early in the morning and not returning until late at night. This meant he would go through several ‘modes’ throughout the day, ranging from a commuter requiring music playback to an always-on email user during his breaks on a client site. His days included business time, when nothing but a full QWERTY keyboard would do, and social time, when a large form-factor device was too cumbersome.

It was a demanding brief and Alloy’s solution was to take a modular approach. By splitting the device into several tightly integrated components, they managed to meet the user’s requirements. Music playback was handled by wireless headphones, which could be housed and charged within the body of the main device. Data entry was facilitated by a QWERTY keyboard and a clamshell design, while the desire for a lightweight device for social occasions was met by allowing a part of the main clamshell to split away as a separate, slimline handset.

There are signs handset manufacturers are starting to look more seriously at the ‘data creator’ category.

Nokia has updated its 9000 series with a next generation device, the E90. In the tradition of the Nokia Communicator range, it offers a mobile phone on the outside of the clamshell and a mobile computer when you open it up. The screen resolution is 800 x 352 and it will include Nokia’s excellent Safari-based web browser, meaning power users will be able to do full web browsing on the device.

HTC, best known as a Windows Mobile manufacturer, has announced two new devices in this category. One is a Windows XP-based sub-notebook with integrated wireless connectivity and the other a Windows Mobile device with a full QWERTY keyboard and 5″ VGA resolution screen.

OQO, a boutique manufacturer from the US, has been selling a Windows XP tablet-style mobile computer for some time. It has a QWERTY keyboard, Bluetooth and Wi-Fi, but only the most recent models come with integrated cellular and those are limited to the US at the moment.

Personally, however, my needs remain unmet. I still feel as if I am making a compromise every time I have to choose between my existing laptop and my smartphone, or any of the other potential solutions currently on the market. The Nokia E90, due for release later this year, comes close to the perfect combination, but it is just slightly too big and the lack of a touchscreen puts me off.

I suspect my ultimate ‘handset’ would, in fact, be a combination of devices seamlessly integrated with each other, much like the 24/7 concept design. I’d love to see a company like Sony, which sells products throughout the consumer electronics spectrum, put together a family of products combining home entertainment, desktop computing and wireless mobility. They would need to be driven by a centralised product design process, ensuring that their exterior styling was as closely integrated as their software: I’m imagining a QWERTY smartphone, desktop terminal and media centre, capable of accessing a personal, centralised server of audio, video and business documents.

I know many of the people who read this newsletter fall into this category of ‘data creators.’ I’d like to hear what handsets or combination of devices you’re using to manage your personal connectivity. I’d also be interested in any visions you have may have for how the industry can better address this need. Please post your replies as comments to the article.