Tablets are prompting a new behaviour, whereby two or more users interact with the same device at the same time. It is happening in a variety of environments, from couples browsing photos together on the sofa to business people interacting over a shared device on the meeting room table. Games are also an obvious area for experimentation, with OLO by London-based agency Sennep illustrating the possibilities.

The implications for designers are significant. The majority of digital interface design, from PC to mobile phone, is built on the assumption of a single user at any one time. Many interface conventions break as this expands beyond two or more users trying to interact with the same device at the same time.

MEX first identified this trend two years ago from user research observations undertaken after the launch of the first iPad. Almost as soon as the iPad appeared in the shops, multiple users could be seen gathered around single devices in cafes and on trains. It subsequently became MEX Pathway #3 at the December 2010 MEX, where Kate Ho of Interface3 led the working team on this subject and delivered an inspirational speaking session (video below):

It was also one of themes of my November 2010 article in User Experience Magazine, entitled ‘Mobile UX trends on the horizon‘.

I was reminded of its prescience while chairing MobileMonday London’s 19th March panel discussion on tablets. It came up in several questions from the audience and points made by the panel, both in the context of simultaneous usage and several ‘owners’ asynchronously sharing a single tablet within a household or office.

Asynchronous usage is a relatively simple concept to design for: it is easy to imagine tablets supporting multiple user profiles, ensuring the device presents each individual with their own set of apps, preferences and content. Indeed, a similar concept – Digitag – from designer Aaron Rustill was voted MEX Innovator of the Year back in 2009, and subsequently featured on TelecomTV.

There are physical considerations: how, for instance, should an interface adapt depending on whether users are sitting side-by-side holding a device between them versus laying the device on a table while sitting opposite each other?

Interaction conventions must be re-thought too. Which user should have priority if there is a conflict between the virtual interaction elements they’re using on-screen? Is it possible to identify which interactions are driven by which user and, if so, how should that be recognised visually within the UI design?

The exploration of MEX Pathway #3 at the December 2010 MEX generated a set of 9 insights into the implications of SMUIs:

Amy Godsell, the MEX illustrator-in-residence for the December 2010 event, also produced this visual summary of the key themes emerging form the Pathway (click for the full size image): 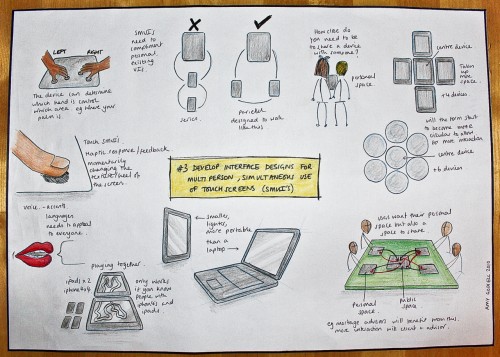 This Pathway is likely to return at a future MEX and I’d love to hear ideas or see concepts from anyone working in this area. Please get in touch.