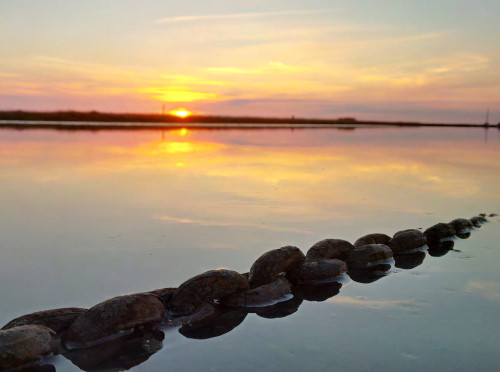 The number of sunsets observed through the digital filter of an iPad is increasing.

From about the second week in July, when British schools start their summer holidays, the waterfront near my house fills with tourists who flock to see one of the few places on the East coast of the UK where the sun sets over the water. There have always been cameras and phones, of course, but this year and last, there has also been a marked increase in the number of people using iPads for photography.

I’m curious as to why this is happening, despite the obvious ergonomic challenges and that it makes you look like a bit of an idiot.

The cliche of holding aloft a giant tablet computer to capture the moment has been with us for some time already – ever since the arrival of a rear facing camera on the iPad 2 – but I’m particularly intrigued as to the user behaviours which prompt it on holiday.

Logic would dictate that a relatively remote, waterside location on a user’s annual summer holiday would be an unlikely place for an iPad (and it is always an iPad – I have never once seen someone doing this with another brand of tablet). It is hardly the most portable camera and there is a risk associated with having an expensive, fragile and non-waterproof device next to the sea. However, the evidence is quite the contrary.

A big part of the answer seems to be children. The iPad is already to-hand because the parents have brought it along on holiday for the kids. This goes a long way towards explaining why they have an expensive, relatively cumbersome digital tool with them despite being at the beach.

In many families, the iPad can almost be seen as the third parent, tasked with entertaining children on car journeys and keeping them occupied in those moments when parents want some time to themselves. The kid in the corner of the restaurant while mum, dad and the other adults try to have a civilised dinner is a common sight, however unwelcome a thought that might be for some.

There is also a clue in the nature of the iPad’s connectivity, or lack thereof. The majority of iPads sold in the UK are Wifi-only models. They can be justified on holiday, unlike your smartphone, which carries the prospect of permanent connectivity to work calls and emails via the cellular network.

The activities enabled by the large screen of the iPad play a role too. I’ve seen plenty of parents reading e-books on their iPad, sitting on the tailgate of their car or on beach chairs, while their kids play in the water. It is also better for maps, allowing a wider view of the unfamiliar area you’re visiting.

Add to that the iPad’s long battery life and suitability for shared photo viewing and the seemingly illogical and impractical act of taking a photo with a tablet becomes rather more understandable.

The iPad becomes a holiday camera because it is easily available, has fewer social compromises than bringing a smartphone and allows the results to be viewed by everyone.

Far from breaking the rules of good user experience, the cliche of photographing a sunset with an iPad should remind us to consider where good design really comes from: empathy and understanding. As a designer, you may belong to a rare breed where the minutiae of camera grip ergonomics and lens quality trump all else, but the iPad sunset experience is a reminder that for most there are other things which take greater precedence: kids, unspoken social conventions and the emotional priorities of feeling like they’re on holiday.