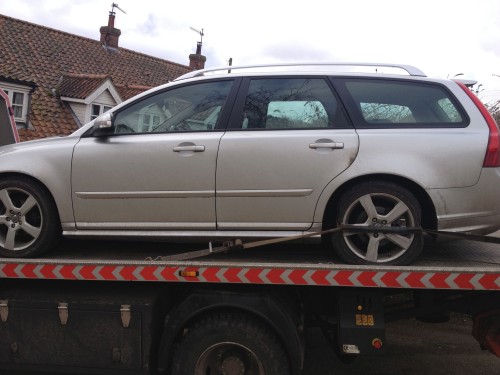 “Love it!” He said it emphatically, telling me he’d been twelve years in the job and still every day was different. “I get to see a lot of Norfolk.”

I asked him which piece of technology he’d never give up, pointing to a dashboard which played host to a TomTom GPS, a three year old, battered Android smartphone and an ageing Nokia candy bar. He didn’t hesitate: “GPS. That’s mine that is, bought it myself.”

Change, however, was coming. “They’re [the company] giving us all one thing. It’ll do the lot: paperwork, GPS – there’s even a camera that’ll record all the time in case I have an accident.” It wasn’t a prospect he was looking forward to. “It’s just another thing to learn. The paperwork don’t even take me much time, like, and I know it.”

From the passenger seat, I saw a world that was more about what technology brought to his ears than to his eyes. He chatted away on his Bluetooth earpiece: dates and places and his colleague’s movements flowing into an audible picture of where he was going, what his next appointment might be and where the other members of the fleet were currently stationed.

I don’t think he needed the GPS for directions at all – he knew every twist of the roads we took – but instead its little estimated time of arrival display was a visual cue informing the more important conversation he was having over the phone.

So many designers who end up tasked with creating digital experiences have traveled a primarily visual training path, yet the audible dimension remains important to many users, by virtue of their job requirements or their preferred usage patterns. Mobile devices are also inherently native citizens of the voice network. Perhaps designers should make greater efforts to equip themselves with as much expertise in the audible dimension as they have in the visual?