Wall Street was already hustling and bustling at 7:30am on the Monday before Thanksgiving. However, amid the desk workers jostling their way into the skyscrapers, a few tourists posed for their photos in front of the New York Stock Exchange. Behind them, positioned between three American flags and beneath six towering Corinthian columns, a lurid yellow banner proclaimed incongruously: ‘NYSE: Add us on Snapchat’.

The juxtapositioning of classical architecture and transient, garish advertising certainly wasn’t preventing the various shutterbugs from taking their selfies in front of the building. Those images, whether taken on a smartphone or compact camera, will preserve this awkward moment in time. It feels like a transition period, when venerable institutions like the New York Stock Exchange wear their populist intentions like politicians attired for one day only in the kit of a local sports team.

The scene was all the more noticeable because it contrasted sharply with the other Snapchat encounters I’ve had while travelling in the US. The night before I was standing in the foyer of a suburban Buffalo Wild Wings, watching an American ritual unfold in the main restaurant: sunday football, fuelled by beer and extraordinary quantities of chicken wings, played out on wall-to-wall TV screens.

As we waited to pick-up our own ludicrous quantity of spiced chicken, a young girl – nine years old at most – skipped into the restaurant. She held her mother’s arm with one hand and with the other she swiped across the screen of her iPhone 7. Holding it up in front of her face, the girl used Snapchat to capture an image of Sunday Funday in full swing.

I watched as she flipped through various built-in filters at lightening speed, superimposing weather, time and date. Eventually she settled on a geotagged filter provided by Buffalo Wild Wings marketing department. 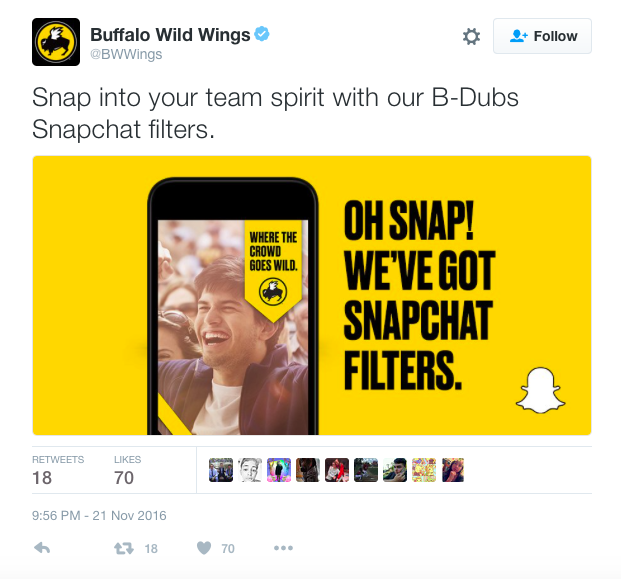 Wild Wings is one of numerous restaurants and retailers employing Snapchat’s advertising formats to connect with customers. They range from location-based filters to custom digital lenses. According to Snap’s internal data, the app reaches 41 percent of America’s 18 to 34 year olds each day. Location filters, like this one provided by Buffalo Wild Wings, are seen by 40 to 60 percent of those daily Snapchatters.  Early this year, a design agency ran its entire recruiting campaign through Snapchat.

A third example speaks to the diverse ways Snap is establishing itself as the platform for augmented visual communication and creativity.

Every morning for the past several months, a mother of two has shared a short video with her friends and family, showing the cute, snoozy reactions of her toddler waking up. It is quick, imperfect video which resonates because it means something special to a small, private audience. She rarely uses any of the filters or overlays Snapchat is becoming known for: in this instance, Snapchat works because it is simply a fast, scalable way to share video with a group.

Snap’s recent clarification of how it sees itself is reflected in these three different user stories. “Snap, Inc. is a camera company,” is the definitive statement on its homepage. It talks about a mission of ‘reinventing the camera’ to ‘improve the way people live and communicate’.

This is becoming a classic story of a tightly focused app broadening into a platform. Known initially for its distinguishing feature of temporary, self-destructing photos, Snap is iterating quickly based on the creative ways in which its users are pushing the boundaries of each version. Thus far, it has managed to maintain close correlation between user behaviours and the addition of new features.

The real test is about to begin as it starts to add new creative tools to the fledgling platform, in the form of experimental products like Spectacles (something I wrote about previously). These represent sufficiently large leaps as to require a different form of user research, looking beyond gradual iteration to speculative bets on how little clues in existing user behaviour might blossom into unexpectedly appealing new product offerings.