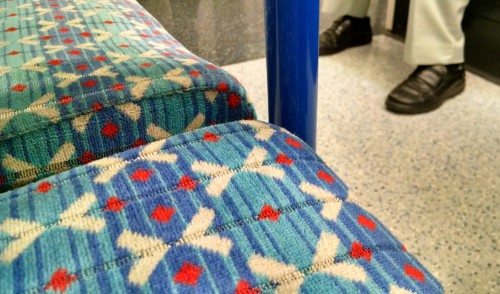 She seemed surrounded by a bubble of quiet calm. All around her the frantic motions of a London Underground carriage jolted to and fro, but time slowed as it passed through her small part of it.

A paper journal was open on her knees, wrapped in a brown suede cover, with heavy cream pages. In one hand she held a sketcher’s pen and in the other, a large feather from – I think – a goose. She had her eyes closed at first, holding the feather just in front of her. When she opened them again, she made a few notes in her journal. The layout of the text on the page suggested poetry rather than prose was the goal of her meditation. Again, she closed her eyes, considered the feather in her hand and wrote some more.

I would guess she was in her early 50s. She had dark hair and was fashionably and expensively dressed. At her feet was a carrier bag bearing the embossed logo of a high end boutique and a large, red leather handbag.

She seemed immune to the infectious pace and anxious movements of the others who swiped and tapped at a mixture of smartphones and tablets. Opposite her sat a lady with an LG tablet in a bright pink case, hurriedly panning around a map and then snapping the cover closed when the train pulled in to her station. Several men were standing in the aisle, one repeatedly checking the screen of his Samsung Galaxy, each time tapping out the digits of his pin code. Another gazed at the lock screen of his HTC One, pushing his fingertip over the surface of the display with seemingly no real goal in mind. It glowed in response, but gave him nothing new.

The lady with the feather stood out on this crowded carriage because she was creating while others were consuming. The nature of her analogue tools was such that they provided a passive canvas for her thoughts. The expectation inherent in a glowing screen was absent from her paper pages – they merely waited, quietly, demanding nothing of her, but ready to record her thoughts as and when they arrived.

Each user is unique, of course. Indeed, that is the goal of this MEX occasional series: to record the behaviour of individuals in their own worlds and speculate as to their wider meaning. However, as distinctive as the lady and her feather were, she is also not alone.

I observe every day how the technology in our hands seems to up the pace of life and to throw fuel on the fire of the frantic. Similarly, digital interactions seem heavily weighted towards consumption rather than creativity. This particular user left me wondering whether digital tools could ever replicate or, indeed, enhance the kind of creative moment she found herself in? If so, what blend of physical materials, digital interactions and software intelligence might achieve it? The answer eludes me so far, but I suspect if is to be found, it lies beyond the screens which held captive all those others sharing the carriage with the lady and her feather.