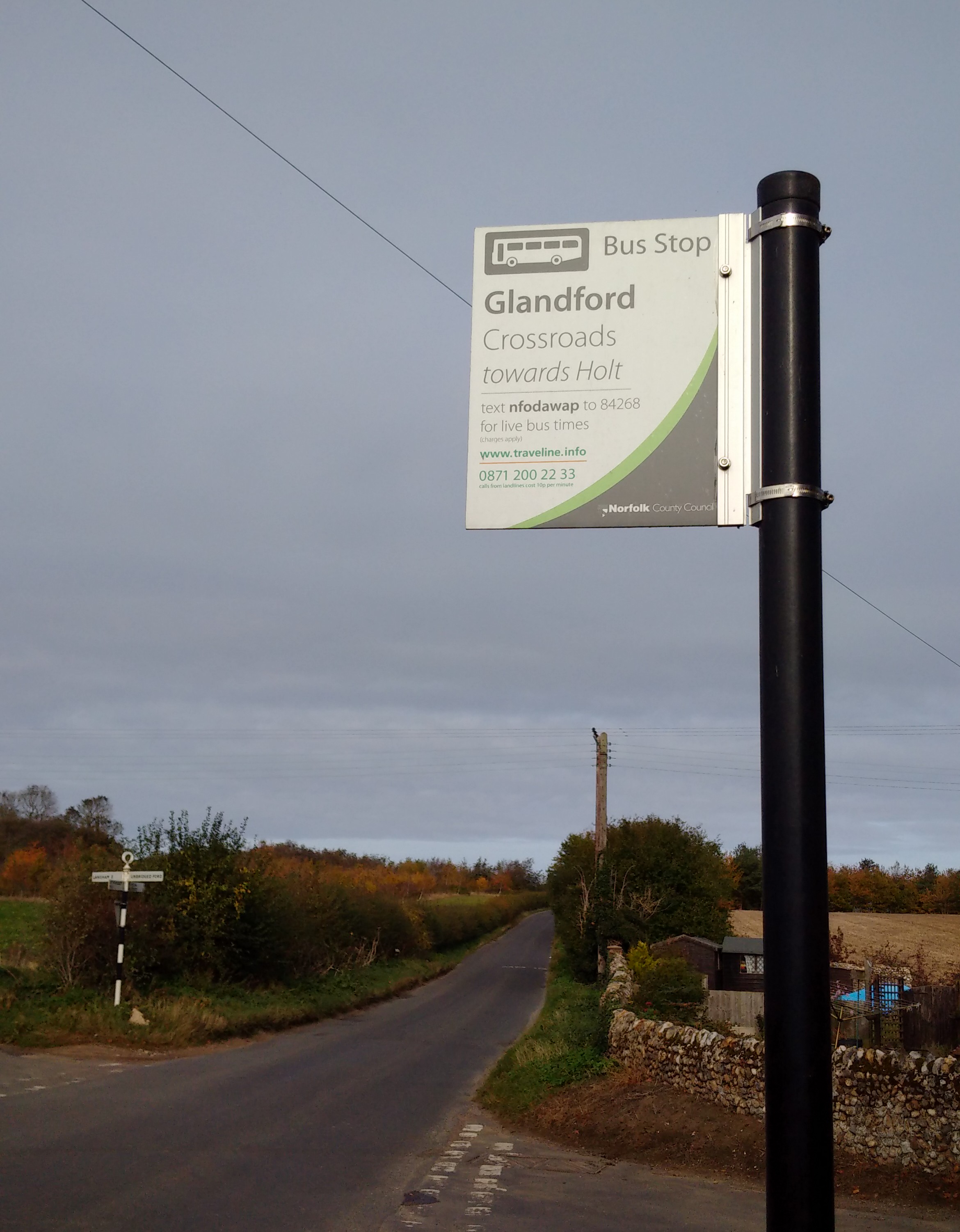 The bus goes once in the morning and once in the evening, winding its way through the country lanes to the local market town. From there, you walk across the square, past the War Memorial, and pick up the connecting bus for another hour’s journey to the nearest city. Most of the passengers travel on ‘Freedom Passes’, the cards given to people in the UK when they reach retirement age, enabling them to travel on the buses for free. That’s the demographic around here.

It was one of the first autumnal mornings of the year, chilly but dry.

Two ladies – one in her late 70s, the other perhaps 50 – stood waiting outside the bus shelter.

The conversation circled around this question several times, with the older lady grumbling about the cost of her TV service in various ways, but always coming back to the central issue that it was only the sports programmes she wanted.

“40 pound is a lot,” the other repeated a few more times. It seemed she knew her well enough to be talking about price, but not so well that she felt able to share what she really thought: the older lady was probably being ripped off or had been sold such a complex package of TV content that she hadn’t realised she was paying for much more than she wanted.

The older lady was adamant though. She pulled the headscarf tighter around her chin, looked away into the distance for the approach of the bus and stated definitively: “That’s it. All I got is the sports. They want the money for the aerial and the box.” She clearly was not a happy customer.

Her companion, seeing her mind was made up, tried a different approach and offered a more positive slant on it: “Of course, it’s good though for the winter, isn’t it? You’ve got all your programmes, even the foreign ones. Then come the summer, when you don’t need it so much, you can cancel.”

This piqued my interest. With digital subscription payments growing in popularity with both consumers and the companies which recognise the value of a predictable, ‘sticky’ revenue stream, understanding the nuances of what governs users’ subscription behaviour is becoming important. Here we were, in a rural community, with customers you’d expect to be among the least digitally savvy, and yet they were talking about the ins and outs of subscription management behaviours most companies currently associate with younger, digital natives.

Subscription surfing, where customers jump from service to service to take advantage of the best deals, often for relatively short time periods, is becoming more noticeable. It’s getting easier too, not least because to sell more subscriptions, companies are relaxing the length of tie-in periods, allowing content portability and offering better ‘free’ service tiers in the hope that if a customer cancels, they at least remain a user, and therefore more likely to subscribe again in the future.

In addition to surfing between trial periods on different services, say from Spotify to Rdio or Amazon TV to Netflix, some customers are also recognising they can pause subscriptions seasonally or when money is tight. Hence this middle-aged lady, standing at a rural bus stop, recommending her elderly companion cancel her sports TV package in the summer and start it up again when the long nights set in.

“Oh yes!” the older lady agreed. She already knew all about that, it seemed, and despite being sold a convoluted package of channels she didn’t need, she was very aware that come the warmer months of summer, she’d be on the phone and cutting off that company’s revenue stream until she wanted ‘her sports’ again.

The conversation then took an unexpected turn. TV wasn’t the only form of digital entertainment in the British countryside – gaming, apparently, was also on the radar for this pensioner.

“Well, my daughter said to me the other day: ‘Why don’t you play your games?’ And I said to her, ‘Well I forgotten I even had the games’ and she says ‘you need one of those tablets’ but I’ve got my Gameboy and I certainly don’t need no tablet!'”

They were still talking about the merits of tablets, particularly their suitability as photo viewers, when the bus arrived in the market town. They went their separate ways, in pursuit of a rather different form of consumption, among the greengrocers, butchers and fishmongers which line the high street. These are the kind of shops where you’re still more likely to pay cash to a business which has been there for generations, than tap a contactless payment to a big brand.