There’s an established design pattern for sailing cruisers: an open cockpit to the rear and an enclosed cabin to the front.

The first thing which strikes one about the Dufour T7 is that it doesn’t conform. Instead of centralising the accommodation in a single forward cabin, it has two – one of which is unusually located to the rear of the cockpit. 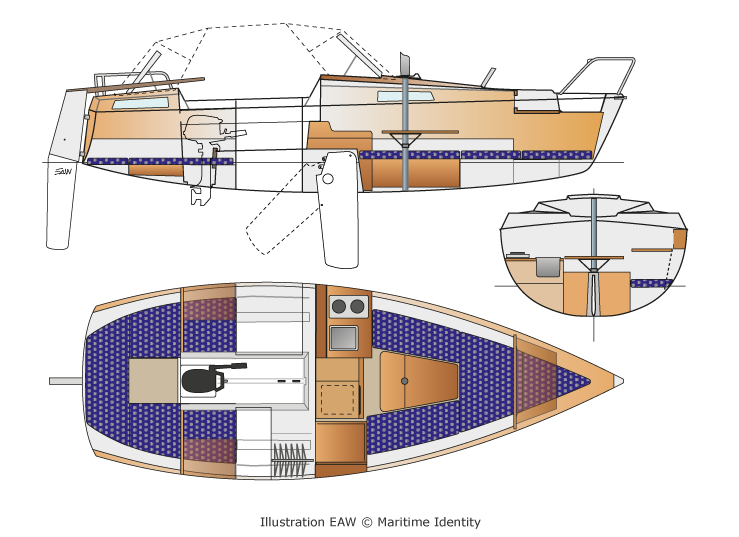 At about 22ft, it is not a large boat to accommodate 4 people sleeping on-board, but by separating the sleeping areas between the small, self-contained aft cabin and a larger main cabin (also containing the galley and bathroom facilities) it achieves differentiation: parents and children, or two couples sharing the boat, can have their own sleeping spaces.

Apparently it is rare boat, made in small numbers during the 1980s, but what little I’ve read about it online suggests it is fondly remembered for this innovative layout.

Long-time MEX conspirator Andrew Muir Wood wrote his thesis on dominant design patterns, examining the emergence of the ‘smartphone slate’ as one of his examples, alongside bikes, beards and dresses. He has spoken and written about it for MEX on several occasions, such as this essay entitled ‘100 years of slate-itude‘.

There’s a reason these patterns become established. Currently, for most people, most of the time, the slate-style smartphone represents the best set of compromises. This can have a positive effect. For instance, manufacturers can focus their efforts on other aspects more important to users, including reducing the price, improving software and honing components such as the camera. However, there’s a potential negative if manufacturers stop questioning whether the dominant form factor remains appropriate to changing user needs and experimentation stagnates.

In an ideal world, manufacturers would use the economies of scale which result from dominant design patterns to their advantage and continue to pursue market-challenging experiments. The standardisation around the slate design has driven down the cost of the most expensive components – such as screens and memory – so a smart manufacturer, in theory, can still keep production costs low if they are able to employ existing materials in a more imaginative way.

This is where early stage, user-centred design, with its potential to create new value, can have a true multiplier effect.

p.s. this week’s inspiration occurred on a morning walk, when I spotted a rare Dufour T7 lying at a local boat yard: yours for £5950, complete with engine, road trailer, mooring and tender 🙂