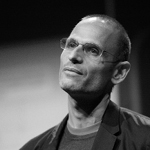 
Robert Fabricant leads Frog’s efforts to expand it’s creative offerings into new markets and disciplines. Robert has been with Frog since 2001 and has worked since then in a broad range of initiatives that span product design, interaction design, environments, service design and branded experiences. Prior to this, Robert led the Research & Development team at Organic and worked as a designer and creative director at @radicalmedia, Microsoft Research and Edwin Schlossberg Inc. He is an adjunct professor at NYU’s Interactive Telecommunications Program and the School of Visual Arts.


At MEX he’ll be responding to Manifesto statement no. 6, entitled ‘The next billion customers are already here’. Robert will be sharing his experiences from Frog’s involvement in an AIDS awareness project in Southern Africa which made extensive use of mobile technology. He’ll be joined by Sian Townsend of Google and Haslina Dawam of Celcom Malaysia for a series of inspiring stories about innovation in emerging markets.


We asked Robert to sum himself up in the space of a 160 characters SMS message and this is what he said: “I am Robert Fabricant, leading a multidisciplinary creative team in New York and I’m inspired by the positive social impact of mobile technology.”

Why did we chose them as a speaker?

Robert led Frog’s recent project to drive the user experience of an AIDS awareness campaign in South Africa, making extensive use of mobile technology to succeed. In addition to his leadership work at Frog Design, one of the best known and longest established user interface agencies, Robert brings a keen understanding of customer lifestyles and the passion to translate that knowledge into great product experiences.