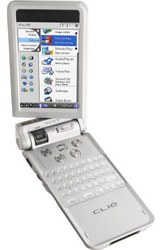 The new handhelds run on 200 Mhz ARM processors and feature 16 Mb of RAM. There is also a Memory Stick slot and a new proprietary wireless expansion slot for a Sony 802.11b card. Both devices can record and playback digital audio in ADPCM, ATRAC and MP3 format.

The NX70V features a digital video camera for capturing moving and still images. Sony quotes 60 minutes video record time using a 128 Mb memory stick and MPEG-4 compression, while still photos can be taken at resolutions up to 640 x 480. The imaging features will be supported by Sony’s web-based photo sharing services.

The handhelds will ship with a range of software applications, including office applications, a universal remote control, web browser and polyphonic alarm system. The NX60 is priced at USD 499 and the NX70V costs USD 599.

Microsoft and its Pocket PC OEMs will now be hard pushed to convince users they are getting extra functionality for their higher price tags. Sony’s NX series sets a new benchmark for high-end PDAs, offering industy-leading screen resolution, software functionality and connectivity.

The new support for ARM processors in OS 5 means that Palm OS manufacturers can now add the multimedia features that were an important unique selling point of Pocket PC devices. Sony is marketing the NX series squarely at the high-end consumer segment, but its range of Vaio laptops has demonstrated this can also appeal to corporates, especially in creative and consulting businesses.

Sony’s ability to create truly innovative and desireable consumer products is yet another reason why Palm must focus on the mid-range business market. The NX series, however impressive, certainly does not represent the extent of Sony’s OS 5 ambitions – within a year, it will have sleek, multimedia handhelds selling around the USD 300 mark.