In this article Jessica Ching, Laura Henneberry and Shally Lee share the findings of a collaborative project between the Ontario College of Art and Design (OCAD) and Canadian network operator TELUS.

Touch is a vital human need and a deeply emotional form of communication. When we physically interact with people or things we enjoy, we connect with them and react to them. They can make us feel warm, calm, playful or excited. The physical sensation of using a mobile phone, however, is missing these emotional and physical reactions. When we think about other objects, we can clearly imagine the feeling of sensual underwear, luxurious cars or high performance runners. In contrast, using a mobile phone is a bit like pressing your face into a remote control.

Currently, mobile phone experience design is predominantly focused on software interface, not on the user’s physical interaction with the phone. Consequently, digital interaction design has outpaced physical interaction design, and touch is only really addressed through surface finishes and haptic feedback. Haptics in touchscreens and touchpads stimulate one’s sense of touch, but are mainly used for functional feedback purposes and can only provide a generic vibration through the entire phone. Surface materials used for most devices such as polyurethane, plastic, or painted plastic are cold and hard to the human body.

Some handset manufacturers have addressed the sense of touch, such as the soft touch paint finishes introduced by the Motorola PEBL and the use of leather, wood and metal in Vertu. These efforts though are starting points and exploration has not extended much beyond this.

When challenged to design a new mobile phone for the Canadian carrier TELUS, as part of the TELUS-OCAD Mobile Phone Project, we were intrigued by this disconnect. How could we use textures, contours and materials to design a phone that feels soothing, or impossible to put down? If a phone could interact with a user in human ways – like holding someone’s hand, or giving them a hug, or whispering to them – what would it look and feel like? Our concept was to enhance tactile interactions to establish a user’s emotional bond to their phone itself, whilst enhancing their experience communicating with another person.

Redirecting our thinking from our heads to our hands, we began to touch EVERYTHING. Would the perfect phone be smooth and cool like hand blown glass? Or soft like fur? Does a bumpy surface feel more satisfying in one’s hand, or something with a subtle concave curve?

We collected small mountains of various materials like fabric, beads, wood, clay and foam to turn our ideas into a mishmash of model phones, each representing a different tactile experience. A Victoria Secret bra was even reluctantly cut up and fashioned into a prototype that would be as soft and sensual as lingerie. When we asked friends and colleagues to test our models by touching them to their hands and faces, they often became so enthralled with the textures and materials that we literally had to rip them from their hands to get them back. 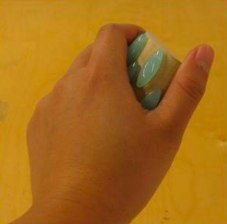 We soon found our designs engaging the sense of touch and eliciting emotional reactions, but found them constraining when applied in the context of mobile phones. Simple textures like beads glued to wood were highly addictive to rub, but overall shapes that were easy to handle when rubbing ended up being squat and ill-fitting for calling. Materials like fabric felt soothing on the face, yet a harder plastic or wood felt more reliable when held. A phone with more weight felt more secure than a light one and an inset screen created an encompassing acoustic feeling around the ear like a sea shell. 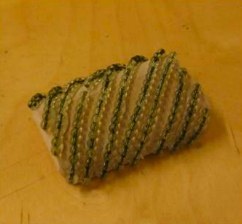 We were surprised to discover that a phone enhanced through tactility could not only create emotions, but could also be used to calm existing emotions. When a person is holding a phone in their hands for a long period of time, waiting for a call, they might squeeze it tightly out of anxiety. If the sides of the phone were squishy, could it relieve stress like a foam ball? When a person is nervous, bored or distracted, they might unconsciously fiddle with their phones in their hands or on a table. Could there be a point of interest with which the person could fiddle?

Considering our investigations and discoveries, we picked three ideas from the array of concepts we had generated and developed them into one package, which we named ‘Embrace’. 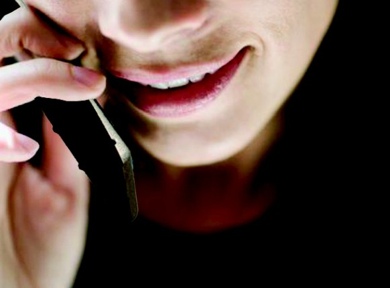 On the front, Embrace has a soft, continuous, surface made of the electro conductive fabric, ElekTec, with embedded buttons. We wanted the experience of answering a call to be welcoming, like putting your face to a pillow, rather than a remote control. A comfortable interface between phone and ear would free the user to lose themselves in their conversation, rather than being distracted by a tender ear. To maximize the pillow effect and to minimize plastic-to-face contact, the screen of the phone is also slightly inset below the fabric surface. For cleaning, the front can be easily removed and washed. 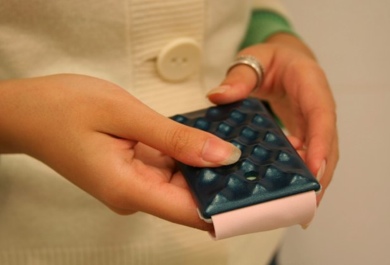 Inspired by the fidgeting behavior we discovered, we incorporated a molded plastic textured surface with wavy contours on the back of the phone, which would create an element of interest, play or comfort when handled. The sensation of rubbing these contours against one’s hand, as discovered in our experiments, was very soothing and addictive. Moreover, different texture variations could produce different effects. A second texture could hit reflexology points when pressed against a hand, or a third texture could be coupled with a simple vibration motor to provide a stimulating massaging effect. 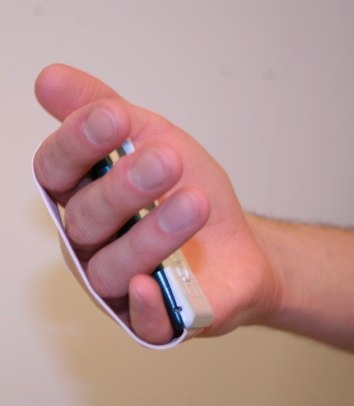 The handle looped around Embrace was designed to mimic the feeling of holding someone’s hand. When stretched around one’s hand, the soft elastic band invokes a feeling of comfort and security, removing the need to hold a phone tightly when talking, walking or even running. It can be flipped to cover the front and serve as a screen protector, especially when placed in a pocket or purse. To further connect a user to their Embrace phone, the handle would be available in several colour and pattern options, allowing for personalization and individuality. Like the pillowed surface, the handle would also be detachable and machine-washable, so that each style could be cleaned and swapped. 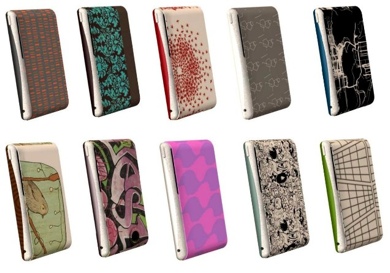 The value of touch

Through this project, we came to realize how very simple changes to texture, material or shape could produce very different, more satisfying experiences. A mobile phone does not need to be radically different. It only needs to consider how significant touch can be for a user.

Consider the analogy of car design to mobile phone design. The element of touch has long been seen as a valuable asset to the driving experience. Although in-chair vibrations, soft leather seats, wood dashboards and smooth gear shifts do not technically help a driver, it reinforces the pleasurable experience of driving. Digital dashboard interfaces and GPS systems are welcome additions, but cannot induce the same emotional reactions as a physical experience. Since most people spend as much or more time on the phone than they do driving, their physical experience on the phone is definitely worth some thought.

And of course, more often than not, what works for users also works for business. The idea of emotional and sensory branding has been widely discussed for some time, and a mobile handset is a prime product for its application. In most retail stores, customers get a feel for phones through non-functioning dummy devices with a short description of features. What if one of the phones they picked up felt so nice they couldn’t put it back down? The power of touch could certainly be a competitive differentiator.

The research and solutions that we designed into Embrace are by no means conclusive. Rather, they are just starting points for a deeper exploration into how tactility could create a better mobile experience.