HP has announced it will discontinue development of all its WebOS devices (such as the Pre and TouchPad) and seek ‘strategic alternatives’ for the platform. The move comes about a year after HP paid USD 1.2 billion to acquire Palm, developer of WebOS, and stated its intentions to use the platform as a key component of its multi-touchpoint digital strategy. 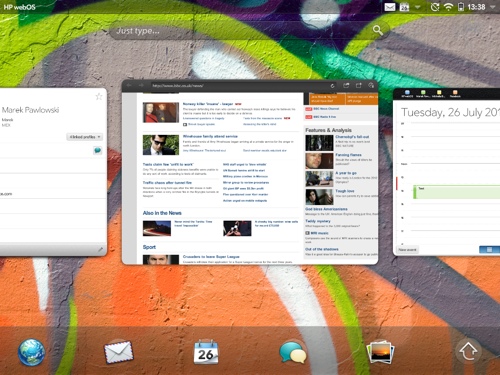 The user experience of the WebOS software platform was excellent, with more naturally intuitive user interface metaphors than iOS, RIM, Symbian, Android or Windows Phone. It was also built around web technologies for easy application development and embedded support for multi-touchpoint experiences at the heart of the OS. Some of its pioneering features included ‘touch-to-share’ to exchange information between the TouchPad tablet and Pre handset and the Synergy technology for tying together contacts on multiple social networks such as Facebook, Google and LinkedIn.

However, despite customers’ positive response to the software user experience, sales of WebOS devices were undermined by consistently poor quality hardware and slow time-to-market. The recently launched TouchPad (see my review here) has seen sales well below expectations, while the Pre handset has only just started to trickle into commercial channels months after its announcement.

There was little incentive for developers to build applications for a platform with a relatively small installed base and the range of third party software available is tiny in comparison to iOS and Android.

HP’s decision to refocus its business away from building personal computers is logical. In the most recent quarter, HP’s personal systems group had the lowest operating margins of any of its divisions (5.9 percent). There is little chance of those margins improving in the near future. Indeed, the business would require increased investment to navigate the strategic shift away from traditional PC sales and into touch-based mobile devices and home entertainment appliances. HP would be fighting on 3 fronts: against consumer sentiment to maintain its legacy PC lines, against a surging Apple in tablets, phones and home entertainment, and against competitors in Asia with lower fixed costs.

The path to success would have meant a multi-year commitment to establishing a complete eco-system around the WebOS platform and no guarantee the long-term margins would be any higher than they are today.

Instead, HP is making a strategic bet on the opportunity to become a leader in the smart information management layer addressed by Autonomy. As users’ digital experiences start to spread across multiple touchpoints, the ability to understand the context of information and surface the most relevant parts at any time is going to be critical. We’ve been looking at this for some time and HP’s focus on this area is entirely understandable and a good fit for the rest of its solutions business.

The result is that WebOS, a platform which I believe has a good enough user experience to succeed as the interface for multi-touchpoint digital experiences, is now essentially up for sale to highest bidder (indeed, HP has probably been shopping it around in private for some time). There are a few possible scenarios:

1. Spin-out – a management group backed by private investors could purchase WebOS, the Palm brand, patents and technical team. The original team behind Palm – Jeff Hawkins, Donna Dubinsky and Ed Colligan – might be interested. They’ve exited and rejoined the business previously when setting up and later selling Handspring. The investors would need exceptionally deep pockets to build up the business as an independent device vendor.

2. Trade acquisition – there is strategic rationale to HTC, LG, Samsung, Sony and – possibly – RIM, buying WebOS and putting it at the heart of their multi-touchpoint strategy. I believe HTC and Sony would be the most likely to succeed in this endeavour. Both have the device manufacturing experience to dramatically improve the hardware quality of WebOS devices and both could benefit from having their own platform eco-system as a hedge against Android. There is also the question of whether one of these acquirers may be interested in buying out the whole of HP’s personal systems group, including the legacy PC unit?

3. Assets – patents are hot property in the mobile industry and one of the motivations behind Google’s recent acquisition of Motorola. The likes of Microsoft, Google, Nokia, RIM and Apple may be interested in cherry-picking the patent assets out of the WebOS group.

4. Closure – a company publicly announcing it is exploring ‘strategic alternatives’ for one of its divisions is usually a sure sign private talks have reached a dead end. It may be there simply aren’t any players out there willing to risk the investment required to establish WebOS as a viable competitor to Android, iOS and Windows Phone.

As someone who would like to see WebOS flourish on a range of digital devices and bring good experiences to customers around the world, my recommendation would be a sale to HTC, Sony or Samsung.