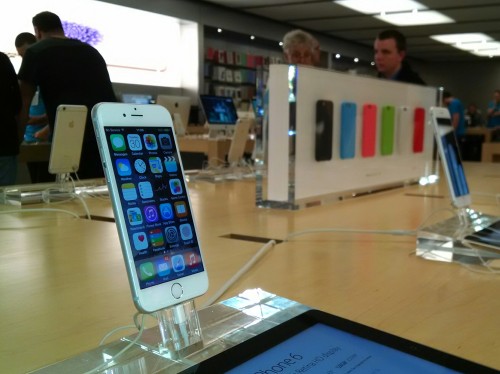 First things first: don’t believe what you’ve read, whether it is positive or negative. Go to an Apple Store and spend some time with iPhone 6 and 6 Plus yourself. It’s the only way to form an opinion and it is best do it a few weeks after the launch hype has settled.

Here’s my view, and what I observed in others during an hour at an Apple Store in a provincial city in the UK:

They’re not too big, they’re not too iterative and the people milling around them with covetous eyes aren’t bothered about bending, hashtags or so-called Twitter firestorms. These phenomena are internet hubris – a small, monoculture of a world – which amplifies nonsense into temporary, obsessive peaks.

Out in the real world, Apple’s new devices are being treated as objects of beauty which have furthered its distinctive legacy of mobile device design: providing products which, for the majority of people, still represent the best set of compromises for their money, just like every iPhone since the 3GS. All products entail compromise – there’s no such thing as the perfect device for everyone – but in addition to sitting in the largest sweet spot framed by those compromises, Apple’s new iPhones are also embellished with little pieces of universally recognisable excellence to ensure they appeal to the heart as well as the head.

The materials, build quality, lightness and thinness are immediately noticeable. Apple’s retail stores allow the company to trade on these characteristics by giving customers the chance to experience them properly. It is a winning formula.

Take one example: the warm-to-the-touch, smooth aluminium construction. It is a compelling tactile experience. Or the way the screen flows in a gentle curve down the sides of the device. Others have done this, of course, but Apple’s strategy is to use scale and mass market appeal to convey the value of these design touches to big audiences.

I was concerned they would be too big, but they’re just not. Apple has employed a combination of factors to cheat physics, particularly on the larger 6 Plus. The lightness and thinness mean the device is easily shifted in your palm, allowing for small adjustments of balance when you need to reach an area of the screen your fingers can’t stretch to from your current position.

There’s also the ‘Reachability’ gesture, which shifts the whole screen canvas downwards, bringing the title bar controls within range of small hands. I’ve heard plenty of criticism of this feature, but in practice it works well. User experience designers decrying Apple’s simplistic UI mechanics would do well to remember practicality is a form of elegance in itself. Crucially, consider how much time is lost to cognitive latency – the delay of thinking about what you need to do before you actually start doing it – and whether Reachability’s easy-to-memorise double tap is preferable to a more nuanced gesture.

The smaller 6 remains suited to one-handed operation, something I feared would be lost. Again, the little design tweaks are what makes it possible for Apple to defy what one might expect from reading the specifications on paper.

Both devices feel like a significant step forward, despite the design cues they carry over from previous generations. I suspect even owners of the newer 5S will want to upgrade, although many will hesitate because of the expense. Those with a 5 or earlier, of which they are hundreds of millions around the world, will be more easily persuaded.

After my time with the new iPhones and watching and listening to others interacting with them, I find myself pondering a few questions: