This article by Marek Pawlowski, founder of MEX, is part of an ongoing series exploring each of the 15 MEX Manifesto statements at the heart of the 7th international MEX User Experience Conference in London on 19th / 20th May 2010.

MEX Manifesto statement No. 4: “We believe latency is the enemy of usability and must be eliminated before new interface technologies become suitable for the mass market.”

This. Is. Why. Latency. Matters.

Imagine trying to hold a conversation where every word was followed by a pause, as if it were contained within its own sentence. This is the reality of some of today’s user interfaces, where the delay between user action and device response causes tremendous frustration.

Just a fraction of a second’s delay can make the difference between good and bad user experience. The quarter of a second pause which occurs between a user dragging their finger across the display and updating the screen visuals can cause an experience to become unusable.

This is a growing problem in mobile for two reasons.

Firstly, devices are transitioning from indirect (e.g. keypads and hardware navigation buttons) to direct (e.g. touchscreens) manipulation methods. Our finger tips are an incredibly sensitive area of the body and, when we touch something, we expect is to respond instantly. In contrast, indirect manipulation methods create a disconnect between the finger and the eye, allowing for a brief pause without causing too much perceived latency.

Secondly, we are interacting with ever richer forms of content on mobile devices, from photo collections to 3D games. We are also using more advanced and complex interface transitions. The more pixels we try to draw on the screen and the faster we try to draw them, the more processing power is required and the more likely it is the user experience will start to ‘lag’.

Staffan Lincoln, an expert on UI latency issues in at TAT, cites an interesting analogy for these kind of interface experiences. “Imagine biting into an apple and the sensations being separated – first you’d have the crunch and then a pause, then you’d get the taste, followed by another pause, and finally you’d have the juice.”

Lincoln has produced a short video on this issue, where he talks about the importance of frame rates in moving to a world of ‘solid’ UIs, where lag is imperceptible. Click the screenshot below to view it. 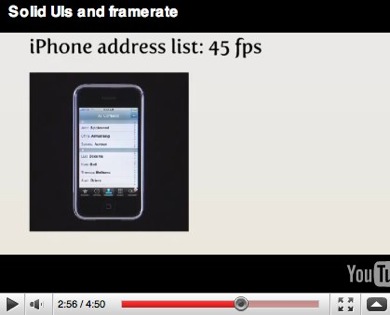 Latency occurs at two points during user interactions. Firstly, the device must accurately track the user’s input. The Wii controller, for instance, scans user movement around 100 times a second – this is fast enough that it can detect really fine nuances in human gestures. Television, for instance, is only refreshed 50 times per second, so the Wii is something of a benchmark in terms of its ability to interpret human actions.

The second part of latency occurs when the device itself tries to issue a response to the user’s input. This is where advanced graphics capabilities become important and why so many chipset manufacturers are now getting serious about supporting enhanced mobile user experiences which take advantage of their 3D processors. Simply put, the graphics processor has to draw everything which occurs on screen, so if you’re trying to move a photo from one area of the screen to another and want to show that photo as it is being dragged, the processor has re-draw the image for every step of the movement. For the motion to appear smooth, you need some serious processing power.

TAT’s Lincoln suggests several methods you can use to avoid the perception of latency in these scenarios. For instance, instead of showing the actual photo when it is being moved across the screen, you could just show an empty frame of the same size, reducing the number of pixels which need to be redrawn.

Feedback, such as vibrations and audible cues, can also play a role, confirming in the user’s mind that an action has occurred before the visuals themselves have had time to update.

Whatever methods you use, the message to device manufacturers, operating system designers and developers is clear: latency creates bad user experiences. It is better to avoid the temptation of utilising the latest graphical effects and rich media capabilities if it leads to interfaces which appear to lag. The result will be frustrated users and poor brand perception for your experience.

Aim for a world where mobile user experience is legato rather than staccato.

Some follow-up points for discussion (I’d love to hear from you by email, Twitter or by posting a comment on the blog below):

This article by Marek Pawlowski, founder of MEX, is part of an ongoing series exploring each of the 15 MEX Manifesto statements at the heart of the 7th international MEX User Experience Conference in London on 19th / 20th May 2010. Further information and conference registrations are available for GBP 1499 on the MEX web-site at http://pmn.co.uk/mex/.