It started like any average Thursday: I responded to a few messages and checked on project progress in our MEX Basecamp.  It was when I opened my Google calendar to review the rest of the day that things got a little weird. 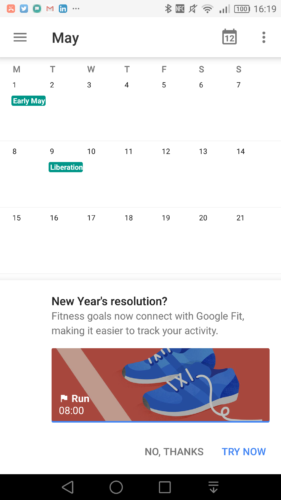 “News Year’s resolution?” Google asked me.  There was no small talk.  Google seemed to think I needed some self improvement and it got straight to the point.

Immediately I was curious: not because I was especially in search of a resolution (indeed, I am steadfast in my curmudgeonly resistance to waiting for arbitrary dates to start worthwhile endeavours), but because I’m not accustomed to my calendar suggesting appointments to me.  Surely it is supposed to be the other way around: the humans decide the activity and the calendars remember and schedule them?  I’m sure it has always been done that way.

Google, it seems, had other ideas and I took the bait. 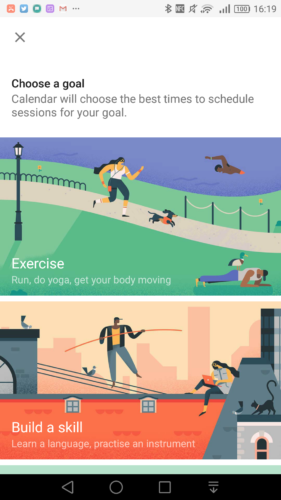 First I was asked to choose my goal and shown a selection of illustrated panels to tempt me: more exercise, building a skill etc…  I happen to be relatively content with my activity levels, so I opted to learn a new skill.  Google gave me options: I could learn a language, learn to code, practice an instrument or create art.  I would even have been permitted to enter a choice all of my own under the ‘Custom…’ category. 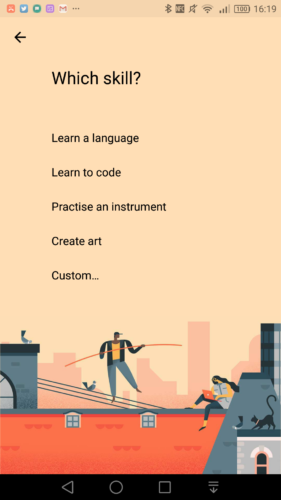 I couldn’t help wondering though, given everything Google is doing with artificial intelligence, were these same options offered to everyone, or where they chosen just for me, based on what Google thinks it knows?

I went for art.  It seemed fittingly grandiose to imagine 2017 will be the year my scratchy stick people finally evolve into something more…Da Vincian. 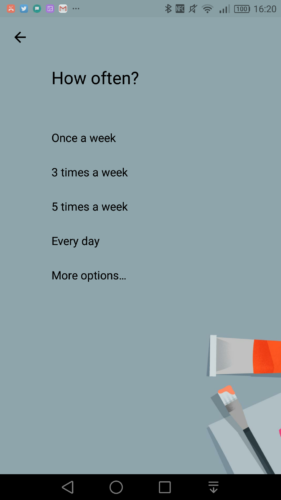 I wanted Google to take me seriously – to realise my dedication to making great art – but 7 days a week seemed a little excessive.  I opted for 5 instead.  However, Google wanted me to be more precise: exactly how long would I spend on my art on each of these 5 days?  I went for the maximum, 2 hours, on the basis that most people, I’m sure, are in the same situation of having at least 2 hours a day they’ve been struggling to occupy! 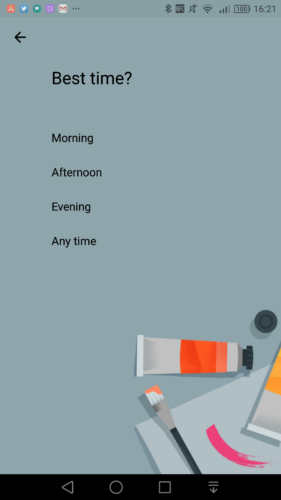 Given that Google was being so pro-active in managing my programme of self improvement, I left it up to the app to decide when I would find these 2 hours each day.  Those who are less comfortable with such a laissez-faire attitude could ask Google to stick to ‘morning’, ‘afternoon’ or ‘evening’ depending on their preference. 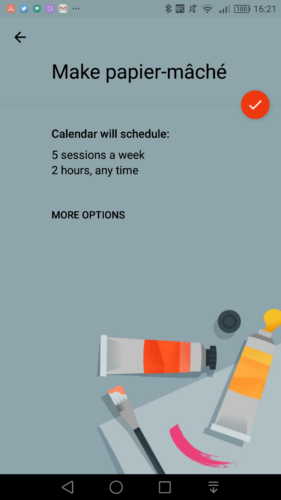 Last of all, Google offered me a range of specific artistic endeavours to choose from.  It was with great delight I noticed one of the options was papier mâché.  There seemed no better way to conclude this conversation with Google’s ambition marshals than agreeing to henceforth spend 5 days a week, 7pm to 9pm, making models from soggy paper.

So it is that every weekday, just as afternoon drifts into evening, I am now reminded by Google’s Android notification system that it is time to begin my new hobby.  Later, it invites me to confirm with a tap on the chirpy ‘Did it’ button or give in to procrastination and postpone my self improvement with a dejected swipe of the ‘Later’ button.  There’s even an artful pie chart to track how many days out of the 5 I manage to hit my goal each week. 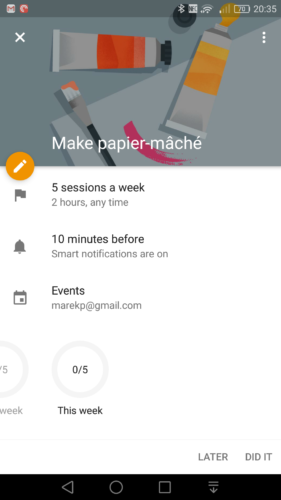 Experience design is entering a new phase, where artificial intelligence and habitual use of digital devices combine to create hitherto impossible opportunities for one-to-one interactions between brands and consumers.  There will be temptation for companies to experiment at every stage.  For all my teasing of Google’s over-zealous self-improvement kick, I am largely in favour of such experimentation.

However, I fear in this instance Google failed to apply one simple rule which would have revealed the flaw in its endeavour: is the system it designed, however clever it may seem in the labs, capable of producing a ridiculous outcome?

Regardless of whether you dress your project as ‘designing for behaviour change’, ‘gamification’, ‘machine learning’ or ‘contextual activity tracking’, there should always be someone on the team willing to put up their hand and ask whether the users will really, on a whim, commit to 2 hours of papier mâché, 5 days a week, just because their calendar app suggested it.