Ideas are the currency of all agencies, from user experience to graphic design. The efficiency with which an agency creates, applies and delivers those ideas to clients is what differentiates it from its competitors. An agency may invoice for an hourly rate or completion of a project or the use of facilities, but these are just ways of abstracting this core capability into billable units for the client.

However, too often I find agencies failing to nurture the cycle of idea creation, development, preservation and re-use. This cycle establishes a virtuous loop which encourages employee development, raises the quality of client work, fosters a distinctive brand for the agency, wins better projects and improves staff retention.

It starts by recognising the value of ideas is unlocked when they find a use. That use does not always have to be client work to be beneficial to the agency. It might instead be a mix of events, publishing or even in-house product ventures, which rank as outputs alongside client projects and serve to improve idea creation.

Crucially, a loop must be established to ensure knowledge generated by exploring ideas in these new channels flows back into the agency’s overall engine of creativity, where it can be applied to future, paid client work.

The concept is best illustrated with a practical example: 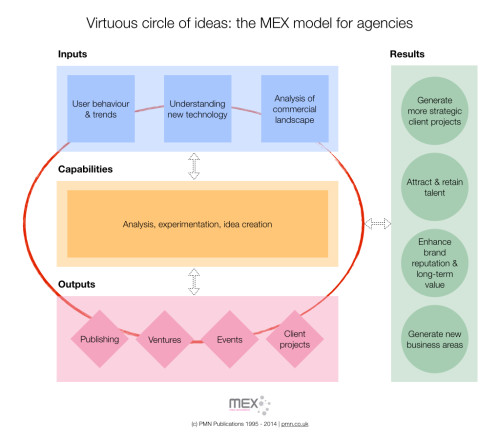 My work with the MEX initiative has given me the opportunity to see how agencies all over the world structure themselves and, while most pay lip service to these concepts, only a few implement them successfully. The reasons vary, but usually it is because agencies don’t recognise that establishing such a loop requires:

As part of the research for this article I discussed the concept with founders and senior management from some of the agencies I admire, many of whom are also alumni of our MEX events.

Tom Wood, co-founder and partner at Foolproof, a user experience agency of about 80 people in the UK and Singapore, said: “If the only thing an agency makes and shares is ‘the work’ I think it is the sign of an unhealthy culture. Over time that is likely to make creative people feel stifled and lead to creativity only along very narrow tramlines.”

Outside of Foolproof’s work for high profile clients like Google, the global bank HSBC and airline Easyjet, it also invests in its own research. This has seen the company sending a team to Seoul, Korea to develop its understanding of contactless transactions, driven not by a specific client brief but to generate internal insights and research it could share publicly. “If we only did research on the things our clients pay us for, we’d have a lop-sided view of the world,” Wood continues. “We understand we have to be creative in all sorts of ways in all sorts of domains.”

Peter Merholz, one of the co-founders of pioneering UX agency Adaptive Path, told me: “One of the things which brought the Adaptive Path founders together was that we had a shared sense of purpose around putting our ideas out into the world. Being aggressive in sharing our ideas afforded a few things: higher consulting rates, because we were clearly ‘thought leaders’; new revenue streams from events; and the ability to recruit talent, as designers would be attracted to our ideas and recognise that by joining Adaptive Path, they’d have a platform for sharing their own.”

Merholz has moved on from his former role as Adaptive Path’s CEO, but remains involved with the firm. Founded in 2001, Adaptive Path has become known not just for the quality of its client work, but for the books published by its team (including ‘Subject to change’, a personal favourite of mine) and its conferences such as UX Week.

However, Merholz also sounded a note of caution on how successful an agency can be in trying to artificially stimulate the growth of ideas. “There was a period where we expended real effort to encourage ‘idea development’, going so far as to have a person dedicated to helping others in the practice mature their ideas. We moved away from that because, we learned, you can bring a horse to water, but you can’t make them drink.” Instead, Merholz believes agencies should look for these qualities in those that they hire, rather than hoping they can grow them.

Mark Rolston, who spent nearly a decade as Chief Creative Officer for frog Design, one of the world’s largest and best known design firms, was also quick to point out that ideas need to be combined with an understanding of breakthrough technologies and access to capital to result in new product experiences. He talked of how during his time at frog Design he was able to amplify the impact of talented designers, often from relative geographic backwaters, by exposing them to project opportunities they wouldn’t otherwise have seen.

“It must start with talent, but talent alone isn’t a fix,” Rolston said. “Great ideas help the best teams stand out from the crowd – it’s a calling card, especially today – but in my experience there is far more of this quality going around than the ability to secure capital and leverage or create emerging technology.” He continued: “Your discussion of idea nurturing is well stated: ideas should be central to an agency’s value. However, talent isn’t a pure measure of the person. It’s a mix of their own capability along with a reflection of what opportunities they are given.”

Rolston recently founded his own UX agency, Argodesign, specialising in the virtual sphere and the unseen elements which increasingly define product experiences.

Some agencies are actively supporting employees in gaining access to the capital and opportunities which can help an idea grow into a real product. Artefact, a Seattle-based agency whose work ranges from re-imagining camera design with start-up Lytro to projects for blue chip clients like Intel, has an internal incubator it calls ‘Startefact’. Lada Gorlenko, User Experience Director at Artefact, explained: “It’s not just a platform for getting the ideas out. The entire company votes for the top ideas and they are funded by the company’s time and money. If someone is committed to such a project, they are given client-free time to work on it.”

Artefact is realistic that not all of these will make it as commercial products, but sees other advantages: “We invest in these projects because they bring a wide range of benefits: some of them could turn into successful products, others help develop employees’ skills, thought leadership and professional recognition. It also has a huge and very special value – the feeling that Artefact is a special place to work because it supports all the creativity of its employees, not only the kind that is paid for by our clients.”

This, of course, has to be balanced with client commitments, and Artefact is meticulous about preserving the integrity of client’s intellectual property, but Gorlenko believes most clients understand the extra value of working with an agency capable of nurturing its own ideas.

Whether you’re running the agency or joining as a graduate for the first time, here are a few questions you can ask yourself to evaluate how close it is to achieving the virtuous loop described:

From its outset in 1995, the goal of the MEX initiative has been to enhance digital user experiences. Agencies, with their key role in defining future products, are central to this effort. I work with agencies large and small to evolve their approaches and welcome anyone to join this ongoing conversation about the most effective models.