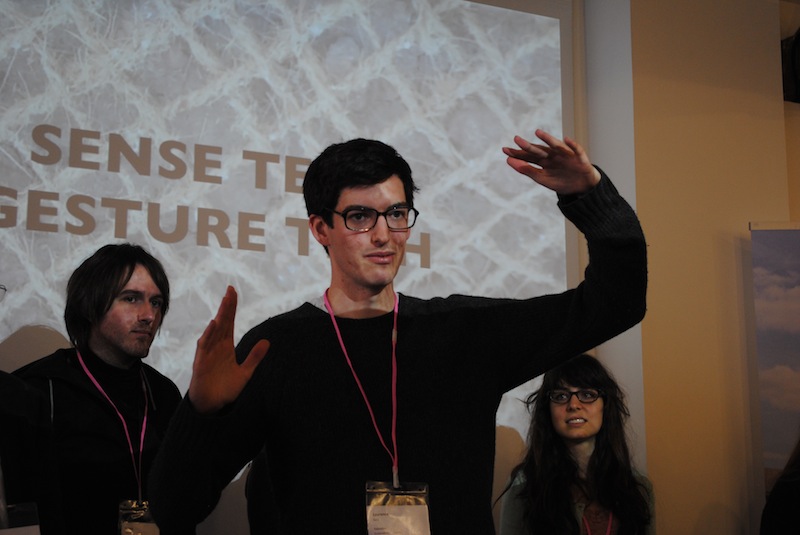 Mobile as the new old

For me, this was the first MEX where ‘mobile’ – understood as a device alone – started to feel traditional and old. From the outset in 2005, the heart of the MEX community has always been in the mobile technology industry, but it feels like we’re evolving to a new understanding of digital experiences, where to constrain them within a single class of device – mobile phones – would exclude a much wider set of possibilities. 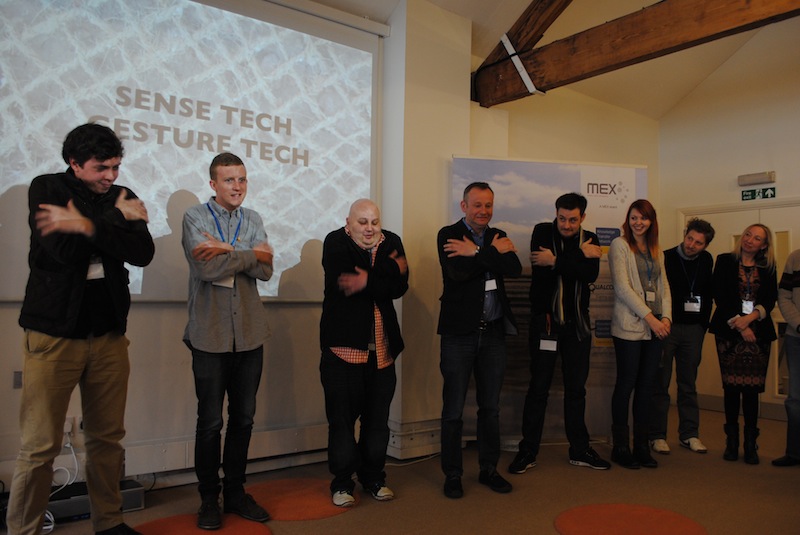 Ghislaine Boddington of body>data>space challenged why our interface with the digital world should be limited to the tiny fraction of skin on our fingertips and asked us to instead consider the whole body as an interaction canvas. It left me wondering what new types of experience might become possible when they are controlled, and able to respond, through the entire body?

For all the unease it created, it was impossible to ignore Google Glass. It was referenced by almost every MEX speaker. It was telling, however, that even at an event as close to the cutting edge of technology as MEX, participants were skeptical of Glass’ ability to succeed outside niche bubbles where looking like a cyborg is acceptable. Perhaps Oli Shaw of Fluxx and Lennart Andersson of Veryday came closest to accurately predicting Google Glass’ near future by identifying scenarios where the social context already permits headwear, such as industrial work environments and sporting activities? 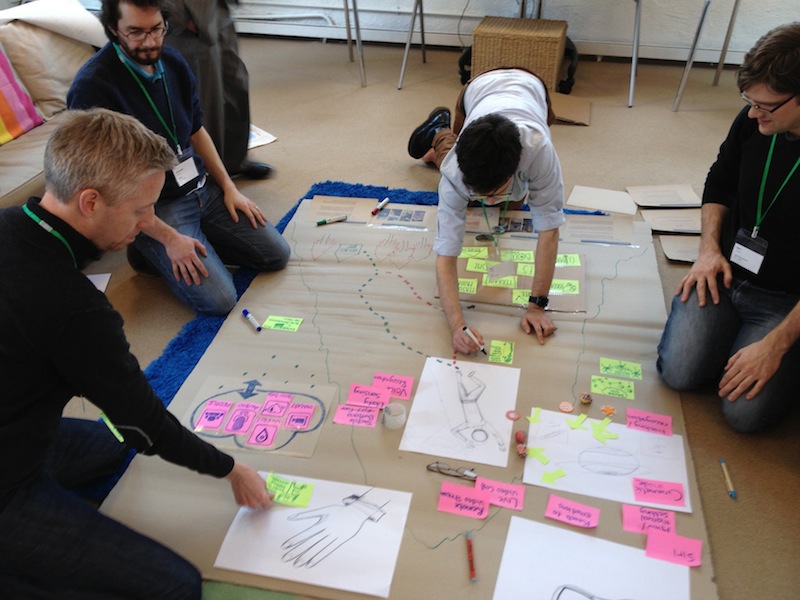 Who has forgotten the user in user experience?

Surrounded by the wonders of technology, it is easy to forget that interpreting human behavioural nuances is the starting point of successful user experience. The stories shared by Lee Duddell of WhatUsersDo, Melody Quintana of Facebook, Dr Leo Poll of Akendi and Priya Prakash of Design for Social Change were a powerful reminder of two things. Firstly, the rapidly expanding UX industry has a ‘dirty secret’: most UX projects are actually conducted without the benefit of anything but the most basic user research. Secondly, there is a rich seam of insight waiting to be tapped by those who widen user research beyond a single team, employ more than one methodology and never stop thinking of new ways to get closer to really understanding behaviour. 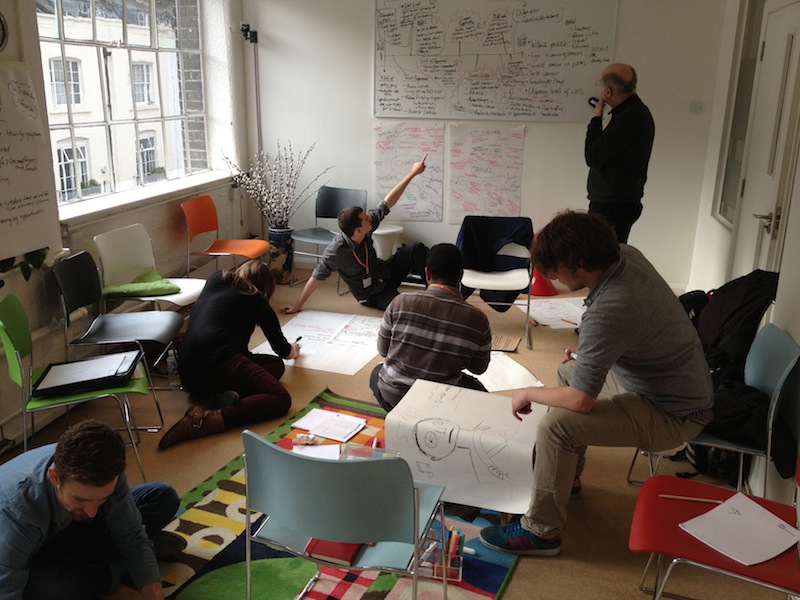 I’m glad we were able to initiate a new Pathway – #17 Insight – to improve user research. The Pathway team, facilitated by Lee Duddell, made tangible progress. Their suggestion of combining quantitative and qualitative testing results into a single timeline, accessible to and meaningful for everyone from designers to senior management, felt like a realistic and achievable new approach. Combined with new channels for user feedback, their proposal addressed both parts of the challenge: creating new ways of understanding users and presenting results in a way which resulted in better design decisions. 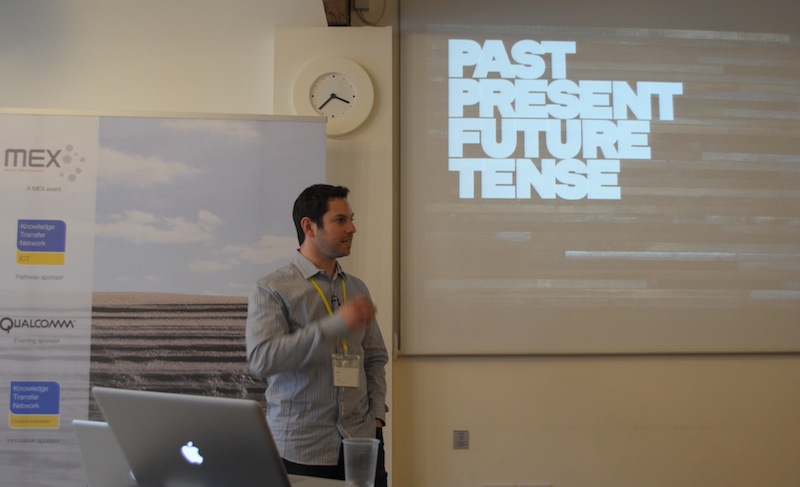 Better user research and using it to make better decisions is fundamental to improving digital experiences. It is only going to get more complex as services expand across multiple touchpoints, and – as Simon Judge identified – require the combined skills of more designers and developers than ever. Today’s user research methods are inadequate and under-utilised. Any progress which can be made in this area will be an enabler for advances in many others. It should be first priority. 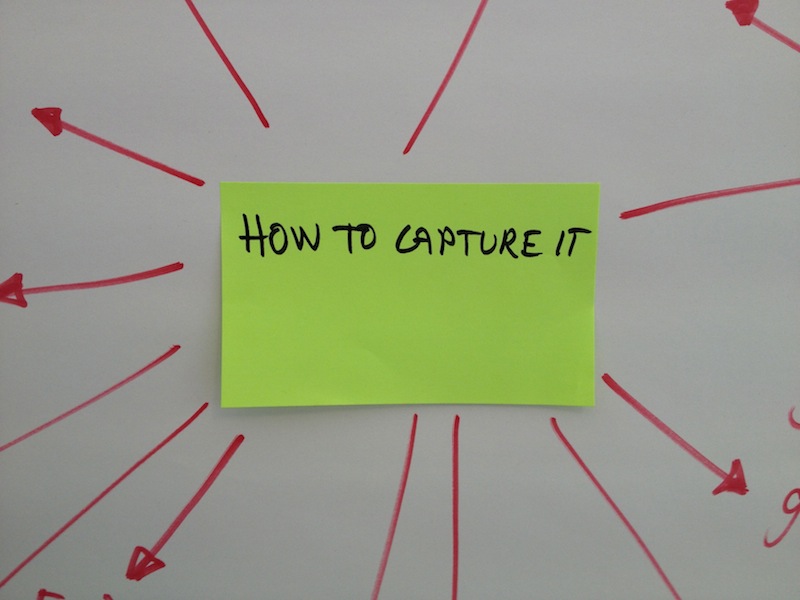 Looked at in aggregate, there seemed to be a polarisation of the digital experiences discussed at MEX. Some, such as Yuli Levtov’s Reactify, Ghislaine Boddington’s installations and Paul Bennun‘s and Nicky Birch’s Papa Sangre were designed as immersive activities in themselves. Others, like Victor Szilagyi’s ideas of automotive mobility transforming into a service, were clearly intended as utilities. 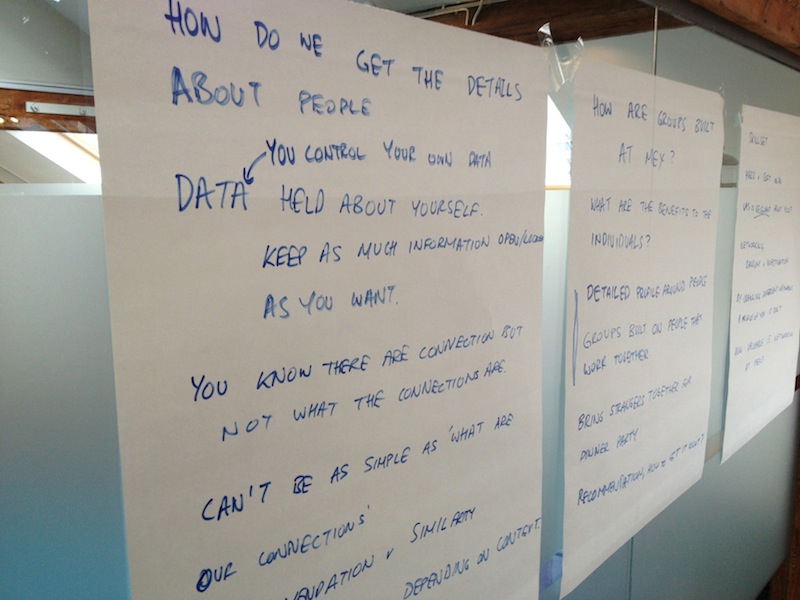 There is no shame in recognising an experience for what it is: a background activity, something users simply want to get done. Sometimes the best you can aim for is to make it as forgettable as possible for the user. There is unlikely to ever be a moment of magic in, say, the mundane activity of paying a bill. Indeed, trying to make something more memorable than a user wants is often a recipe for unwanted complexity. Context aware techniques, discussed by several speakers, including Jon Mann of Artefact, showed how new levels of convenience could be delivered through every day technology. 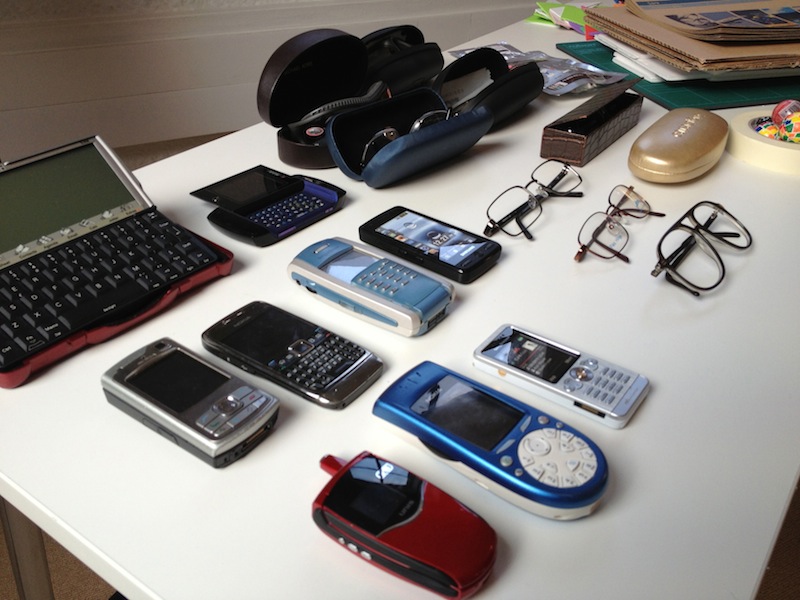 However, there were also inspiring examples at MEX which showed a class of experience neither utility or video game, but something more. These were creative endeavours which extend our senses of touch, sight and sound, imbuing users with an ability to edit their world through digital means. 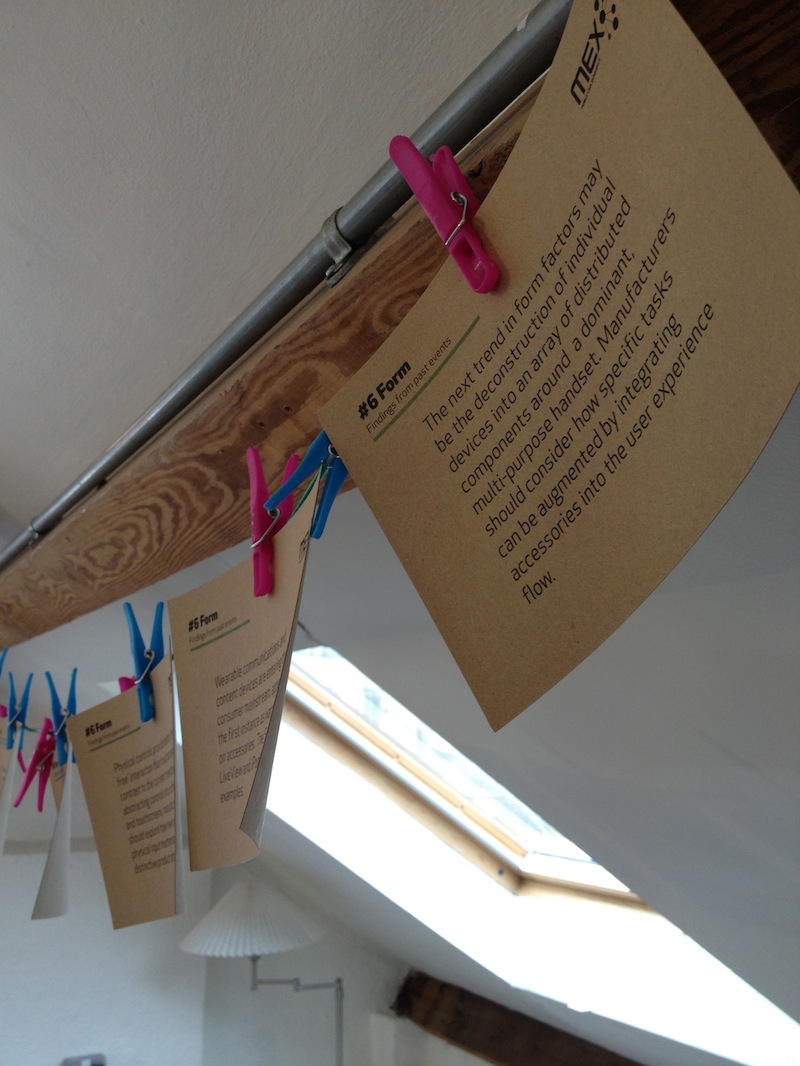 If the first generation of mobile technology has allowed users to consume digital content and annotate what they see through a viewfinder, the next looks set to turn what we see, hear and feel into a creative canvas we can adjust through digital means. Jon Mann raised the idea of technology providing ‘super powers’ and this doesn’t feel far off. 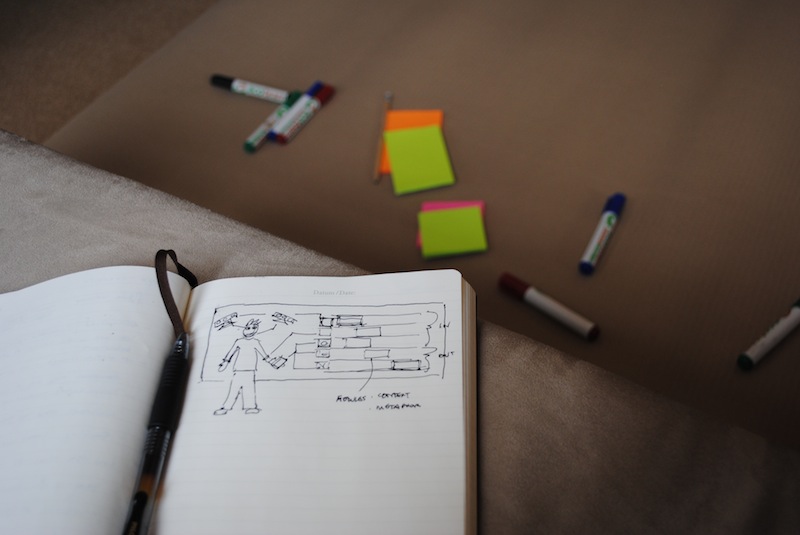 ‘Mobile’ as a term is evolving in itself. It was telling that the group on form factor innovation, facilitated by Lennart Andersson, found themselves exploring companion devices capable of independent movement and reporting back on journeys of their own without being tethered to the pocket or human hand. 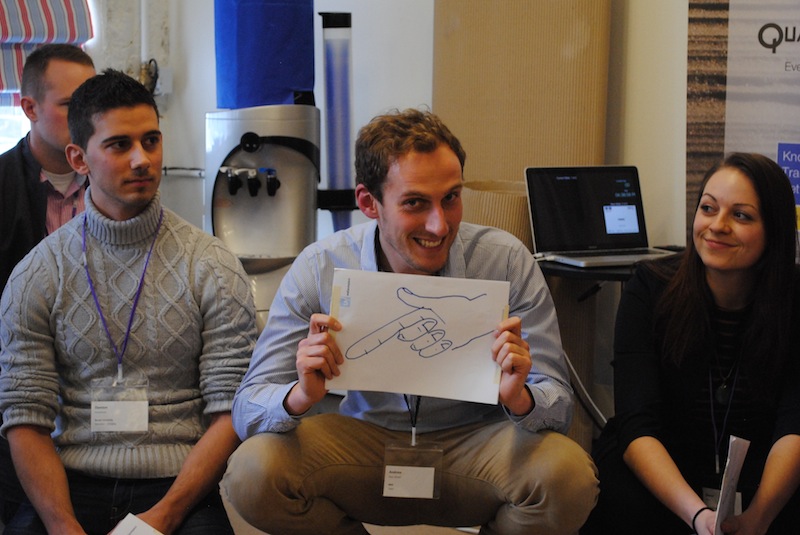 The working session on Diffusion, facilitated by Alex Guest and Sam Dunne, came away from 4 intense hours of creation with an experience that used just a single mobile screen – every other digital element (and there were many) was embedded into the fabric of their user’s life. 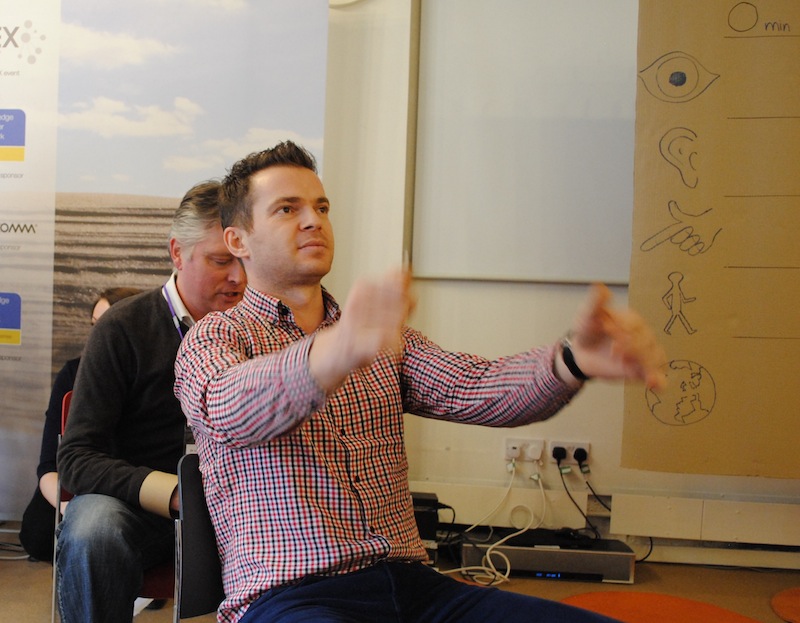 Craft skills for a digital age

Alexandra Deschamps-Sonsino of Designswarm showed that mobile devices don’t need screens to deliver meaningful, even emotionally charged, digital experiences. The detailed tooling and seamless connectivity of her Good Night Lamps highlighted an important point: finessed, beautiful experiences are created through a craftperson’s knowledge of materials, be they digital or otherwise. 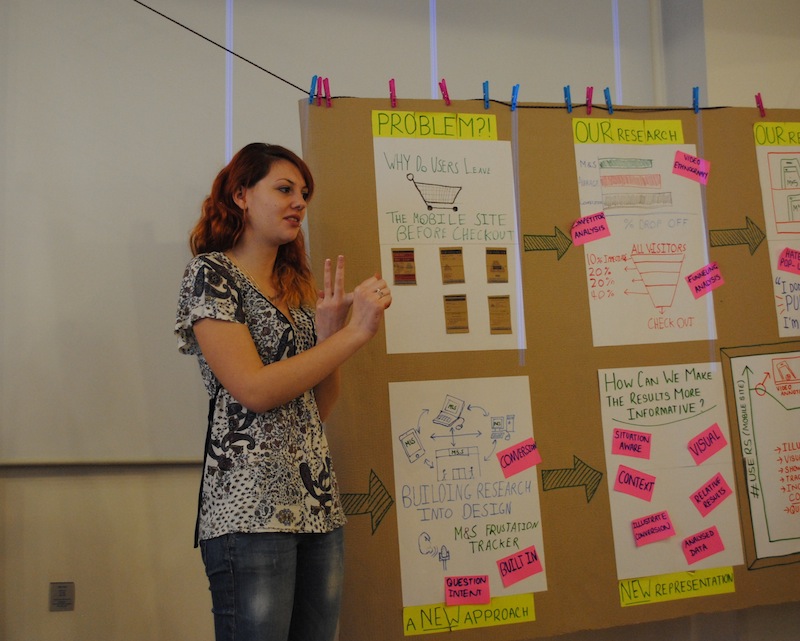 The rise of the senses

Perhaps this was the strongest impression of all I took away from MEX? The assumption that digital design will be forever dominated by screens seems to be changing. Indeed, on the evidence of two days at MEX, it is not hard to imagine a time when visual elements will be a relatively minor part of a design practitioner’s day and a new toolkit of skills will be needed: skills that are today found in the world of audio, electronics, sculpture, live performance, fashion and art.

The next MEX is on 24th – 25th September 2013. Tickets are available today. There are also opportunities for speakers and sponsors.

Thank you to those involved in the ongoing efforts before, during and after the event: the participants, speakers, facilitators and Brunel team. Also, to our sponsors ICTKTN, CIKTN and Qualcomm for having the vision to support this endeavour.

Thanks to Alex Vissaridis for the photos (and MEX booklet). 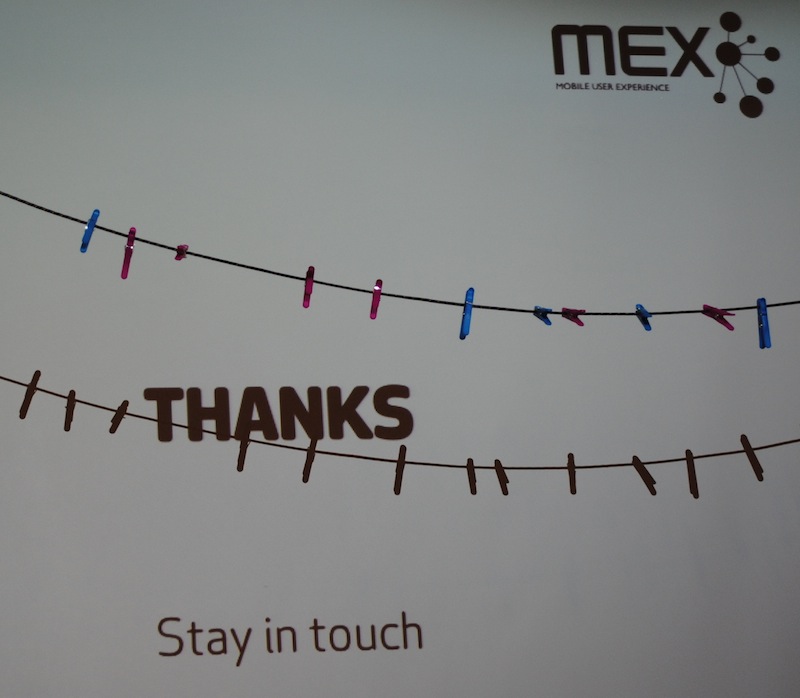