Adobe is releasing an SDK to link the creative powers of iOS, Android and Blackberry Tablet devices with its desktop photo tools. The software enables developers to utilise the touchscreens and other sensors on the mobile devices to add new creative capabilities to Adobe’s widely used digital imaging applications. 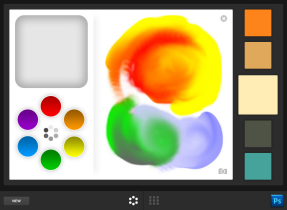 Adobe itself has created 3 example applications, including Color Lava (above), which turns the screen of the mobile device into a representation of paint mixing palette, allowing artists working in desktop Photoshop to mix colours with their fingers.

Additional applications include Eazel – allowing users to paint with their fingers – and Nav, which makes the Photoshop tool icons available separately on the screen of the touch device.

This touches on 2 of the Pathway areas in focus at MEX in London on 4th/5th May 2011, including Pathway #8 (‘Inspire new forms of creative expression through mobile devices’) and Pathway #2 (‘Research the implications of multiple displays and inputs within a single experience’).