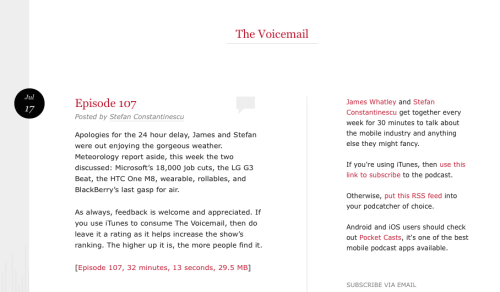 The last three years of smartphone progress can be described in one sentence: faster processors driving bigger screens with more pixels. For users, there is little real world functional difference between today’s flagship products and 2011 devices such as the iPhone 4S and Samsung Galaxy SII.

There have been incremental improvements across the board, but I struggle to pinpoint anything significant enough to be described as a generational leap forward. For comparison, consider the mass move from physical buttons to touchscreens prompted by the 2007 launch of the iPhone. Looking further back, Nokia’s 2002 launch of the 7650 camera phone heralded the rapid transition from phones designed primarily for the ear to devices designed for the eye.

Would the average, non-geek user with a device from 2011 really feel they are missing a major new ability or experience compared to owning a 2014 device?

With smartphone development slowing to the incremental, I have found myself wondering whether the next set of meaningful changes to the way users interact with the digital world will be delivered in a different form factor altogether?

I asked James Whatley and Stefan Constaninescu to answer this question on their podcast, The Voicemail and they were kind enough to reply in episode 107. I was interested in their views because, as a regular listener of their show, I know they both have a keen eye for separating hype from developments which matter to real users. As a result, they deliver a succinct 30 minute recap of industry news each week and are often accurate in spotting meaningful developments.

You can download the podcast episode and listen to their reply here from 23 mins 50 seconds in.

(I’d also recommend listening to the whole thing, and subscribing for future episodes too.)

Stefan said he would find it hard to predict three years into the future, not least because expected leaps forward in processing power could enable many new things. However, he also pointed to ‘Her’, the film about a man’s relationship with a computer as a vision of what may be possible.

James talked about the significance of wearables, looking beyond today’s implementations in wristwatches, and instead discussing the overall concept of moving notifications and interactions away from the screen of a smartphone. He speculated on what might happen as flexible electronics enable rollable displays.

Both answers seemed to point to experiences enabled by innovations beyond the smartphone itself. For instance, the virtual assistant in the film ‘Her’ is made possible by a combination of sensors and intelligence residing on banks of servers. The wearables James described are intermediaries between the user and their digital ecosystem, of which the smartphone is a part, but not necessarily much different from how we know it today.

I broadly agree this is the likely trajectory, with incrementally better smartphones remaining a significant and probably the dominant touchpoint in users lives, but the most meaningful new functional changes being driven by the introduction of new touchpoints, from wearable sensors to remote displays.

Much of this will already be familiar to the MEX community, as designing digital experiences which span and thrive in this multi-touchpoint world has been a big part of our conversation at the MEX events for several years. There’s a wealth of resource on this site exploring the topic.

However, if we focus specifically on the smartphone form factor alone, here are some common sense suggestions for experiences significant enough to differentiate products in the eyes of real customers. None of these are groundbreaking concepts, but in an industry where competitive response has overtaken common sense as the guiding light for product roadmaps, consider this a timely reminder of what matters to users:

So, now it’s over to you: what else could make a difference to the future of smartphones? Innovation may be shifting to new categories, like wearables, but these devices we used to call mobile phones aren’t disappearing any time soon and I’m intrigued to know what would make a difference to the phone you’ll be carrying in your pocket in 2017. Please post your comment below.