There is a theatrical air of the imagined future about Lenovo’s Yoga Book.

On the one hand, its hinge is reminiscent of traditional book binding. On the other, it possesses an intricacy you might expect to find in some alien spacecraft buried in the desert for thousands of years. Seriously, I kept catching myself admiring the gnurling on the 54 little metal cogs which enable it to perform its magical unfolding trick. There’s real craftsmanship here.

The hinge allows the Yoga Book to function as transformer device, folding through 360 degrees. Somehow, it never feels flimsy during opening or when set at most angles, with the exception of a slight ‘bounce’ when touching the screen in laptop mode.

Once open, the lower half is a deep black, with the faintest ghost of an outline suggesting something else may lie hidden beneath. When the keyboard illuminates, it appears to be almost projected onto the surface from above. Visually, there really isn’t anything else like this at the time of writing (May 2017). It creates a striking effect. 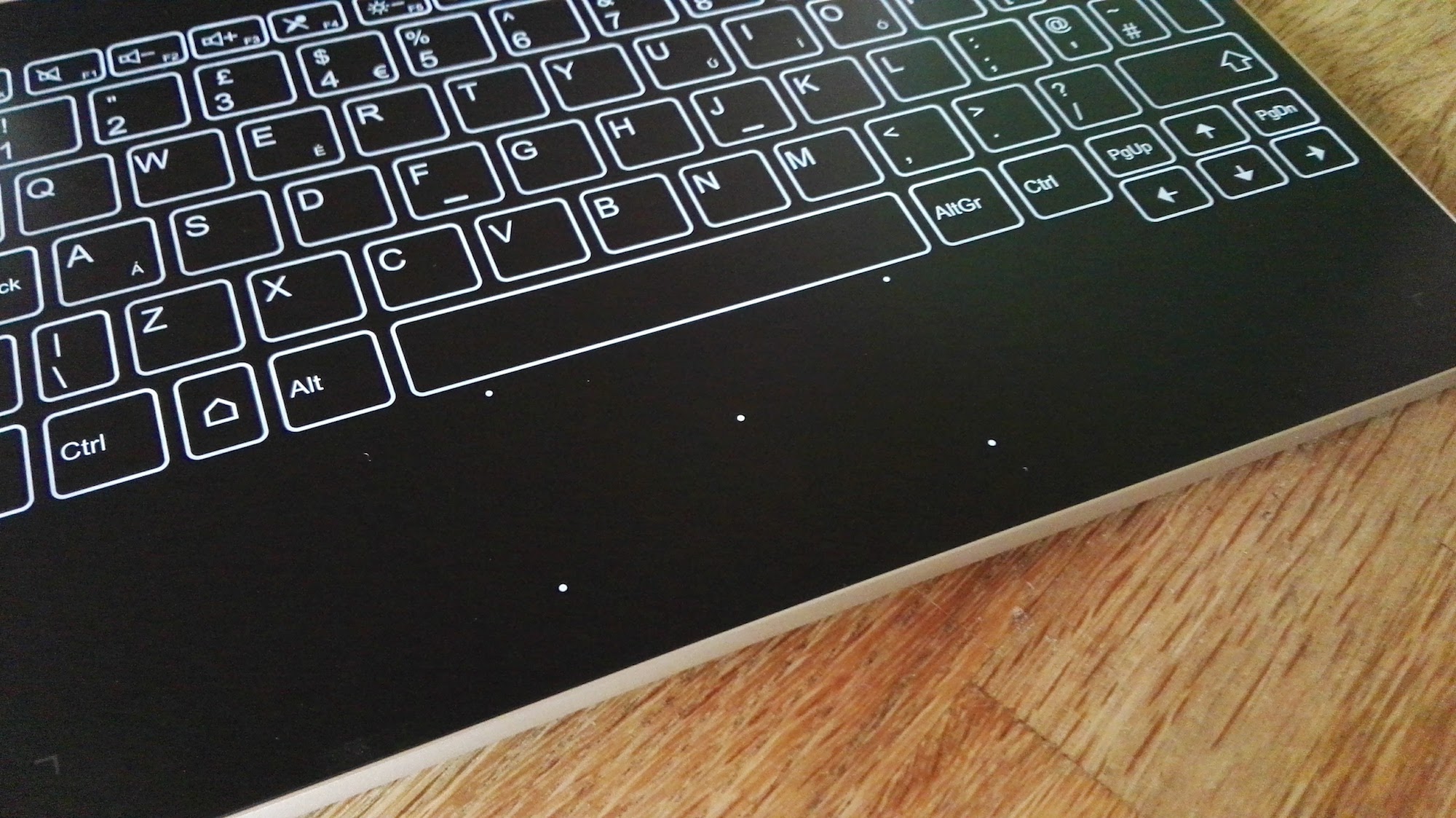 In the UK, you’ll pay somewhere between £350 and £500 for a Yoga Book at retail, depending on offers and whether you opt for the Android or Windows variant. I had the Android model and the presentation – from the unboxing to the hardware itself – feels more premium than this price would suggest.

The question is, does the user experience match that high-end first impression?

The Yoga Book’s unique selling point is the dual function of its lower touch panel. In keyboard mode, it illuminates to show the outline of a traditional laptop keyboard and trackpad. However, press the little pencil icon, and the keyboard disappears, transforming the darkened panel into a graphics tablet-style writing surface. Furthermore, this writing surface can detect input even through the thickness of a paper notebook, allowing users to write with an actual pen – on actual paper – and have their notes recorded directly to the screen.

The hybrid function of this lower panel is – theoretically – what sets the Yoga Book apart.

While Apple’s iPad Pro and Microsoft’s Surface support a similar type of pressure-sensitive stylus, they do so only through their main displays. The Yoga Book is also distinct from the iPad Pro in offering this as part of the basic package, whereas Apple requires the purchase of an extra accessory, the Apple Pencil.

Unfortunately it is in this key area of differentiation that the Yoga Book is troubled by a mix of uninspiring software and some fundamental usability concerns. When using the stylus in digital mode, the writing surface seemed out of alignment with the input on the screen, particularly at the edges of the panel. There are faint crop marks printed on the tablet area as guides, but even when staying within these, I sometimes found my pen strokes had disappeared off the virtual edge of the screen.

In paper mode, the problem persisted, even when using the supplied Lenovo notepaper and magnetic notebook holder. This holder does a reasonable job of keeping the paper sheets in place, but when I tried using alternative paper – like some scrap sheets of A4 – I found it slipped easily, meaning the image on screen and the physical pen strokes on the paper quickly become misaligned.

The experience is sufficiently unreliable and cumbersome that I found there were few occasions on which it felt more convenient than simply writing in a paper notebook and photographing the sheets into Evernote or just taking typed notes using the keyboard. If you’re imagining being able to place your existing paper notepad on the Yoga Book and have your handwritten notes seamlessly digitised, you’re likely to be disappointed – it is far from a smooth process.

With practice and care it can be made to work. There are even some clever conveniences like being able to take notes on the writing panel when the screen is off and use a double tap on the pencil icon to initiate a new page. The pressure sensitivity also makes it a useful tool for digital painting.

However, the overall user experience of the Yoga Book’s signature feature lacks the casual freedom of expression which is at the heart of pen and paper note-taking. Ultimately, the benefits of the digitisation approach Lenovo has employed feel outweighed by the compromises they’ve made. 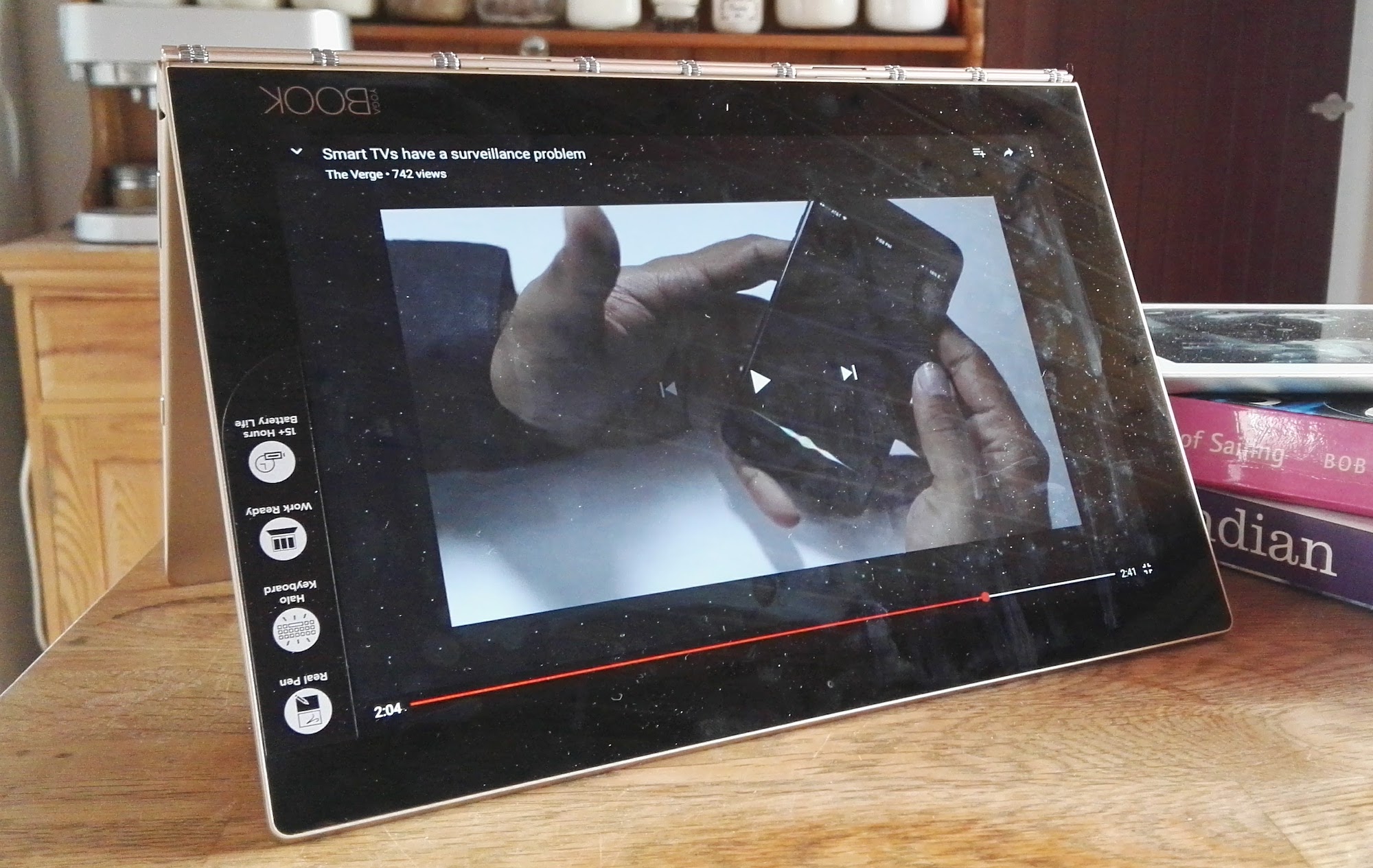 Setting aside the novel pen features, you’re left with an otherwise good quality tablet. The 1080p, 10 inch screen is sharp and bright indoors, although I struggled with reflections in outdoor sunlight. The speakers, boosted by Dolby’s Atmos software, are loud enough that I could still hear podcasts over the noise of a busy kitchen while cooking dinner.

Battery life was impressive. I was averaging about 12 hours of continuous use, mixing web browsing, video and music playback with content creation via both the keyboard and pen input. The Yoga Book seems to be developing a reputation among owners as a workhorse performer in this department and my own experience backed that up.

It felt fast. 4 Gb of RAM and an Intel Atom X5-Z8550 1.4 ghz processor gave unstuttering performance. There were, however, occasions on which I experienced lock-ups or apps closing unexpectedly. This didn’t seem to relate to over burdening the system’s resources, as it was rarely at times when I was trying to do intensive tasks. Instead, it seemed to result from a bugginess in the OS, which persisted even after Lenovo’s latest software update arrived.

Android remains weak as a tablet operating system. Every new version of Google’s OS arrives with another set of promises about improving its suitability for larger, creatively focused devices and each time users have been disappointed. My Yoga Book was running Android 6 in May 2017, with some relatively light Lenovo customisations, but an update to Android 7, with its improved multi-tasking and multi-window support isn’t due until October 2017.

Currently multi-window support is handled by Lenovo’s own Android customisations rather than the core OS and it’s just not very good. Apps can be made to run in their own resizeable windows by double tapping on their header bars, but the gesture itself is cumbersome and not very many apps support the feature. It feels nothing like the smooth, OS-level multi-window abilities of the latest iOS and Windows 10 builds.

Android never really feels like an OS designed for the larger screens of tablets. Basic functions essential to content creation, like the ability to copy and paste between apps or switch rapidly from task to task, are inconsistent and fiddly.

A typical task for me is writing an article where I might want to paste in several images, quotes and link references. It was a frustrating battle on the Yoga Book, complicated by apps which would only display in portrait rather than landscape, text which wouldn’t copy properly from app to app and the flaky multi-window support. This kind of task is still much better suited to a Mac or Windows laptop, despite the form factor similarities. Even after repeated attempts, I was still finding these activities took twice as long as they would on, say, a Macbook. 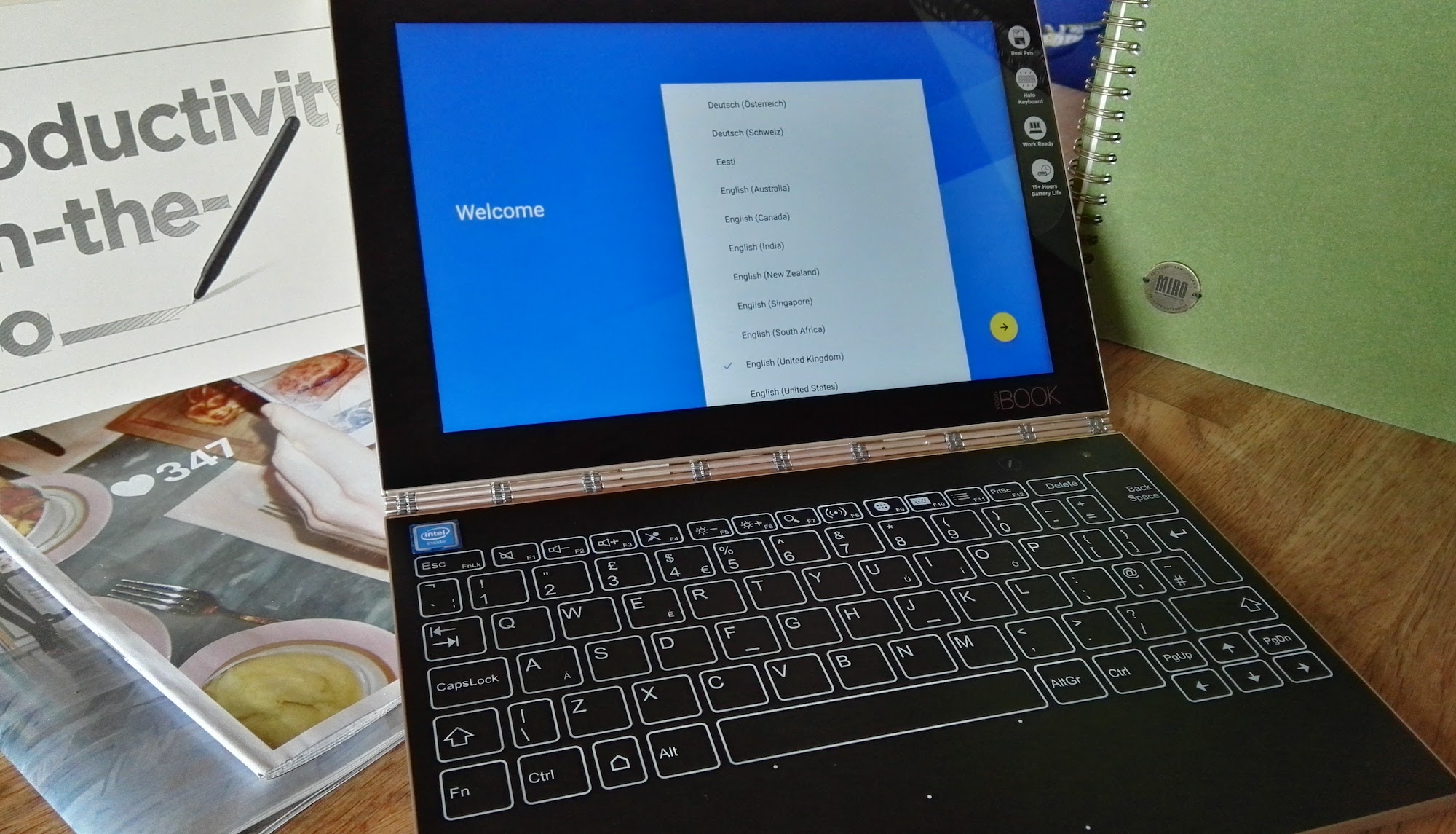 Part of the problem is the keyboard. As cool as it looks, the smooth surface of the dual function lower panel is not well suited to typing. Even with the haptic feedback activated I found myself regularly missing key presses. Lenovo’s built-in predictive text did little to smooth over my mistakes. Installing Swiftkey helped, as this did a better job of guessing what I meant to type when several letters and spaces were missing from each sentence, but I was unable to achieve anywhere near the speed of a mechanical keyboard.

I wanted to like this device and I admire Lenovo’s investment in trying something different. I also believe this concept of a hybrid keyboard, digital stylus and paper note-taking system holds potential for those in the business of content creation. Lenovo should keep iterating.

Overall, however, this first generation Yoga Book on Android is too compromised in too many areas. The stunning, futuristic industrial design just isn’t enough to make up for shortcomings in basic usability, compounded by Android’s weak tablet features. It did not spur me to new creativity or offer sufficient convenience by combining several existing forms of input in a single device – and that, surely, is the point of a product like this? 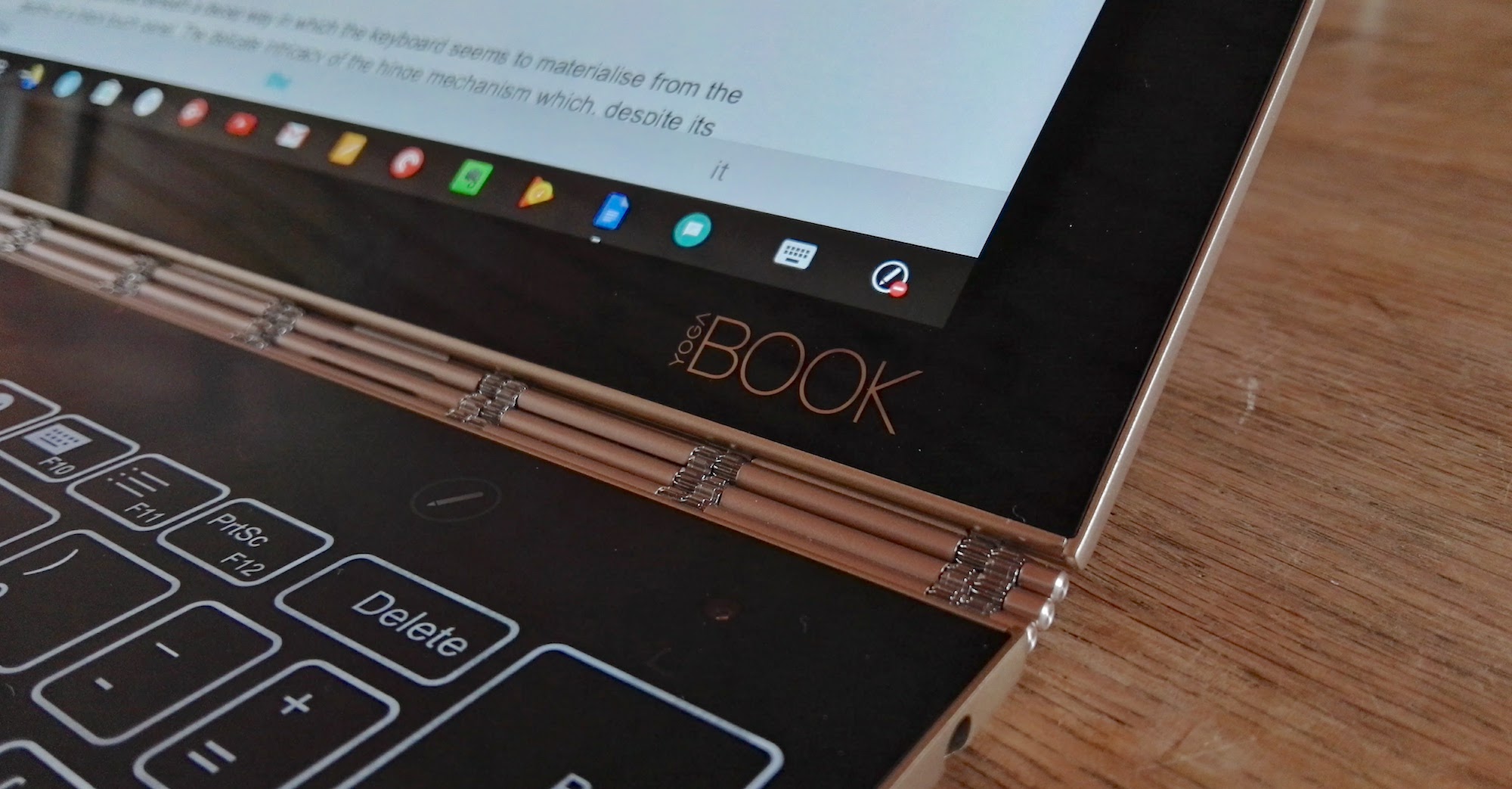